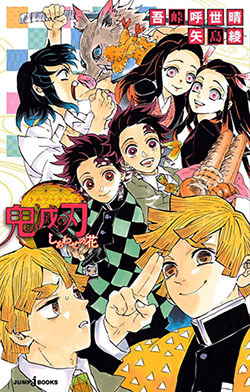 The cover for Flower of Happiness, the series’ first Light Novel, detailing the original cast meeting their Academy selves.
Advertisement:

A different take on the Demon Slayer universe set in motion by the original author, it transplants the cast to modern times, living through normal daily situations instead of battles to the death, with that the whole cast is alive and well in this world, where the once demons are now just mere human weirdos if they were part of the really evil bunch, with some tragic demons being outright good humans in here. Demon Slayer Academy’s plot is usually given as extras at the end of every manga volume, but some special chapters were made specifically for other publications, like the series’ Light Novels.

The anime adapts those events usually as extras at the end of certain episodes; the Valentines Day event, however, originally contained in Flower of Happiness, was originally shown in an Aniplex online streaming event in February, 14th, 2021.

In July 5th, 2021 an official spin-off serial manga was announced in Weekly Shounen Jump; this one authored and drawn by Natsuki Hokami, for the Saikyo Jump magazine in August, 2021.

The eldest sibling of a family that runs a bakery, Tanjiro is a diligent young man who’s beloved by all neighbors, and is well respected at school.

Tanjiro’s younger sister and the second eldest sibling of their family, Nezuko is a charming girl that is always seen with french bread on her mouth, comically impairing her speech.

The emotional rollercoaster at school, Zenitsu is part of the Public Morals Committee, tasked with keeping tabs on students following the academy’s dress code and general guidance. However, he is more worried about being popular with girls, desperately wanting to score a girlfriend.

The town’s popular living attraction, Inosuke was found living in the mountains by himself for a long time, this made him a local news sensation, being seen as a case of real-life imitating fiction.
Middle School: 1st Year

Three girls who are very fond of their senpai Shinobu, they are trying to create a Pharmaceutical Research Club for middle schoolers.
Middle School: 2nd Year

The prodigy twins, Muichiro and Yuichiro are part of the Shogi Club and are already professional players. Despite practicing a sport that doesn’t require physical strength, the twins are secretly very strong, but aren’t aware of it, but they made use of their innate abilities by catching a pervert on a train once. They are absurdly popular with girls, but they don’t care much about that, preferring to live in tranquility.
High School: 1st Year

Member of the shooting club, Genya is a masterful sharpshooter but sucks at mathematics and the latter is the source of his frustration. Genya wants his big brother to compliment him, but Sanemi doesn’t care about his little brother’s shooting as he wants Genya to be good at math. One time, Sanemi even ripped Genya’s shooting champ certificate to show how much nothing but math is important to him. Genya’s hairstyle is against the school’s regulations, but it is believed Genya can read the wind to aim better with it, so he is given special permission to keep it.

Member of the handicrafts club whose family owns a dojo. Is married to Hakuji after a childhood marriage promise. Her nickname is Hime.
High School: 2nd Year

Member of the Flower Arranging Club, Aoi's family works in a restaurant and she often helps them out.

Gyutaro’s younger sister, a rowdy girl who takes part with her brother in delinquent behavior, she is extremely popular for her beauty, once scoring a record of being confessed to 20 times in a single day. Ume can’t stand Nezuko and is often butting heads with her.
High School: 3rd Year

One of the very popular students in the Academy, Shinobu is seen as very beautiful and intelligent, she is part of two clubs: the Pharmaceutical Research Club and Fishing Club. She is very proficient at both due winning several interhighs under their banner. She's on friendly terms with the Flower Arranging Club as their clubs are close by.

One of the academy’s popular beauties, president of the volleyball club. In this setting "Susa" and "Maru" are separate names, Maru is her name, Susa is the family name.

Senior in the same class as Susa Maru, Yahaba is the president of the Archery Club. His family runs a Tofu Shop.

Ume’s older brother, a very notorious delinquent, always causing trouble around has earned him quite the infamy, he is very protective of his sister. Gyutaro can’t stand Tanjiro and is often trying to clash with him.

Member of the handicrafts club. He made a childhood promise to marry Koyuki because they're neighbors and their parents agreed to it, they're married. He's planned to inherit Koyuki's family dojo. His nickname is Hakuji-dono.

One of Kibutsuji's spies sent to oversee the Academy, seems like a nasty grumpy fellow.
Graduates

A college student specializing in art, Mitsuri is a cheerful person all-around. She loves art and hopes to make people happy with it. Mitsuri is very popular with the boys, but she is somehow unaware of that. She wants to have a boyfriend.
Teachers

The Physical Education teacher, a very strict man, always making sure the students follow the academy’s rules. There are gossips about him being not being well liked by others, considering he eats his lunch all alone. Because he's such a spartan, he's been getting complaints from the PTA.

History Teacher, a very passionate man about the class subject, Kyojuro goes as far as taking his students to partake in mock calvary battles for his lessons. All the students love him and no one has bad grades in his classes.

Arts Teacher, he loves explosions and thinks of them as “art”; Tengen is extremely popular with girls, being showered with chocolates every Valentine's Day. Still, he is not hated by the boys, many see him as a supporting big brother type of teacher; he is a seasoned fighter, being a delinquent during his school days.

Biology Teacher, she is the sweetest Teacher at the academy and known by all, Kanae is a graduate from it, amassing quite the popularity ever since her student days as one of the most beautiful girls around and that claim now persists as a teacher, boys and girls all like her, even those who try to speak ill of Kanae can’t help themselves but to feel apologetic right after; Kanae is the advisor for the Flower Arranging Club, the one she was once part of.

Mathematics Teacher, a very rough-looking man, Sanemi doesn’t like how stuffy it feels to button up his shirt all the away, so he leaves it bare like that. The man takes Math very seriously and won’t tolerate anyone being bad at it or daring to say it is useless on daily life, one student got punched to the sky for it. Many students don’t like him, and were even planning to gang up on him, but after the punching sky high incident, no one would dare. Still, Sanemi is very kind to elders, women and kids, even if some children cry in fear when approached by him; Kanae is often talking with him, getting on his good side.

Music Teacher, he primarily uses a drum during his classes, despite being able to play many pieces it seems Kyogai is quite bad at reading music sheets.

Chemistry Teacher, because he's allergic to woman, he wears a face mask and even is rumored to keep a snake on his shoulders to avoid contact with women. He's a frequent visitor to Aoi's family's restaurant, but only ever orders tea and frequently confirms if a girl with braids is there or not. Students who fail his tests are crucified to a post and shot with bottle rockets.

Civics Teacher, a very muscular man. Students were afraid of him because of the latter at first, but after discovering his belongings generally have cats on them, opinions changed. There are many incidents of people calling him dad.
Academy Staff

The Academy's janitor, well liked by the students.

Three women who work at the School Store and Cafeteria; Suma works at the Store, she is quite clumsy sometimes getting the change wrong; Hinatsuru and Makio work are the cafeteria, Hinatsuru is a great cook and has great sense of taste, Makio is very fast at serving the food, she has quite the temper though. All three of them are nicknamed Kunoichi by the students, for they have the looks to be as seductive as one.

The Academy's Vice-principal, Nakime is an extremely quiet woman, easily blending into the scenery, barely anyone notices her presence; she is actually one of Kibutsuji's spies.

A train otaku, Enmu is quite the hardcore lover of trains, but he is one of the creepiest ones, walking around suspiciously with his camera in hand. He is soon taken by the local authorities for his questionable activities.

Con Artist extraordinaire, a shady man whose real name and age are unknown, people only know him as “Doma”. He specializes in marriage scams, seducing women to his liking and getting away with it. However, one day, he tried to fool a certain pink-haired braided woman. She didn’t take his scamming lightly once she realized what was going on. Doma hasn’t been heard from ever since.

First name unknown, Kibutsuji is an ambitious politician with the sole goal of conquering Japan, through whatever means necessary, he employs all manner of lackeys to infiltrate key locations in society to expand his influence over the country.

Kibutsuji's secretary, a mysterious and quiet man, dressed in a black suit, concealing his eyes with sunglasses at all times; no one knows his real name nor his age.