The various characters of the world of Deltarune.

As with the main page, all spoilers are unmarked. Due to the ties of various elements and cast members derived from Undertale and the game expecting you to at least have some familiarity with it, spoilers involving Undertale are also unmarked.

The main protagonist. Described by residents of their town as creepy, distant and quiet, Kris is the only human living in the monster town of Hometown with their adopted family, the Dreemurrs. They live a peaceful life until they fall into the dark world with Susie, after which their life begins to turn upside-down. 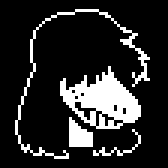 A monster who goes to the same school as Kris. She's known for being violent and a troublemaker. 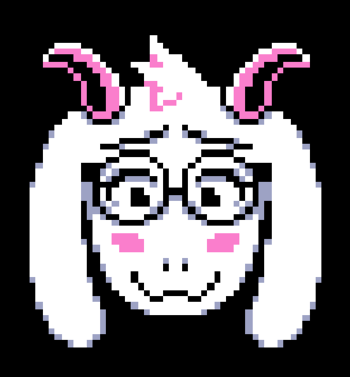 to see him without his hat.

The Prince of Darkness, who's been waiting for a very long time for a Human and Monster to fulfill the prophecy and become part of the Delta Warriors. 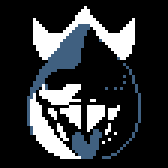 The ruler of the Card Castle, the King of Spades is Lancer's father, and the one trying to halt the progress of the Lightner heroes. 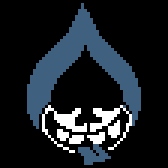 The prince of the Card Castle. A guy who really, really wants to be evil, and yet is incredibly bad at it. 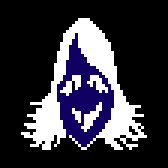 The Duke of Puzzles appointed by the King to stop the heroes from traversing his Card Castle. He has a lot of bombast that doesn't quite make up for his lack of skill in making puzzles.

"Begone! We have found fresh purpose. For the KNIGHT has appeared."
— King

A greater force at work, having created the second Fountain of Darkness that Ralsei mobilizes Kris and Susie to go shut down. King has seemingly sworn his fealty to the Knight. 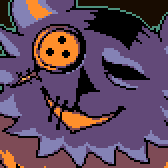 "Around here, you learn to pass the time... or go mad, like everyone else." 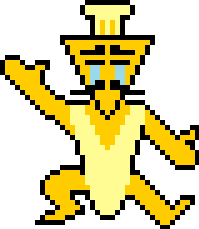 An overly dramatic patissier whose cake was destroyed by a certain purple beast. 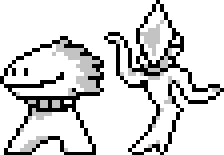 Mr. Elegance on the left, Mr. Society on the right.

Inhabitants of the Great Board. They later help fix the Door to Before in the Forest that allows you to travel quickly between certain locations.

A master smith who lives just near the bake sale in the middle of the forest.

"Long live the guys who pay us!"

An ambivalent, gem-loving species that represent the diamonds suit in playing cards. Rudinns patrol the fields, while Rudinn Rangers are soldiers in King's Card Castle. 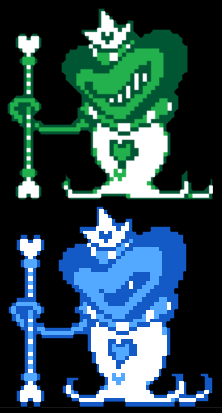 Tentacled monsters that represent the hearts suit in playing cards. Hathys occupy the same area as Rudinns while Head Hathys stay in the Card Castle.

Timid mousenarys that serve as guards for the King, though they'd rather be doing anything besides fighting.

Pawn-like sentrys occupying the Great Board connecting the field and forest areas. They initially appear as statues before springing to life to ambush Kris and company.

A carefree checkers piece who gets a taste of Susie's aggression before returning on the Great Board, where it receives a crown that transforms it into the larger, stronger King Round (or K. Round). It appears again at the end of the Card Castle as a last resort from Rouxls Kaard.

Lethargic rabbit slimes covered in a mass of dust, which can be blown off to reveal that they're much smaller and more energetic underneath it all. 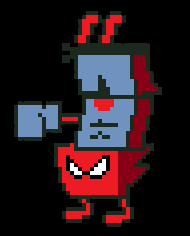 Bunny boxers who fight by throwing around building blocks. They'd be a lot less aggressive if their body parts weren't all mixed up.

A three-headed monster who's the sole representative of the clubs suit (aside from the imprisoned clubs king) and happens to be celebrating her birthday on the day the Delta Warriors arrive. Her only interests are sports, cute boys, and trees. 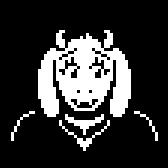 "Kris, if you do not wake up, we will be late for school!"

Kris and Asriel's mother. She is also a teacher for a younger class at the school.

"After the excitement of university... Will he still enjoy coming home to this little town...?
— Toriel

Kris's older brother who's away at college, but is coming home to visit soon. 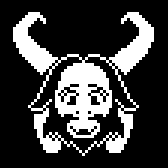 "Perhaps when Asriel comes home... We could all go to the diner, just like old times..."

Kris and Asriel's father, and the kind owner of a small flower shop. He had a falling-out with Toriel some time in the past. The more things change... 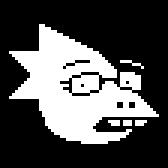 "I'm the cool teacher, y'know. You're not in trouble."

One of the teachers at Kris' school... at least, she tries to be. 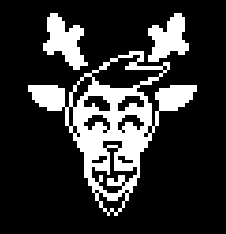 Noelle's father, and husband to the mayor. Currently hospitalized for an unspecified illness. 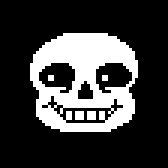 "yeah, it's real nice, isn't it? especially considering i've never met you before."

The owner(?) of a local grocery store(?) who just moved into town. 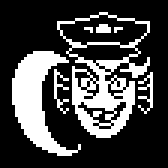 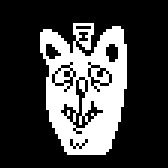 "Wanna chat for a minute before I lose my mind?"

A long-suffering employee at ICE-E's P"E"ZZA. Has a dour outlook on life.

(No response... but the distant trousle of bones.)

Sans's little brother who just moved into town alongside him.

My apologies, beautiful. I'm afraid I'm a bit of a nobody.

A ghost who doesn't leave the house.

(Seems like the police aren't really feeling it right now...)

A ghost who mans the local police station.

A Purple anthropomorphic cat and older sister to Catty. 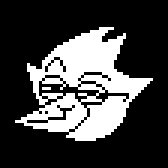 A blue anthropomorphic bird. The (self-proclaimed) smartest guy in class. 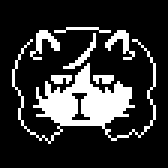 The younger sister of Catty. Pays more attention to her phone than to her surroundings. 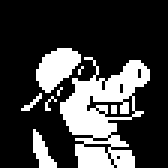 "We SEEM different, but me and Catti have a TON, In common!"

A snake with a cool hat. 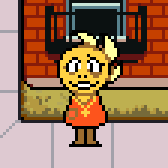 An armless, young reptile monster who attends the same class as Kris. 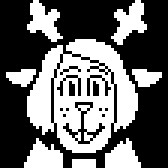 The timid daughter of Rudolph Holiday and the second smartest student in class. 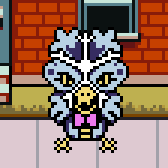 A young Snowdrake infamous for telling the most awful puns. Always speaks in a ridiculous cowboy accent. 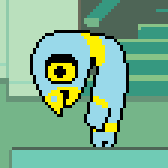 "I love reading books. Especially the ones upstairs. You should really read them!"
A monster that loves books. 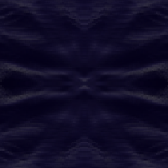 The disembodied voice who speaks to you during the opening, and the one who revealed Deltarune to the public. There are a few hints that heavily imply that it may be W.D. Gaster, the erased character from Undertale, although they haven't confirmed it themselves. Whoever they may be, they definitely play a significant role in the larger scale of the story. 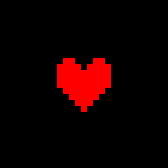 THEN, THE FUTURE IS IN YOUR HANDS.

The SOUL that drives and unites the Three Heroes in their quest to banish the Angel's Heaven. For one reason or another, this is the Player's method of interacting with the world through Kris, the current vessel it inhabits.

The Man Behind the Tree

The Man Behind the Tree 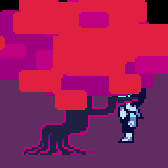 (He is behind the tree.)
In the forest, if you re-enter the room with the bird that chases you from the invisible tree puzzle room, you may rarely find yourself in a strange room. The room has a tree with a man behind it. The man offers Kris something. Accepting his offer results in receiving an egg. Declining it results in a message saying he needn't be there. Either way, there is not a man behind the tree.

WARNING: These characters are all Walking Spoilers. 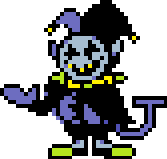 A clown-like entity that is imprisoned in Card Castle on the "??????" floor. Various sources indicate that he was imprisoned before the current crisis with the King began. He doesn't seem to follow the rules of reality very well.

"SOON, THE "QUEEN" RETURNS, AND HELL'S ROAR BUBBLES FROM THE DEPTHS... LIGHTNERS, CAN YOU STOP IT?"
— Jevil

An as-of-yet unknown antagonist, only known so far as the "Queen" and presumably working with the Knight. She is only mentioned if you defeat Jevil using force of arms.