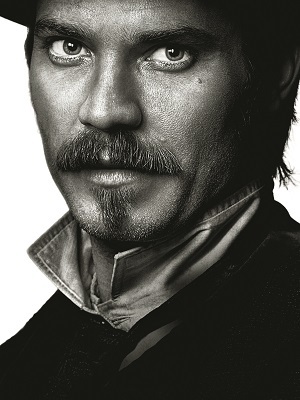 A native of Ontario and the son of a stern British sergeant-major, Seth Bullock left home for good at the age of sixteen and ended up in Montana during the silver strikes of the 1860s. A natural leader, he held a number of elected positions in his early twenties and was eventually appointed Sheriff of Montana Territory.

Having heard of the big strikes in the Black Hills, Bullock has made his way to Deadwood not to prospect, but to open up a hardware franchise with his business partner and friend Sol Star. But while his intent was to become a merchant, Bullock's staunch ideas of right and wrong soon pull him back toward law enforcement. 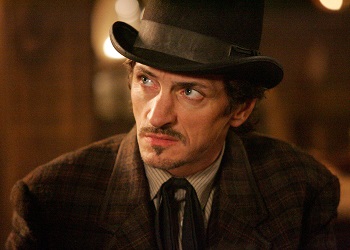 "People have made good lives out of borrowed ones before."
Played By: John Hawkes
"Even in an Eden like this, wrongs sometimes occur."

Solomon "Sol" Star is Seth Bullock's best friend and partner in the hardware business and the only Jew in camp. He is from Vienna, Austria. Imperturbable and sensible, Sol has become a rising force in the camp. 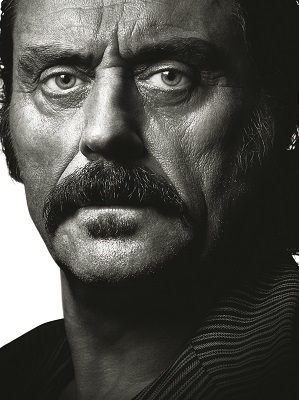 "Welcome to fucking Deadwood! Can be combative!"
Played By: Ian McShane
"Every fuckin’ beatin’ I’m grateful for. Every fuckin’ one of them. Get all the trust beat outta you. And you know what the fuckin’ world is."

Albert "Al" Swearengen is the proprietor of the Gem Saloon, born in England but raised in a Chicago orphanage under an abusive figure known as Mrs. Anderson. He mentions on occasion that Mrs. Anderson ran a brothel at the girls' orphanage before running the boys' orphanage. Swearengen was among the first settlers of Deadwood, earning him several land claims and a position of power. The Gem Saloon, offering alcohol, prostitution and faro, also acts as Swearengen’s base of operations.

Swearengen is cunning, manipulative and initially appears to be the most cynically amoral of all the characters, showing no hesitation in resorting to violence and murder when it serves his business interests. 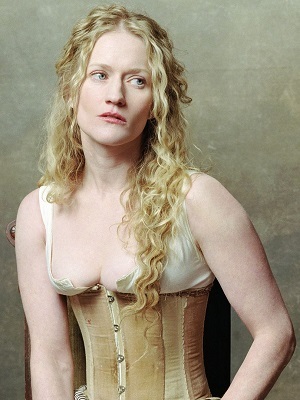 "Tread lightly who lives in hope of pussy."
Played By: Paula Malcomson
Sol Star: I don’t understand.
Trixie: You wouldn’t. You’re too fucking healthy-minded. You’ll sit here waiting for me to materialize from a piece of fucking furniture and think the world is normal.

Trixie is Al Swearengen's favorite girl at the Gem. Swearengen is often abusive toward her, but she always returns to him and he in turn often shows great affection for her, though not openly. 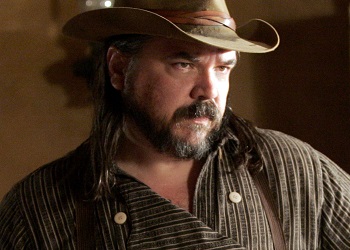 "I have come back from plenty of shit that looked like it was going wrong."
Played By: W. Earl Brown
"Do not put unauthorized cinnamon on the goddamn meeting table! That’s all the fuck we need."

Dan Dority, probably based on the real-life Dan Doherty, is Al Swearengen's right-hand man. A former bushwhacker, he has been with Al for years and serves him as bodyguard, enforcer and killer. While violent and short-tempered he is not a heartless killer. 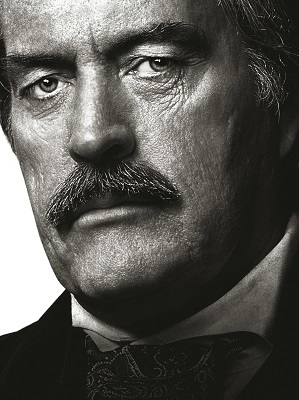 "You can help your delicate sensibilities by turning the fuck away."
Played By: Powers Boothe
"How about a nap, a bath and sex with a unfamiliar woman?"

Al Swearengen's worst nightmare came true when Cy Tolliver brought his own den of gambling and whoring to Deadwood from Chicago. Tolliver's Bella Union is a high class joint, offering more refined and well-kept prostitutes along with sophisticated gaming, including craps.

A former riverboat gambler, Tolliver has been around, and he sees the unlimited earning potential the lawless town of Deadwood offers. Having done his homework and placed his own spies in town, Tolliver quickly establishes that he's not afraid of going head-to-head with Al, and he is just as calculating and wily as his competition. 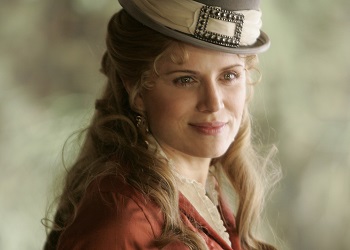 "I wish once I could care for those little ones. Just once instead of doin' what I did."
Played By: Kim Dickens
Jack Langrishe: The blessed Miss Stubbs, whose bust is so very prominent in the mind's pantheon of the camp.

Joanie Stubbs is Cy Tolliver's former madam at the Bella Union. Joanie, unlike Trixie, acts only as the hostess, and not as a prostitute herself. Although she is a lesbian, Stubbs has a long relationship with Cy and is one of the few people Cy cares for, though his increasingly unpredictable and violent behavior sours their friendship. Often depressed and self-loathing, she was apparently bought by Cy from her own father, who had abused and pimped her and her younger sisters as prostitutes. Joanie also reveals that her father used her to coerce her sisters to sleep with him—to "see to his needs since mama was gone." As a result, the emotionally scarred Joanie is weighed down by guilt. 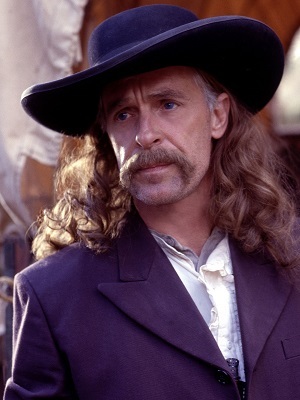 "Will you let me go to hell the way I want to?"
Played By: Keith Carradine
"You know the sound of thunder, don't you, Mrs. Garrett?"

James Butler "Wild Bill" Hickok has a reputation as one of the fastest gunslingers around. He arrives in Deadwood as a weary man who seems determined to let his compulsive drinking and gambling take over. With him are his friend, Charlie Utter, and devotee, Calamity Jane. He has apparently come to prospect but despite Charlie Utter's attempts to persuade him to do so, he shows no interest and scolds Charlie for not leaving him be. 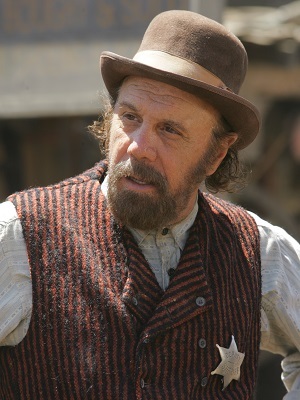 "So I - I don’t know what the fuck to do! But you know I’ll— I’ll keep tryin'."
Played By: Dayton Callie
"Ohhh, I see you got your big fuckin' knife there, and hid somewhere on your persons you've probably got some pussified shootin' instrument. But I am good at first impressions, and you are a fucking cunt, and I doubt you've fought many MEN, maybe even ONE!"

Charles "Charlie" Utter is the good friend of Hickok and Jane, and Hickok's sometime business partner. He runs a mail and freight business in the camp and is also one of Bullock's deputies. He is an honest and uncomfortable person with a kind and generous nature. Incredibly noble, he is also tough and fearless in the face of adversity and not afraid to speak his mind clearly. 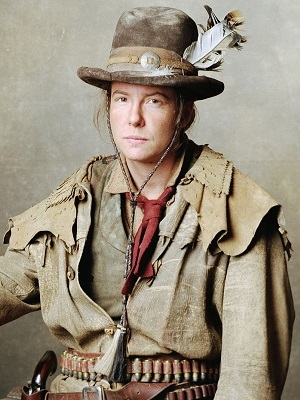 "Everyday takes figuring out all over again how to fucking live."
Played By: Robin Weigert
"I drink what I’m able. If that comes to much, that’s the day’s affair and the liquor’s."

Born Martha Jane Cannary, Calamity Jane is nearly as famous as Hickok was and is known to be as tough as any man in the West. Raised in the mining camps of Wyoming, she is a legendary horsewoman and crack shot, and is rumored to have been an Army scout for Custer. 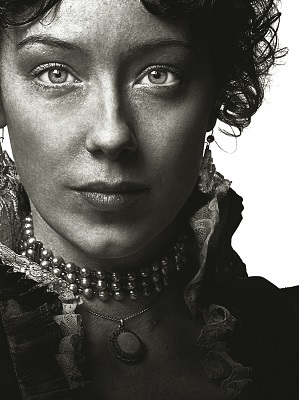 "I don't think we should linger here."
Played By: Molly Parker
"I've wished sometimes only to play checkers or to occupy myself some other way than having to see and feel so much sadness, or feel every moment how difficult things are, to understand or to live with."

Thirty and beautiful, Alma Garret married after the panic of 1873 to salvage her father's strained finances. Preferring a fool's errand to the circumstances of New York society, she came west with her husband, Brom, to prospect, a woolly situation she softened with liberal use of laudanum. 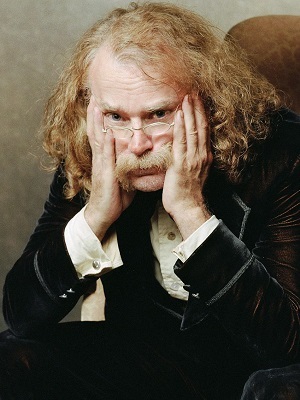 "Leave the demons to God and trust the pain to me."
Played By: Brad Dourif
"I'd rather be lucky than smart."

A witness to unspeakable atrocities on the battlefields of the Civil War, Dr. Amos Cochran is one of the few honorable men in Deadwood. He takes his duties seriously, even gruffly, and does what he can to preserve human life.

"Goddammit, Swearengen, I don't trust you as far as I could throw you, but I enjoy the way you lie."
Played By: Jim Beaver
"I may have fucked up my life flatter'n hammered shit, but I stand here before you today beholden to no human cocksucker, and holdin' a workin' fuckin' gold claim, and not the U.S. government tellin' me I'm trespassin', or the savage fuckin' red man or any of these other limber-dick cocksuckers passin' themselves off as prospectors had better try and stop me."

Whitney Conway Ellsworth is an experienced prospector who has pursued the color all over the country, even having once worked as a miner at wage and an overseer on sites owned by the Hearst mining company. Having left his position with the company, disgusted at the nonchalant attitude to the well being of the miners, he is introduced in the first season as one of the many individuals who has traveled to the town with the promise of wealth in the gold rich hills, revealing himself to have a 'dead-eye' for the color having successfully managed to eke out a comfortable living in this profession. 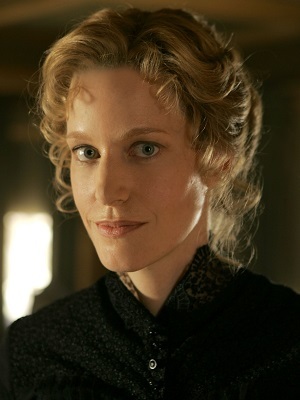 "Do not sacrifice further on my account, Mr. Bullock. I reject the offering. I repudiate it! I find it poisonous!"
Played By: Anna Gunn

Martha Eccles Bullock is Seth Bullock's wife and former sister-in-law. Seth's brother Robert had been a cavalryman and died while fighting comancheros in Texas. Bullock felt obliged to marry and take care of the widow and orphan, although he is not actually romantically involved with her. This was the custom of the time so many children would not grow up fatherless after the Civil and Indian wars. She feels a confusing mix of gratitude towards Bullock, perhaps even romantic love for him, but wishes he not sacrifice his own happiness any more than necessary to provide for her and her son. 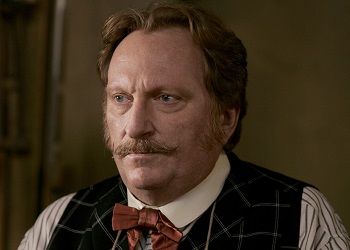 "I'd make the less exalted claim, as a journalist, of keeping my opinions to myself."
Played By: Jeffrey Jones
"Timid, huh. Hardly, sir. My own strong personal impulse was to offer my name for office but a fourth estate, independent in name and fact from the operations of government is of the essence of a free society."

A. Walter "A. W." Merrick is the proprietor of the local newspaper, the Black Hills Pioneer. Somewhat pretentious in his bearing, he prides himself as a newspaperman with a duty to print the truth, but must navigate a twisty path of remaining friends with all the major players in town and being privy to their plans and confidences. He gains the friendship of Seth Bullock, Sol Star, and Charlie Utter, and even suggests that since he enjoys walking and socializing with them about the local goings on, that they should form a club for doing just that. 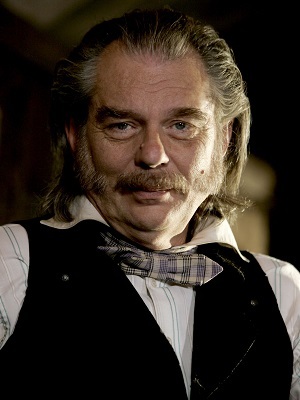 "Knowledge is overrated, William. Diligence is what’s required in the service of a willing spirit."
Played By: Leon Rippy

Thomas "Tom" Nuttall is proprietor of the No. 10 Saloon which is the site of Wild Bill Hickok's murder. (The saloon is named for its address on the camp's main thoroughfare.) One of the first settlers to arrive in Deadwood, arriving before even Swearengen, he has grown increasingly disillusioned with the camp and its future and has gone as far as to consider selling his saloon and leaving the camp. 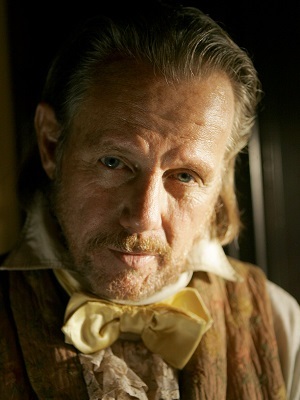 "Al Swearingen's a cue and Farnum merely is a billiard ball."
Played By: William Sanderson
"The bald contempt of it! Why not come out five abreast cavorting and taunting 'E.B. was left out! E.B. was left out!'? Cocksuckers! Cuntlickers! Make your filthy gestures. Public service was never my primary career..."

Eustace Bailey "E. B." Farnum is the proprietor of the Grand Central Hotel and self-appointed mayor of the town, a role he inhabits with comic opera buffoonish seriousness. He is totally controlled by Swearengen, although he harbors delusions of potential grandeur for himself. He is incredibly greedy — costing Al the chance to buy Alma Garret's claim due to low offers — and continually asks prying questions to people around town, leading to numerous abuses and threats directed towards him.