Characters / DARLING in the FRANXX - Plantation 13

Due to wiki policy, trope names will not be spoiler tagged. Reader beware. 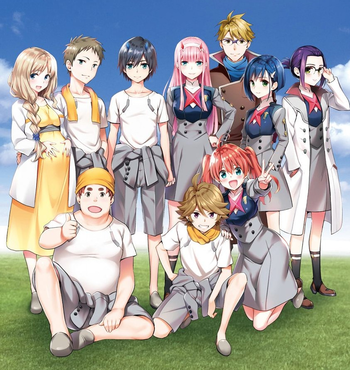 All Parasites of Plantation 13.
List of Parasites
The Franxx
Franxx in General
Strelizia 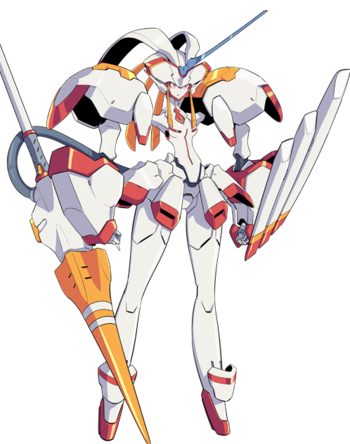 The main Franxx in the show and is piloted by Hiro and Zero Two. It is equipped with a giant spear called "Queen Pike" to battle with klaxosaurs.

The Franxx piloted by Goro and Ichigo. As the Franxx for the squad leader, it is armed with two sword type weapons named "Envy Shop."

The Franxx piloted by Zorome and Miku. As a Franxx that specializes in close combat and speed, it is loaded with a fist claw type weapon called "Knight Claw."

A heavy weaponry Franxx piloted by Futoshi and Kokoro. It is covered with heavy armor and is loaded with bayonet type artillery named "Rook Sparrow," which can cause great damage at close distances.

A support type Franxx for long distance attacks, piloted by Mitsuru and Ikuno. Its arms are equipped with the heat sink called "Wing Span," which allows it to fly for a long time.

Strelizia Apus, Dr. Franxx's "work of works", is an absolutely titanic Franxx made from the converted form of the Klaxosaur superweapon Star Entity.

A caretaker assigned to take care of the Parasites of the 13th Plantation Corps.

A Plantation Defense Commander responsible for coordinating the Parasites during missions.

007/"New Nana"
Voiced By: Shizuka Itō (Japanese), Kristen McGuire (English), Sílvia Tarín (European Spanish)
007(or, as she is better known,"New Nana"), is the real Nana's temporary replacement after she is forced to resign from her duties as Plantation 13 caregiver. This is due to her receiving her old memories back after being triggered by Kokoro's statement about human relationships and reproduction.
Others
Code:703/Naomi

Hiro's previous partner, who failed out with him.

Ai is Mitsuru's and Kokoro's daughter, and the first naturally born child after APE's departure.