Women and men; soldiers and outlaws; fools and corpses. All will find their way to us now that the road is clear.
—The Ancestor 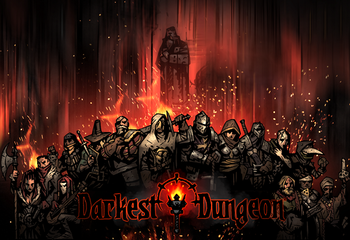 The playable characters with which you can build your exploration parties. They came to the Darkest Estate for their own reasons and can be recruited to fight off the hellish horrors of the Darkest Dungeon. Under your leadership they band together, putting at risk both their bodies and their minds...

The Classes as a Whole
The Abomination 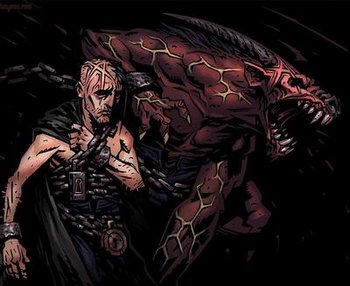 "I fear no demon, for the greatest monster lies inside!"
"Tortured and reclusive… this man is more dangerous than he seems."

Beaten, branded, and imprisoned for untold decades, this furtive vagrant hides a terrible secret. The eldritch poison coursing through his veins has given him unspeakable power, at a terrible cost. As his form changes, so too does his role in combat! 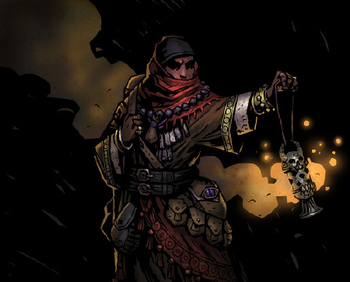 A scholar, researcher, and keen archaeologist, The Antiquarian is not well-suited for combat. She is, however, an expert in self-preservation — by making herself scarce in a fight, or demanding an ally protect her, she ensures her survival. If direct combat is unavoidable, The Antiquarian can use her fulminating censer to heal and invigorate allies… and to toxify her attackers. 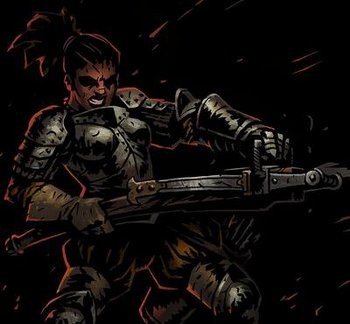 "A bloody good shot!"
"Shoot, bandage, and pillage: the dancing steps of war."

A runaway turned soldier, the Arbalest is the definitive backline fighter. Able to rain suppressing fire on the enemy, snipe high-profile targets, and apply powerfully effective first-aid, she is a rallying point, a turret, a beacon in the dark. 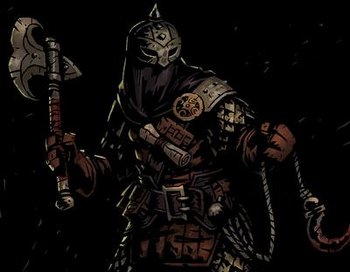 "Called your bluff, friend."
"The thrill of the hunt… The promise of payment."

A brutally efficient single-target executioner and crowd control specialist. For the Bounty Hunter, planning is key — mark targets for bonus damage or look for opportunities to capitalize on a stunned foe. He can also wreak havoc on an enemy party's order using his grappling hook, flashbangs, and powerful uppercut. 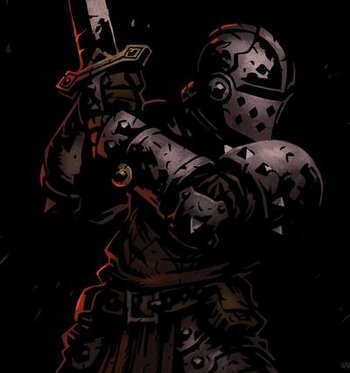 "Be judged by the light!"
"A mighty sword arm anchored by holy purpose."

Battle-hardened and stalwart, the Crusader has held the front lines in a hundred holy wars. He either attacks foes head-on with righteous fury, or embraces a melee support role by leveraging his powerful defensive buffs & off-heals. 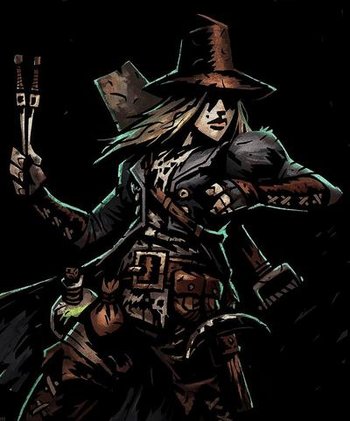 "Grr! You bled on my best coat!"
"To those with keen eye... Gold gleams like a dagger's point."

The Grave Robber is a versatile and nimble combatant, moving back and forth through the ranks with ease. She strikes without warning and retreats to the shadows, continuing her assault at range. If her throwing daggers and poison darts aren't getting the job done, she can return to the melee, buffed and slinging her pickaxe! 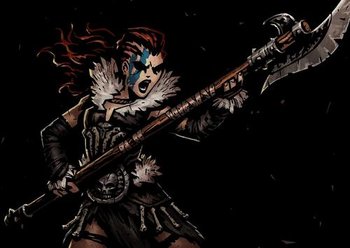 "I will FEAST on your HEART!"
"Barbaric rage and unrelenting savagery make for a powerful ally."

Wild, unpredictable, and utterly ruthless, the Hellion lives for the thrill of spilling blood! Her massive glaive affords her impressive reach in combat, while its razor-sharp edge leaves lasting wounds on enemies. Certain skills leave her exhausted, however, and she may occasionally need to take a turn to recharge her adrenaline before entering the fray once again. 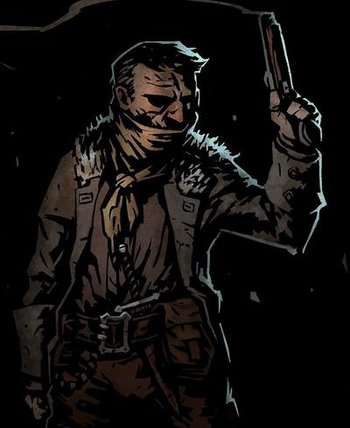 A rogue, a thug, and a thief, the Highwayman has honed his skills with dirk and flintlock to devastating effect. Whether at range or in a melee, he is equally effective at dispatching his foes. Be it a grapeshot area-of-effect, or single-target bleed, the Highwayman's skills focus solely on dealing damage in a variety of ways. 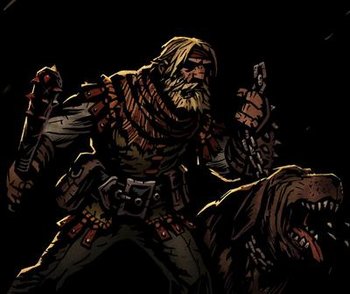 "For Justice!"
"A lawman and his faithful beast, a bond forged by battle and bloodshed."

A tough and uncommonly compassionate ex-lawman, the Houndmaster and his faithful Wolfhound work in tandem to bring down their enemies and protect the innocent. Together they stalk the back ranks, bursting fourth in a flurry of harrying bleeds, gnashing teeth, and stunning blows. Should the tide of battle turn, the pair can support the ailing party by protecting the weak and rallying the stressed. 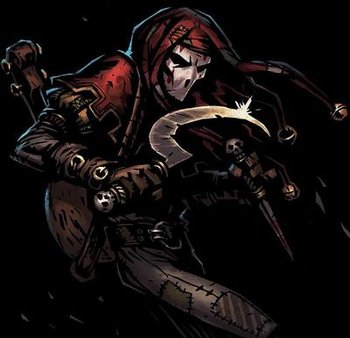 Combat is a power-ballad — a slow build up, and a grand finale! On offense, the Jester leaps to and fro in a bloody cacophony, positioning himself for a glorious end in the front ranks! Alternatively, he can hang back, delivering chilling melodies and unsettling riffs that terrorize his foes, and give strength to his allies. 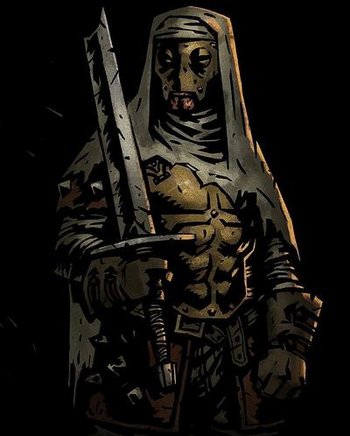 "The tide rises. And the tide falls."
"This man understands that adversity and existence... are one and the same."

A ruined man, a warrior, and a poet. The Leper is most effective when given a turn to focus himself before raising his massive blade. When he swings, it is all or nothing — crushing blows and massive damage or the empty whistling of a glancing blow. He is entirely self-sufficient, drawing strength from his life of trauma, and able to channel it into heals, protection, or unrelenting fury. 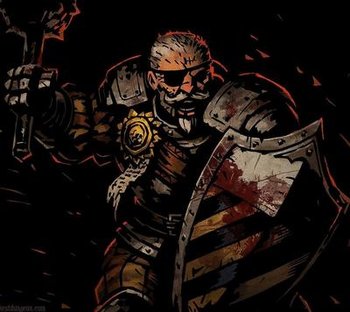 "We hold as one and strike as one!"
"The raw strength of youth might be spent… but his eyes hold the secret of a hundred campaigns."

The Man-at-Arms is a seasoned veteran of combat, and has been rewarded for his toil with haunting guilt and stoic resilience in equal measure. Immovable, commanding, and focused, the Man-at-Arms breaks down enemy lines with his mace, buckler, and furious battle cries. 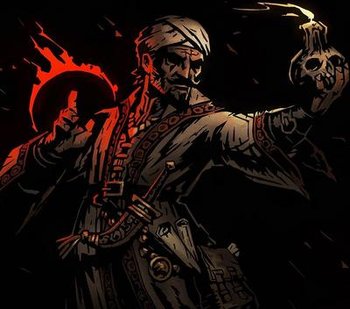 "How uncivilized."
"To fight the Abyss... one must know it."

A lifetime of scholarly inquest into ancient and forbidden lore has opened the Occultist's mind to the powers of the void. Debilitating curses and maddeningly impossible support skills are his specialty. The void, however, is an unpredictable power, and consequently skills' effectiveness can vary dramatically, and usually come at a cost of light or stress. 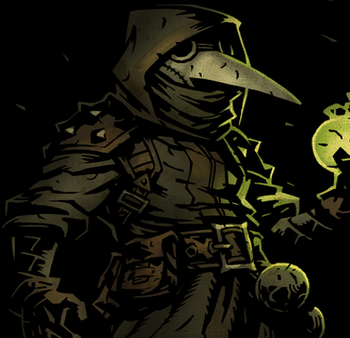 "Bones break and flesh tears!"
"What better laboratory than the blood-soaked battlefield?"

A doctor, researcher, and alchemist who prefers to hang back, eating away at her foes with stacking damage-over-time abilities like toxic clouds & plague-filled grenades. She is equally effective in a support role, blinding and confusing foes while enhancing a party's survival with damage-increasing tonics, and remedies for bleed and blight effects. 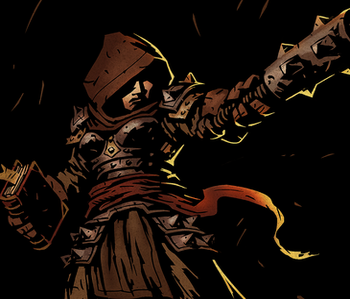 "Light take you!"
"A sister of battle... Pious and unrelenting."

The warrior nun channels her zeal for battle into healing abilities, holy judgements, and dazzling explosions of light. A strong backbone to any party, the Vestal can also hold her own on the front line with a powerful mace bash and close-quarters condemnations. 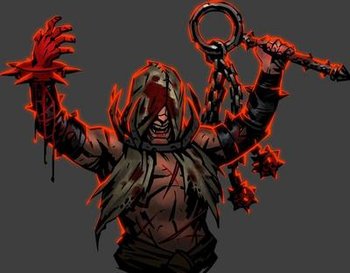 "Blood for the burden! Bones for the Light!"
"Awash in blood and delusion... He bears the burden of a thousand lifetimes."

A new class introduced in The Crimson Court DLC.

The Flagellant belongs to an extremist faction within the church, and is generally regarded with a toxic mixture of fear, awe, and disgust. The power he draws from martyrdom is as effective as it is unsettling — in one moment he is a fountain of healing renewal, and the next, a conduit of terrible wrath. His full potential is realized only the brink of madness… or death. 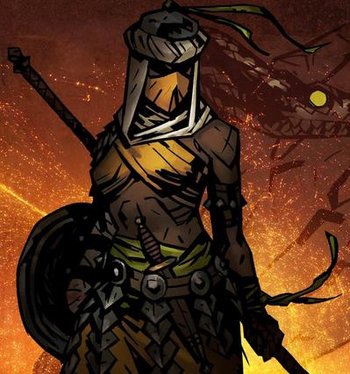 “Sever the weakened limb; the protected foe.”
"Shifting. Swaying. She mesmerizes her prey before the final strike!"

A sandstorm of grace and fury, the Shieldbreaker dances through the ranks delivering precision strikes of remarkable power. Sundering armor, breaking enemy formations, and leaving the taste of venom wherever she goes, the Shieldbreaker is a remorseless combatant. 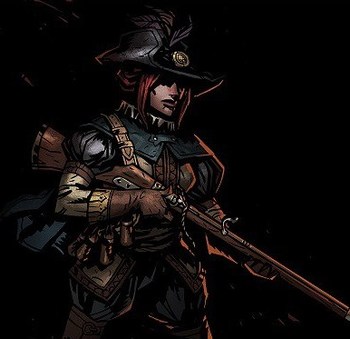 “The thrill of the hunt clears my mind!”
"A champion markswoman — keen for a new kind of challenge."

A reskin of the Arbalest. Originally a Kickstarter backer exclusive, then added as Free DLC two years later. 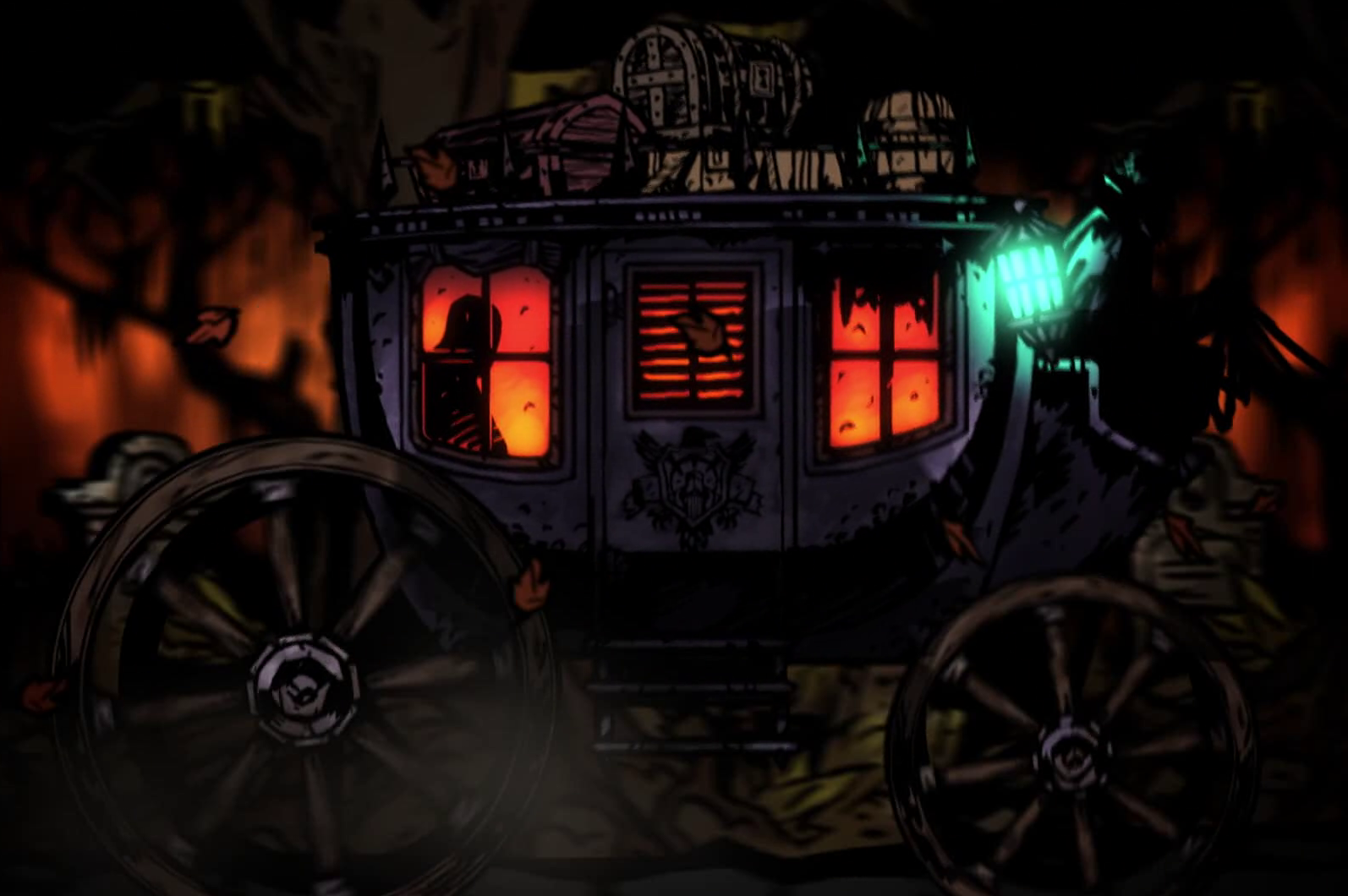 "I beg you, return home! Claim your birthright! And deliver our family from the ravenous, clutching shadows... of the Darkest Dungeon."
"You answered the letter.... now you are bound to this place."

As the last living member of a disgraced noble household, the Heir came to the hamlet at the request of the now-deceased Ancestor, who, after releasing a "crawling chaos" and other monstrosities onto their ancestral home, has begged the Heir to return and fix the damage the Ancestor brought forth. 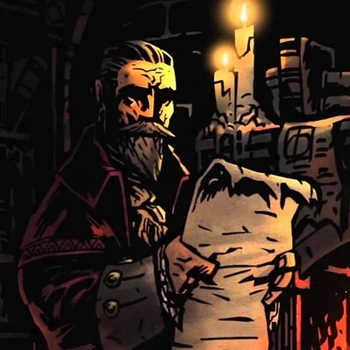 " At last, in the salt-soaked crags beneath the lowest foundations we unearthed that damnable portal and antediluvian evil..."
"In time, you will know the tragic extent of my failings..."

The relative of the player character who unearthed the portal and caused this whole mess to begin with. Having committed suicide some time before the game's events, he now serves as the game's narrator. Voiced by Wayne June. 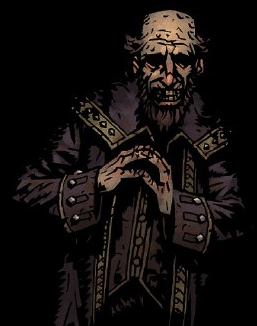 "Oh Light, burn my soul! Ha ha ha ha ha!"
"I fear his long-standing duties may have... affected him."

The old, weary, and completely insane groundskeeper of your family estate, now employed to you as part of your inheritance. He manages most of the day-to-day work so you don't have to, but he also uses his wages on the Tavern and Church, leaving you with one less stress-relief activity time slot for your heroes. To be fair, he definitely needs it. 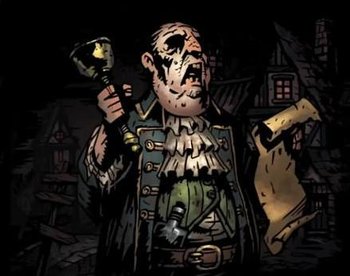 "Despondency and ambivalence seem to be on the wind."
"What little there is must suffice, for the time being..."

The Town Crier of the Hamlet who announces town events as they come up. Like the Caretaker, he might take up one of your Tavern or Church slots for the week. 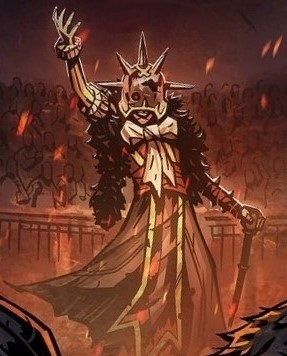 The mysterious woman in charge of the Butcher's Circus who provides the heroes with trinkets upon their win and acts as an announcer for the fights.
"We are NOT the Flame! We are but moths, and we are DOOMED!"