This page details the characters introduced in the Lost Crowns Trilogy Downloadable Content. Click here to get back to the main character index. Beware of unmarked spoilers.

Characters introduced in Crown of the Sunken King 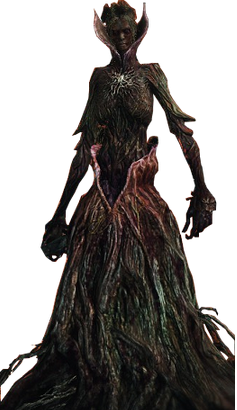 "You... Forever, you shall rot."
Voiced by: Clare Corbett

A Child of Dark who rests deep within the Dragon Sanctum alongside Sinh, the Slumbering Dragon. This woman is said to have been slowly amassing souls in the anticipation of the coming day of vengeance. In her bid for said vengeance, she has slowly been absorbing the soul of Sinh. 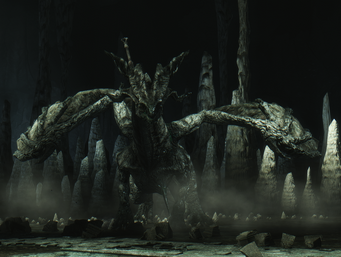 A dragon who resides in the deepest reaches of the Sunken City of Shulva, Sinh is said to have slept soundly under the magnificent kingdom built by Gryth, the Sunken King. However, Sir Yorgh, who sought the blood of the dragon, invaded Shulva and pierced the Slumbering Dragon with his personal spear. Unable to contain his store of poison, Sinh unleashed it all over the city, turning it into a death town. With Sir Yorgh disappearing into the Eternal Sanctum, the dragon returned to the deepest reaches of the kingdom, and continued to sleep, being watched over by the child of Dark, Elana the Squalid Queen.

A trio of warriors fought in the Cave of the Dead. They are, respectively, the Afflicted Graverobber (wears the Alva Set and dual wields katanas), Ancient Soldier Varg (exact replica of Havel the Rock), and Cerah the Old Explorer (Mirrah archer).

A brawler available for several fights in the Lost Crown Trilogy.

A dragon warrior available for the fight against Sinh, the Slumbering Dragon in the Crown of the Sunken King DLC.

A cleric available for the fight against Sinh, the Slumbering Dragon in the Crown of the Sunken King DLC. She reappears at the start of the Frigid Outskirts in Crown of the Ivory King.

An adventurer who can be summoned in the Cave of the Dead for the fight against the graverobbers. Wears the same clothes as Magerold of Lanafir.

A sorcerer available for summoning in the Cave of the Dead. Appears to be the former archmaster of Aldia's Keep given his Dragon Acolyte robes and Dragon Sage hood. In Scholar of the First Sin, he's available as a shade against The Pursuer.

A steel-clad warrior who invades on the bridge linking the Dragon Sanctum and the entrance to the Cave of the Dead.

Characters introduced in Crown of the Old Iron King 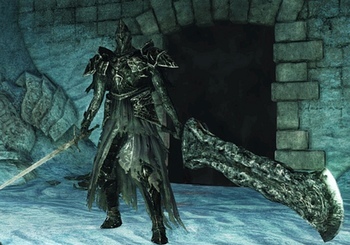 The former Sir Raime of Drangleic. After his disgraced resignation from Vendrick's forces, he journeyed to the Brume Tower to find greater strength. He did indeed find the greater strength he was looking for, but not from the regal father, but from a newfound mother who gave him true purpose.

A warrior from the far east who won the Old Iron King's favor, becoming his most trusted knight. After Alonne's departure, the Old Iron King named his samurai-like iron warriors the Alonne Knights in his honor. 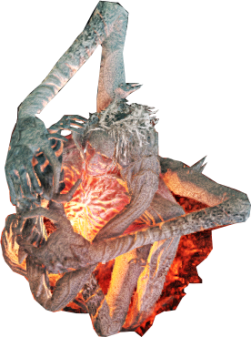 A Child of Dark who journeyed to the Iron Keep and Brume Tower in order to take the Old Iron King as her own. Upon reaching the kingless land, devoid of souls, she condemned herself to a fate most wretched. In despair, she forsook her own soul and spread her essence about the king's heirlooms. Her new form, a black ashen fog, encompassed the Brume Tower, animating decorative suits of armor to defend her newfound kingdom.

A warrior available for summoning in the Lost Crowns Trilogy DLC. Helps you fight the blue Smelter Demon and Sir Alonne.

Another warrior available for summoning in the Lost Crowns Trilogy DLC. Can fight the same bosses as Aidel.

A cowardly warrior who invades on a tower separate from Brume Tower. He wields a Chariot Lance, and the Rebel's Greatshield. He shows up again in the Frozen Eleum Loyce, this time as a human posing as a white phantom.

A heavily armored swordswoman who invades on another tower separate from Brume Tower. She wields a bastard sword and the Drangleic shield.

The Prowlers are a group of six warriors that manifest on the stairwell leading up to the Smelters Throne. They are all dressed in the Mad Warrior's set, and wield katanas and bows.

Characters introduced in Crown of the Ivory King 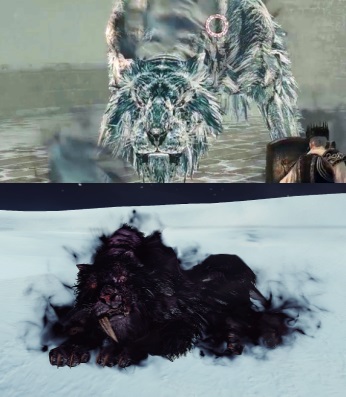 Each of the Ivory King's seven beasts was conferred a specific duty. Aava's was the guardianship of the King's beloved child of Dark, while Zallen and Lud were to mercy kill the exiles. Aava is found guarding the way to the Cathedral; Zallen and Lud are fought together in the Frigid Outskirts. 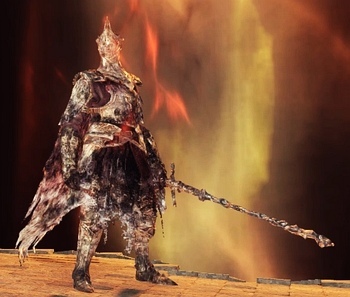 Far to the North, a King built a great cathedral to appease the raging flame. But when he sensed the degradation of his soul, he left without a word, leaving everything to Alsanna. The Ivory King was once the highest ranking knight in his home of Forossa, famed for its god of war. After taking his crown, they say he was the first to swing his sword in times of need, be it for his homeland or his people. 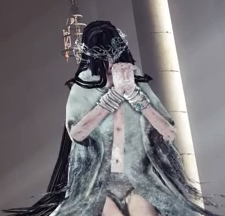 A Child of Dark who resides in the Grand Cathedral of Eleum Loyce. She is a frail being, born of a splinter of Dark, and an incarnation of her father's fears. She sought out the Ivory King and his land to anchor her existence, and to smother her fears. She now remains to forever be the heiress to the Ivory King's wishes, and watches over the Old Chaos.

Armed with a greatbow that is said to have brought down dragons eons ago, Twiggy Shei is a phantom who can accompany you down to the Old Chaos.

The Knights of Loyce were devoted guardians of the land of Forossa, and when the time came to seal the Old Chaos, they along with the Ivory King himself, delved valiantly into the depths of chaos, never to return. The few that survived remain in Eleum Loyce, now frozen over, awaiting the call of their master.

A warrior lying in wait for an ambush within the inner walls of Eleum Loyce, Aurhirem surprises his opponents through the subtle blending of the surroundings.

A sorceress of unknown origin, Donna guards the room leading to one of the Loyce Knights held captive in Eleum Loyce.

A cleric who invades you far below the bridge in Eleum Loyce.

All that remains of the Loyce Knights who journeyed into the Old Chaos with their king: mindless automatons of destruction.