This page details the Big Bad Ensemble of Dark Souls III, the Lords of Cinder. Head back through here for other character pages. Unmarked spoilers ahead. Ludleth is on the Main Characters page

open/close all folders
General
The Lords of Cinder are those who had the strength and power to link the first flame and perpetuate the Age of Fire. When the bell at the Firelink Shrine tolls, the Lords of Cinder reawaken from their graves, but all but one abandon their duty. It is the Ashen One's duty to return the Lords to their thrones to kindle the dying flame, whether they want to or not.
Advertisement:
Abyss Watchers 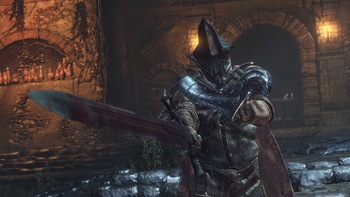 Farron's Undead Legionnote  and they're not the only one in there.
"These undead warriors vowed to partake of wolf blood. They acted in the dark, seeking out any sign of the Abyss, fighting a constant war with its abominations."

The Abyss Watchers were the premier unit of Farron's Undead legion, dedicated to stopping the Abyss wherever it may appear. All of them had burned together for their Age of Fire to continue. As a result, the energy of the Lord of Cinder had been spread to the point it can't be used. They are the very first members of the Big Bad Ensemble to be fought on the Unkindled One's path to Linking the Fire.

Aldrich, Devourer of Gods/Saint of the Deep 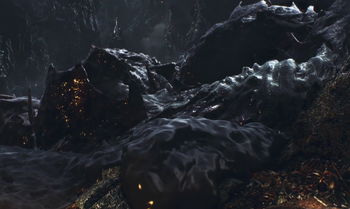 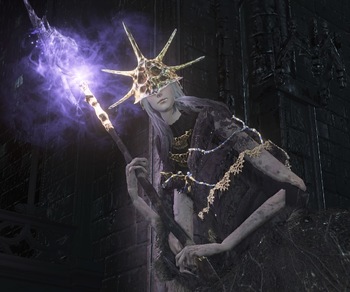 "When Aldrich ruminated on the fading of the fire, it inspired visions of a coming age of the deep sea. He knew the path would be arduous, but he had no fear. He would devour the gods himself."

A sinister being who became a Lord of Cinder by devouring humans and was transformed into a dark, oozing monstrosity. Sometime after he was imprisoned by the Cathedral of the Deep, they eventually became corrupted and started worshiping him, even continuing to feed him Hollows and the occasional god. He is either the second or third member of the Big Bad Ensemble to be fought by the Player Character, depending on whether or not Yhorm was defeated first. 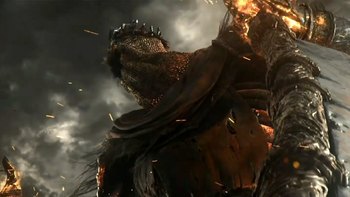 The Reclusive Lord of the Profaned Capital

Yhorm is a towering, powerful warrior who wields a huge two-handed cleaver in combat. The descendant of an ancient conqueror, Yhorm became a Lord of Cinder through his prowess on the battlefield. He is either the second or third member of the Big Bad Ensemble to be fought by the Player Character, depending on whether Aldrich was defeated before or after him. 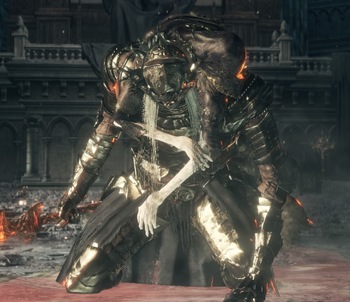 The brothers who would Link the Fire note Lothric is draped across Lorian's back
''"Mind you, the mantle of Lord interests me none. The fire-linking curse...the legacy of lords...let it all fade into nothing."'
Voiced by: Harry Lister Smith (Lothric)

A pair of royal brothers who share their curse, but now choose to forsake their duty and watch as the First Flame fades into nothingness. Lorian fights alone at first, and Lothric comes to assist him later. They are the final members of the Big Bad Ensemble to be fought on the Unkindled One's path to Linking the Fire.

Soul of Cinder / Incarnation of Kings / The Red Knight