This page details the leaders and members of the 9 different covenants the player can access to throughout the game. Head back through here for other character pages. Note: contains unmarked spoilers

open/close all folders
The Way of White

A covenant that regroups the followers of the Great Lord Gwyn, seeking to kindle bonfires in order to sustain the power of the gods. The very first covenant available to beginning players, and one that makes multiplayer matchmaking easier among members of the Way of White. 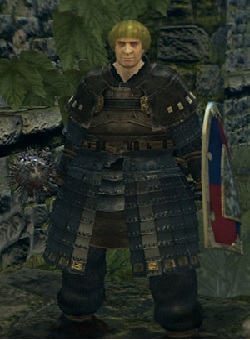 "Have you business with us? If not, I'd prefer to keep a distance, if possible."

A cleric from Thorolund, accompanying the Princess Reah on an Undead mission through Lordran. Allows the player to join the Way of White Covenant, and sells a few basic miracles. 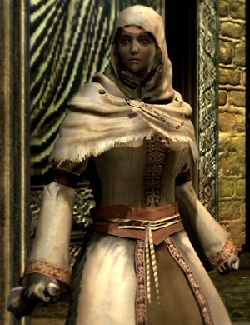 "We must not let this curse overcome us."

The Princess of Thorolund, an inexperienced cleric on an Undead mission through Lordran to learn the Rite of Kindling. Allows the player to join the Way of White Covenant if they didn't take Petrus's offer; she also shares some of the spells sold by Petrus, thankfully at a cheaper price. She and her two bodyguards only spawn in Firelink Shrine once you defeat the Capra Demon, after which they, along with Petrus, will shortly depart for the Catacombs.

The two bodyguards and former classmates of Reah of Thorolund. They, along with their princess and Petrus, are tasked with the mission of finding the Rite of Kindling in order to accomplish their covenant's main objective. 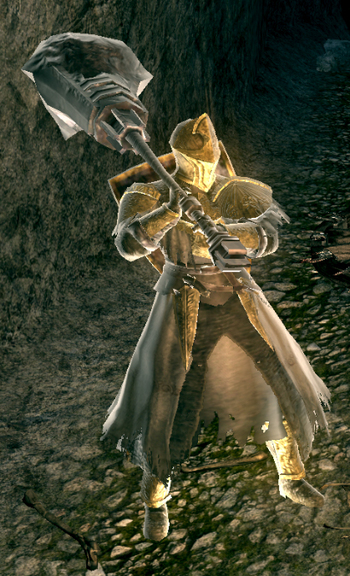 A paladin knight available for summoning against the Pinwheel boss in the Catacombs, but then invades you as you approach Gravelord Nito.

A covenant comprising of the dedicated followers of the firstborn of the Great Lord Gwyn. They harness the power of sunlight, manifested as lightning powers. Similar to the Way of White, it is a covenant specialized in co-op multiplayer, altering the member's summon phantom colour to yellow and granting everyone a Sunlight Medal after defeating a boss, which they can use to progress further in the covenant's ranking.

A simple altar made in front of a broken statue for worshiping the sun and Gwyn's firstborn child, a god of war whose foolishness led to him being stripped of his deific status and his name stricken from the annals of history. Kneeling at this altar will allow the player to join the Warrior of Sunlight Covenant if your Faith stat is 50 (unpatched game) or 25 (patched game), although this requirement is lowered by 5 each time you are summoned by another player and successfully help defeat a boss. 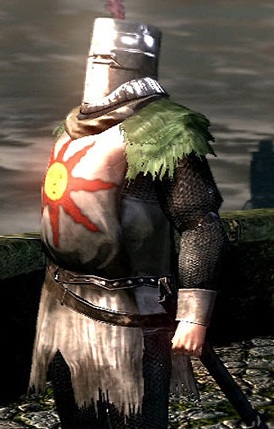 "Use this to summon one another as spirits, cross the gaps between the worlds, and engage in jolly co-operation!"

A knight from Astora who journeyed to Lordran on a personal quest to find his own inner Sun.

A covenant made up of warriors who stop at nothing to prevent intruders from desecrating Artorias' resting place in the Darkroot Forest. One of the earliest accessible PvP covenants.

Alvina of the Darkroot Wood 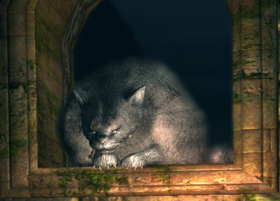 "I command a clan of hunters who track down defilers of the forest graves. What dost thou say? Wilt thou not join us?"

A large, grey-white, talking cat that resides in the Darkroot Woods. Allows the player to join the Forest Hunter Covenant. She is friends with the late Sir Artorias and his companion the Great Grey Wolf Sif, and considers the legend of Artotias's covenant with the Abyss naught but a fairy tale. She orders her Hunters to protect the forest and guard Artorias's gravesite.

Shiva of the East 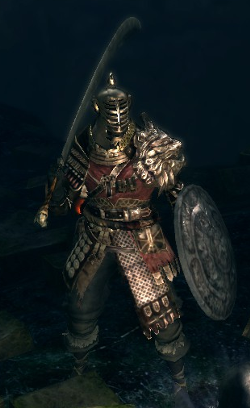 "Fight and hunt as you like. Whoever's fastest gets the prey. That's the way we do it."

A mysterious merchant from an unnamed country from the Far East, which is modeled on real-life Asia. Sells you his wares if you're a member of the Forest Hunter covenant. He has a ninja bodyguard.

A covenant dedicated to Quelaag's sister, a crippled woman with an equally crippled demonic spider for a lower body. Joining this covenant doesn't give you any PVP benefits, but instead some pyromancy spells and a shortcut to Lost Izalith. 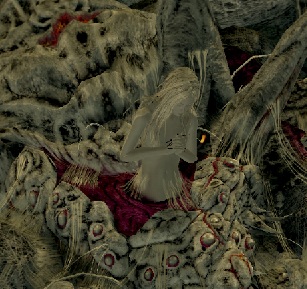 One of the seven Daughters of Chaos and sister of Quelaag the Chaos Witch and Quelana of Izalith. Found in a hidden room off of her sister's boss arena, alongside her servant Eingyi. Allows the player to join the Chaos Servant Covenant. 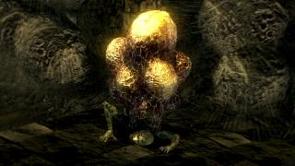 "There is no time for idle chat. Think only of Our Fair Lady, and what she may need."

An egg-burdened pyromancer who serves the Daughter of Chaos. He was originally a resident of the Great Swamp, but was cast out as a heretic for inventing the Poison and Toxic Cloud pyromancies, but became dedicated to Quelaag's sister when she showed him her kindness. He is deeply distrustful of the player (unless the player is either egg-burdened themselves or is equipped with the Old Witch's Ring), but will tolerate them if they seek to ease the pain of his mistress.

The guardians of Gwynevere, Princess of Sunlight. They have recieved blessings from the princess herself, so that they may aid each other. This covenant is mostly for co-op purposes, with an additional focus on support Miracles (contrast the Warriors of Sunlight). Joining this covenant will allow the player to use two unique defensive miracles. The player will also receive a ring that boosts miracle synergy. 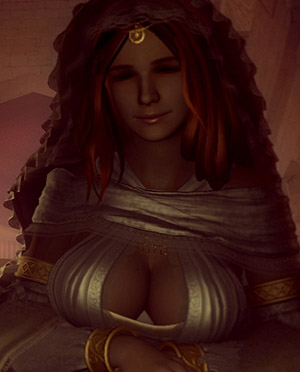 "Since the day Father his form did obscureth, I have await'd thee."

Daughter of Gwyn, Queen of Sunlight, Princess of Anor Londo, and Keeper of the Lord Vessel. Allows the player to join the Princess's Guard Covenant.

Blades of the Darkmoon

A covenant that dedicates itself to hunting sinners throughout Lordran. Their base of operation lies in Anor Londo, where their leader Gwyndolin resides as well. Progressing in this covenant requires you to offer Souvenirs of Reprisal, which are mostly obtained from killing sinners. 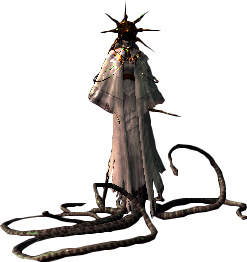 "If thou art a true disciple of the Dark Sun, cast aside thine ire, hear the voice of mineself, Gwyndolin, and kneel before me."

The lastborn son of Gwyn and guardian of Anor Londo. Born a Moon Sorcerer, he was raised like a daughter and has a feminine appearance as a result. Allows the player to join the Blade of the Darkmoon Covenant.

Darkmoon Knightess/Lady of the Darkling 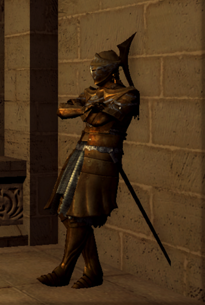 "Welcome to the lost city of Anor Londo, Chosen Undead."

Servant of Gwyndolin, a member of the Blade of the Darkmoon, and the Fire Keeper for the first bonfire found in Anor Londo.

A covenant comprising of the dreaded knights who were sealed in the New Londo Ruins, led by Darkstalker Kaathe. The premier covenant for invading other players. Progressing in this covenant requires liquid humanity, which can be obtained through various means, although this covenant makes it easier to obtain some through invading.

The leader of the Darkwraith covenant, who resides in the void of the Abyss. For more information on this character, see Dark Souls: Main Characters and Lords.

A group of rogue Undeads who worship the Gravelord himself, and spread misery throughout other worlds. One of the more elusive covenants, and one dedicated to increasing the difficulty of enemy NPCs for players around the same level. Progressing in this covenant requires obtaining Eyes of Death from invaders who try to kill the Plague Master or from the Basilisks. This quick video helpfully showcases all the perks (and annoyances) of Gravelords.

The leader of the Gravelord Servant covenant, only accessed through unconventional means. For more information on this character, see Dark Souls: Main Characters and Lords.

Path of the Dragon

A covenant found in the deepest parts of the Ash Lake, where a descendant of the Everlasting Dragons lives. Usually dedicated for honorable duels, with the reward for such a duel being the elusive dragon scales, which are necessary for progressing in the covenant or upgrading dragon-type weapons.

One of the few remaining descendants of the ancient stone dragons, a whelp stuck in the Ash Lake. Allows the player to join the Path of the Dragon Covenant.