A list of notable characters from the Dark Forces Saga. For tropes pertaining to Mara Jade, protagonist of Mysteries of the Sith, see here. 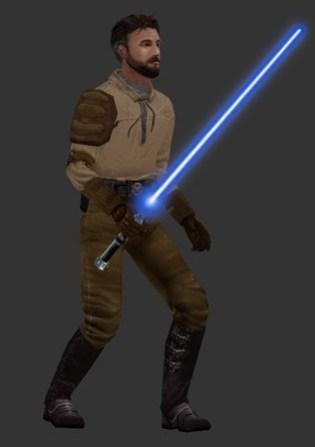 The main character of the saga. Kyle started as an Imperial soldier before finding out that the Empire was behind the death of his father, after which he defected and became a mercenary serving the Rebellion and later the New Republic against the Empire, especially when it came to tasks of infiltration and sabotage, as his inside knowledge of the layout of Imperial ships and bases gave him an advantage. In the second title, Kyle became a Jedi and was charged with the task of defending the legendary Valley of the Jedi on Rusaan. He appears as a NPC during the events of Jedi Academy. 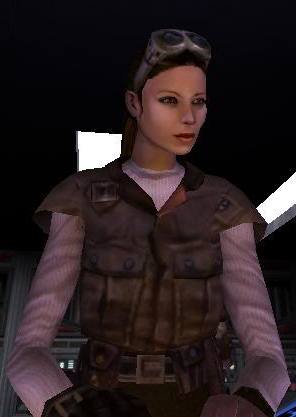 A space pilot and partner of Kyle Katarn. She helped him in many situations. She's the only other person who knows the location of the Valley of The Jedi. 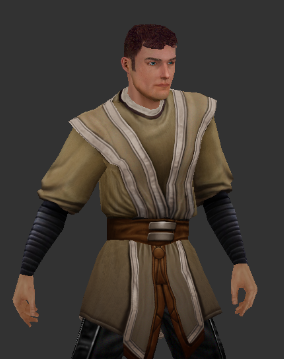 Kyle's student and the main character of Jedi Academy, Jaden is a youth full of talent from Coruscant who managed to build a lightsaber by himself. He's sent to Luke's Jedi Academy on Yavin in order to learn the ways of the Force. Players can choose different races and genders for Jaden, but canonically, he's a male human with a purple (later green) standard lightsaber. Jaden has since stared in two EU novels, Crosscurrent and Riptide, set nearly 30 years after the game. 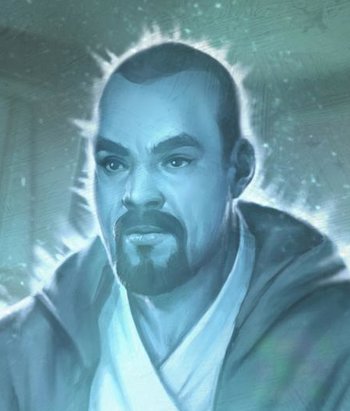 A Jedi knight killed by Jerec. His spirit guides Kyle during his journey to the Valley of the Jedi. 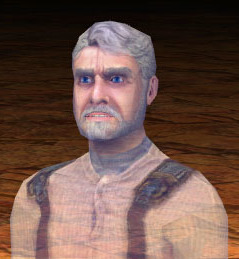 Kyle's father, an old man sensitive to the Force and a leader of the Rebellion. He was slain by Jerec about one year before the events of A New Hope. His ghost later appears to both Luke and Kyle. He knew the location of the Valley of the Jedi and made a map built inside the stone roof of his lab.

An Imperial officer and Kyle's roommate during their days at the Imperial Academy. He only appeared in the Soldier for the Empire novel. 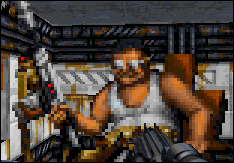 The paranoid imperial scientist working on the Dark Trooper project, in order to create invincible warriors for the Empire. 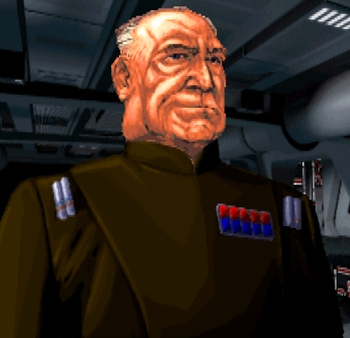 Voiced by: Jack Angel (Dark Forces), Tim Russell (Dark Forces: Soldier for the Empire audio adaptation)
It has been a long time since I've challenged a man to battle. I'm glad my opponent is so worthy.

The Big Bad of the first game and the man behind the Dark Trooper project. He fights Kyle on his ship using the Phase III Dark Trooper armor. 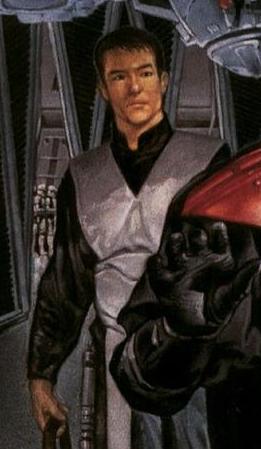 Portrayed by: Rafer Weigel
Yun, a young and willing Dark Jedi; the newest addition to the cause. Brash and eager, he is ready to prove himself to his dark master at any cost. These elements make him a dangerous and unpredictable foe.
—Rahn

The youngest member of the Dark Jedi, an Epicanthix with a yellow lightsaber. Is fought by Kyle in Jerec's Palace at Barons Hed, but is spared. If you choose the light side path he makes a Heel–Face Turn, performs a Heroic Sacrifice and gives his lightsaber to Kyle. 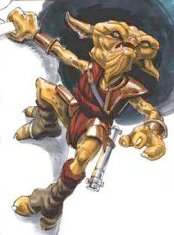 Voiced by: Denny Delk
It is a mystery why one would call Gorc and Pic twins. Even though one is a miniature version of the other, they look nothing alike...they also don't battle alike. Pic is the energy and Gorc the counter. They are the clashing balance of opposites, one the voice, the other the body. This combination is deadly.
—Rahn

A modified Kowakian monkey-lizard who became sensitive to the Force. He's a tiny Jedi warrior who's always seen with Gorc. He and his "brother" attack Kyle on the Suulon's Star when he tries to recover 8t88's head. Wields an orange lightsaber. 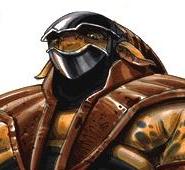 A modified Gamorrean who became sensitive to the Force. He's a huge warrior who fights with Pic. Wields a gargantuan orange lightsaber. 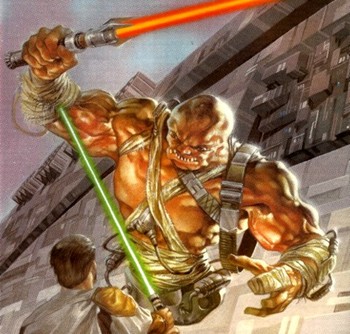 Portrayed by: Morgan Hunter
To the one called Maw; a bitter individual, who loathes all and holds loyalty to few. A strong and formidable foe, for every cord of muscle there is hatred. It is this hate that keeps his aging body strong.
—Rahn

One of the vilest Dark Jedi, was cut in half by Rahn but managed to survive. He uses the Dark Force to float in the air and fights with a blood red lightsaber. He fights Kyle on Russaan and gets killed, almost pushing Kyle towards the Dark Side.

Portrayed by: Valerie Wildman
Out of all the Dark Jedi I have met Sariss is the one I can say I fear. Powerful, strong in both the physical and mental arenas of the Force, she is a master, a perfectionist, quiet and reserved. This makes her a very dangerous foe.
—Rahn

Jerec's right hand woman, a cold temptress who serves her master with uncanny devotion. Has a blue lightsaber. She sides with Kyle in the Dark Side ending. 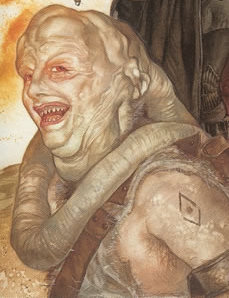 Portrayed by: Time Winters
I can't abide this creature named Boc! He is one of the few that actually uses two lightsabers in battle. He is a crude individual that lacks both tact, and teeth. Only a Dark Jedi can he be.
—Rahn

A perverse Twi'lek Jedi serving Jerec. An insane warrior who fights with a large purple lightsaber (actually two held together). He's killed by Kyle in the Valley of the Jedi. 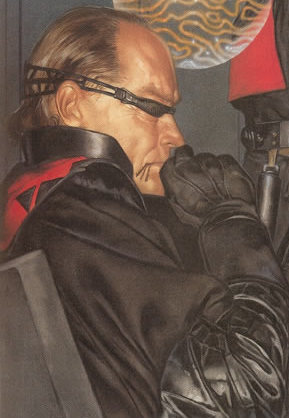 Portrayed by: Christopher Neame
His heavy brow overshadows the empty recesses that normally embrace eyes. Jerec has the uncanny power to absorb and overshadow one's connection to the Force...like a dark cloud. A deep, empowering grasp of your will is what you need.
—Rahn

The leader of the Dark Jedi is a Miraluka Jedi with great power and ambition. He seeks for the location of the Valley of the Jedi in order to absorb its power and become an almighty being capable of eradicating star systems with a whisper.

Jerec also had a cameo in Galaxy of Fear: Spore, where he attempted to use some canned evil. 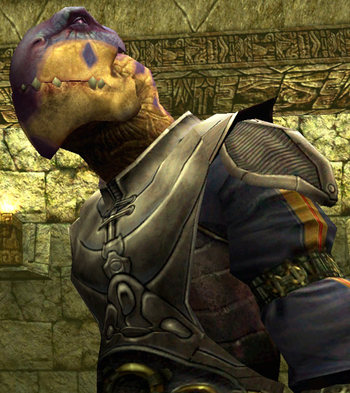 Former Jedi under Luke, is a powerful Chistori who turned to the Dark Side. He despises the weak, and plans to eradicate the Jedi once and for all. 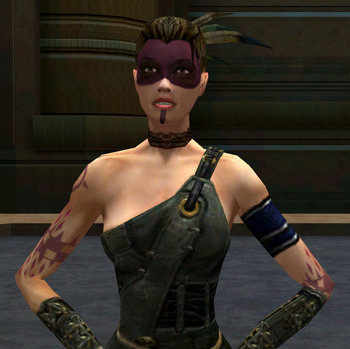 A Dark Jedi serving Desann as his right hand woman. She's defeated by Kyle on Bespin and forced to escape. She reappears in Academy as the new Big Bad. 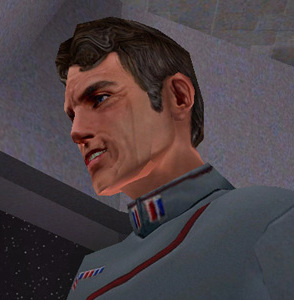 Officer of the Remnants and ally of Desann. He's an evil genius working for the Dark Jedi. He sends his men mining for Force Crystals and Cortosis (a metal resistant to lightsabers). He eventually faces Kyle on his spaceship, the Doomgiver, but is bested. 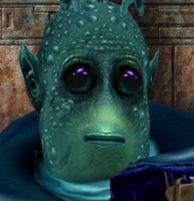 A Rodian gangster from Nar Shaddaa. He supplied Desann with thugs, who took over Bespin, for money. 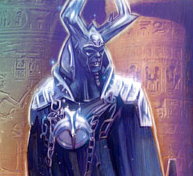 An ancient and now mummified Sith Lord worshipped in the present day by the Disciples of Ragnos. 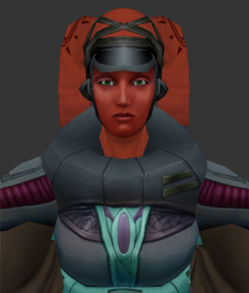 A red-skinned Twi'lek Sith serving Tavion as her new apprentice.

Two high ranking members of the Disciples of Ragnos. 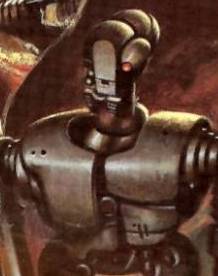 A droid appearing in Jedi Knight as a ruthless dealer of information and knowledge. He's hired by Kyle Katarn to learn the truth about his father and is later hired by Jerec in order to find out the location for the Valley of the Jedi. He gets decapitated by Pic and Gorc when he asks for his reward. 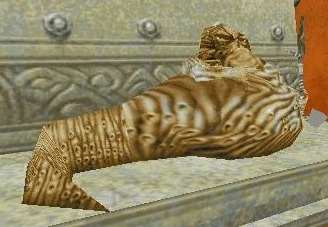 A Hutt crimelord who decided to cooperate with the New Republic in order to avoid trouble. He helps Mara Jade in her quest in Mysteries of the Sith after she helps him against his rival Takara. 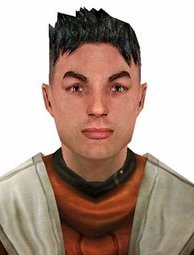 One of the students of the Jedi Academy and rookie member who trains with Jaden. Later, he falls to the Dark Side and can be redeemed (Light Side) or killed (Dark Side).

A Remnant warden on Dosuun that has captured Jaden. Has a hobby of offering prisoners a chance to escape as he hunts them down.

Duno Dree
Voiced By: Michael Paul Levine
A Rebel Alliance pilot for Qu Rahn.
Bordo
A Tusken Raider who left Tatooine to be a mercenary, working in a swoop gang hired by Maw and Jerec.

Characters from the tie-in novellas and audio dramas

Griff Grawley
Voiced By: Jay Honenbacher
A refugee from Sulon, who was relocated to Ruusan by Morgan Kataran after the attack of the Empire, which killed his daughter. Grawley survives Jerec’s arrival on Ruusan and helps guide Kyle in his conflicts against the Dark Jed.
Lasko
Voiced By: Louise Eneyart
A Ruusan settler whose first wife died in the subjugation of Sulon. He has a new wife and baby daughter on Ruusan. When the Dark Jedi arrive he urges the settlers to fight them.
Sergeant-Major Hong
Voiced by: James Cada
A stormtrooper Sergeant assigned to accompany Kyle on his first field mission (and only one prior to his defection).
A-Cee
Voiced By: Tim Russell
The protocol droid of rebel journalist Candice Onidi, who was present at Sulon.
Rosco Ross
Voiced By: Christopher Bloch
A Rebel who helps Jan Ors recruit Kyle.
Jessica
A Rebel pilot who briefly ferries Jan.
Nathan Donar III
Voiced By: Patrick Coyle
A classmate of Kyle, and the youngest son of an Imperial Governor.
Nij Por Ral
Voiced By: Peter Moore
An academic Qu Rahn is recruiting to the Rebel Alliance when Jerec finds him.
Grentho
Voiced By: Tim Glovatosky
One of 8t88’s bodyguards, a muscular human.
Portia
A teenaged Ruusan settler who helps Jan combat a scout trooper.
Grendel
8t88’s menacing, carnivorous pet.
Captain Jerg
Voiced by: Tom Keith
A smuggler captain, and founder of the settlement Fort Nowhere on Ruusan, as well as an associate of the Rebellion.
Marie Peeno
Voiced By: Louise Eneyart
Jerg’s second in command, who runs Fort Nowhere while he’s gone.
Slyder
Voiced By: Peter Moore
A Rodian bounty hunter and information broker operating onboard the massive cruise liner, the Star of the Empire. Slyder makes a living out of identifying people who appear to hold value, then, if they don't have bounties on them, finding an enemy who will pay him to kill or capture them. He observes Kyle being recruited into the Rebellion by Jan this way and tips off the Imperials onboard.
Dinko
Voiced by: Dwight Yoakam
A smuggler at Fort Nowhere who mans one of the turret guns.
Brazack
An Imperial special forces lieutenant who commands the forces fighting Morgan Kataran.
Vester
A shuttle pilot who takes part in the attack on Sulon.
Major Noda
An officer taking part in the attack on Sulon.
Rol
One of 8t88’s henchmen.
Porg
One of 8t88’s henchmen, a Trandoshan bounty hunter.
Rolanda Gron
Voiced By: Tom Keith
One of Qu Rahn's team, a Klatoonian technologist.
Major Vig
Voiced By: Gary Groomes
An Imperial officer helping oversee the excavation of the Valley of the Jedi.
Purdy M. Trico
Voiced By: John Wehrmann.
An Imperial warlord official.
Patrol 341
Voiced By: Christopher Bloch (Lieutenant Aagon),

Floater
A Bouncer who assists Kyle.
2nd Lieutenant Momo
A scout transport pilot who briefly takes Yun around.
Alfonso Luiz Obota
Voiced By: Emil Herrera.
A Rebel transport officer.
Jaru
A stormtrooper under Major Vig known for his ability to spit a long distance. Yun rescues him for a collapsing cavern.
Candice Ondi
Wonder of the droid A-Cee and a Sulon Rebel.
Skorg Jameson
Commander of the Sulon guirella forces, with ambitions for being promoted to a higher role in the rebellin.
Morley
One of Kyle's stormtroopers on his only mission for the Empire.
Mayor Byron Devo III
Voiced By: Jack Walsh
The mayor of Fort Nowhere.
Carole Grawley
Voiced By: Sue Scott
Griffs wife.
Horley
A sentry at Fort Nowhere.
Luther Pardy
Voiced By: Jack Walsh
A husky Fort Nowhere denizen who survives the Imperial attack.