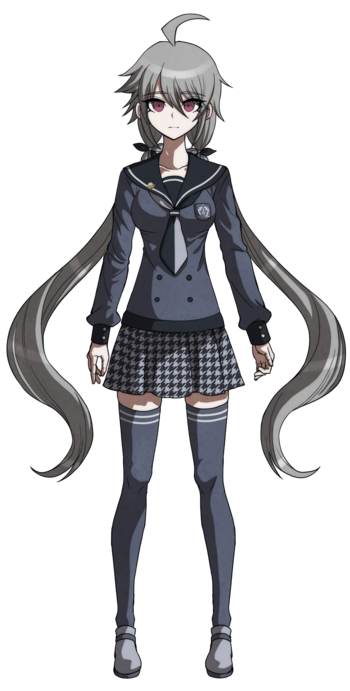 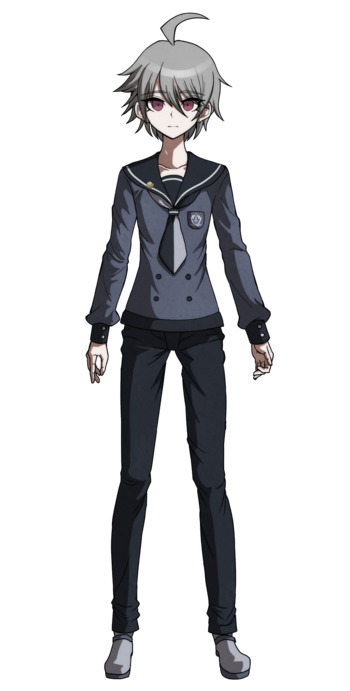 The protagonist of the story. A shy girl whose talent has caused her to become withdrawn from the world around her. She has the ability to detect the feelings of others.

It's revealed early on that Ayumu is actually a boy who was forced to dress up as a girl by his abusive sister. He ends up surviving the killing game. 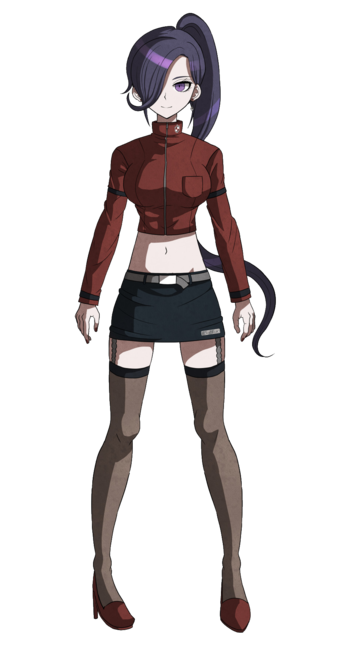 She claims to be able to tame any animals, including humans. Although she was born in Japan, she joined a French circus early on in her life to build up her skills as an animal trainer. She tends to make alot of sexual comments.

In the unofficial dub, she ends up as the main victim of the third murder case as she's stabbed in the stomach and bleeds to death while trapped in an exhibit case. 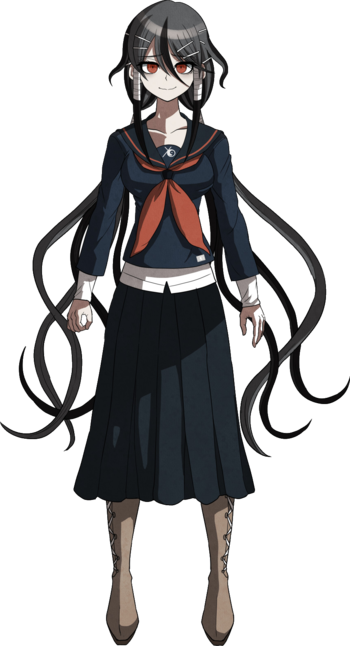 A dangerous person with real spiritual powers. She can perform all sorts of hexes and curses. She considers spirit possession disgusting, but will perform it on rare occasions. However, her powers are quite weak and usually drain her energy for several days.

She is one of the 5 survivors of the killing game in the English Dub. The epilogue shows her visiting Misuzu's temple and deciding to work there. 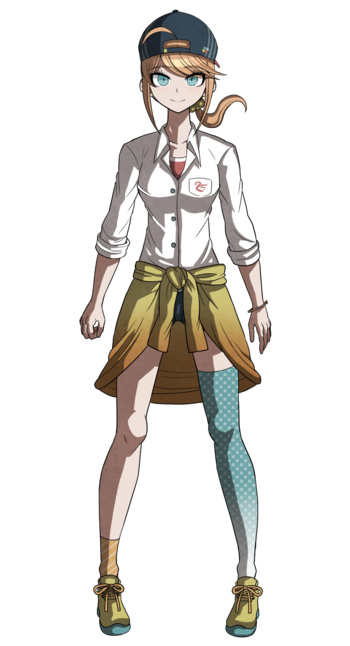 A dancer who was recognized after performing internationally with the granddaughter of a certain Ultimate Musician. She's optimistic, and only sees the best in everyone. However, she has a weak mentality that can easily break.

She dies in both versions of the story. In Miwashiba's version, she's the first killer who went after Saiji while in the English dub she was the first victim who died by drowning courtesy of Nico. 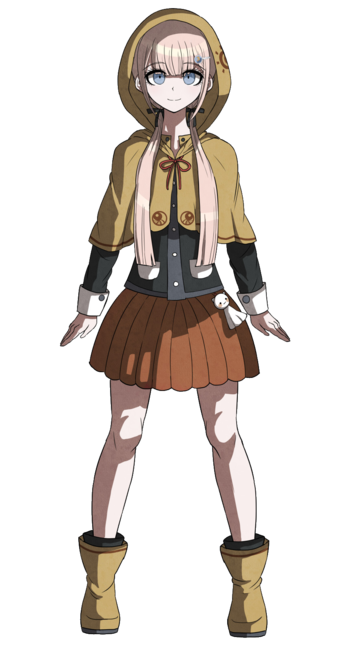 The weather forecaster of a major news show. Her bubbly nature and odd style of speech have made her popular across the country. Her weather predictions are always correct. She is narcoleptic and has even fallen asleep on live TV.

In the English Dub, she unintentionally becomes Seishi's killer after giving him mouth to mouth in a failed attempt to save him which ultimately suffocated the boy. 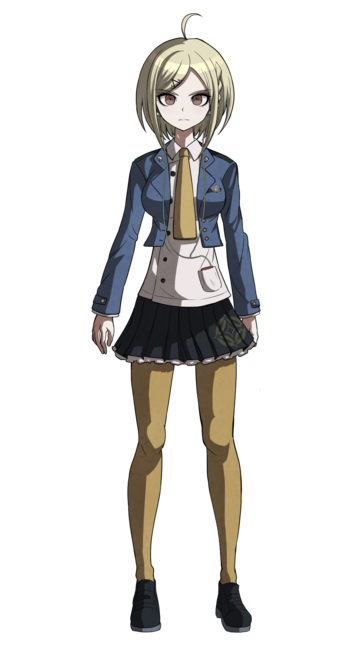 A woman who refuses to reveal her talent. She appears not to care for the other students trapped in the killing game and acts rude to them. She gets agitated easily and never goes anywhere without her music player.

In Miwashiba's version, She is actually the Ultimate Secret Agent who was assigned to infiltrate the killing game and capture Zen Katagiri, the Ultimate Hitman, before he completed his crime.

In the English dub, her new talent is the Ultimate Bodyguard. And while she winds up as Mitsunari's killer in the 5th chapter, she gives the group an advantage by taking Monodora with her to be killed aswell. 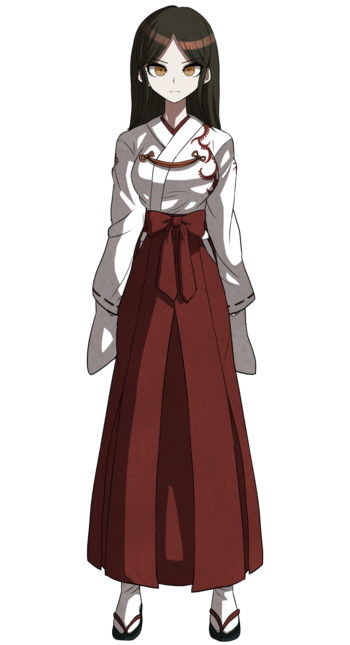 A young woman who is known throughout Japan for her incredible dedication to her local shrine. She is stern and strict towards others, but will take the time to cheer up anyone who needs it. It is said that she has the ability to communicate with the spirits.

For the English Dub, she ends up becoming the second victim as she was slowly killed by poison thanks to Seishi. 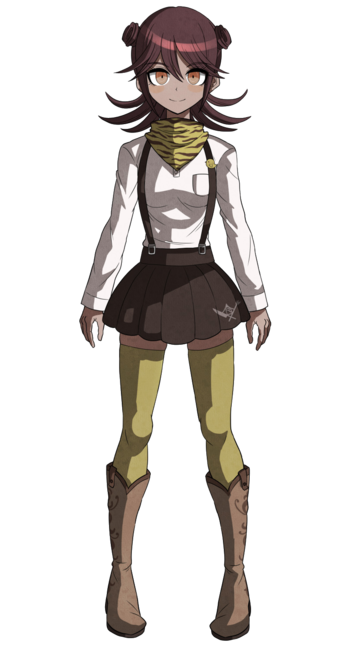 She is quite childish and stupid, but has excellent critique skills, to the point that she may start critiquing things other than food. She has intense mood swings, and can jump from one emotion to its polar opposite in a moment's notice.

For the English Dub, she's to be the true director/mastermind of the killing game. While she doesn't face execution, she's sentenced to several years in prison for forcing her classmates to kill each other. 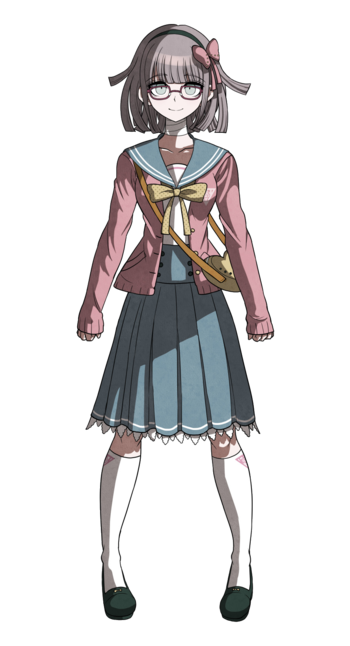 A depressing girl who became famous after one of her poems was stolen and shared online. She tends to mix poetic expressions into her speech and constantly puts herself down. She considers her bandages a fashion statement against the world that hurt her.

In the English dub, she is the first killer who went after Maiko. 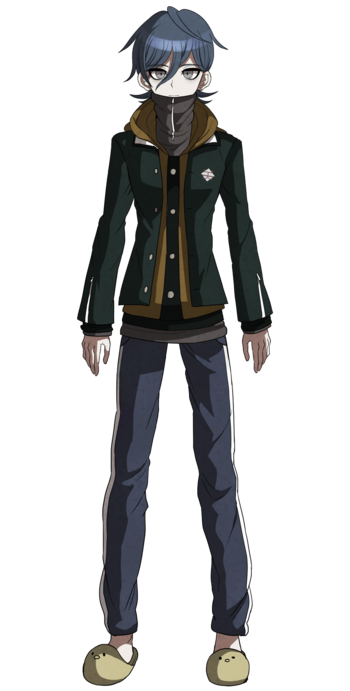 He posts in particular intervals in order to amass the biggest follower count on a website, then gets bored and moves on to the next. He doesn't like talking to people who have nothing to prove, and will only tolerate those he considers talented like him.

In Miwashiba's version, he is the mastermind behind the killing game. Disgusted with how people were willing to give up their talents just to be normal, Akira was inspired by Junko Enoshima to recreate the killing games in order to revolutionize the world just like she did with her despair talent.

In the unofficial dub, he is now a co-mastermind along with Narumi. However he ends up being executed in the second trial after he's revealed to have murdered Kego, whom he has a grudge against. 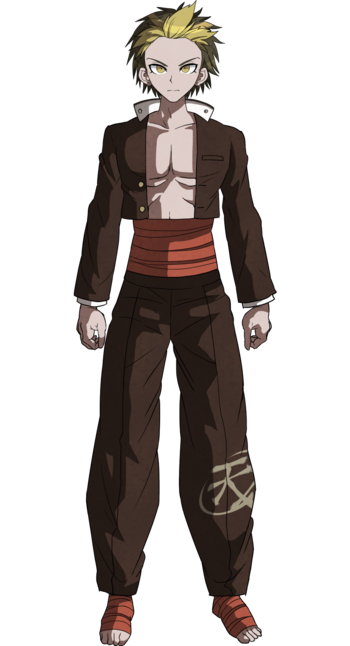 A karate fighter that follows a creed of being "pure, correct, and beautiful". However, he will get angry if you call him feminine. He swears alot and always threatens violence. However, in fights, he never kills his opponents.

For the dub, he escapes the killing game and now cares after a cute dog that belonged to the late Aruma. It's also implied that he now has an effeminate appearance. 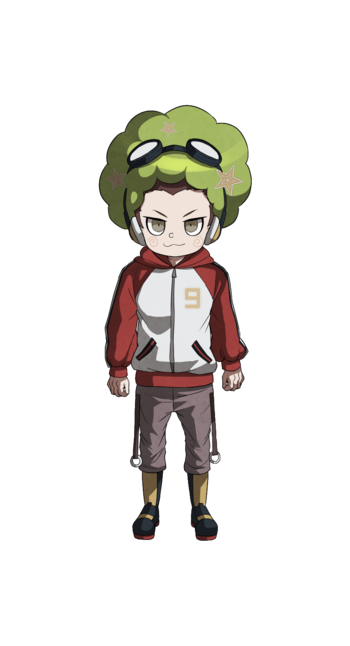 An underground DJ whose performances can completely change a person for life. He is dedicated to being "hot" and is always on the lookout to get lucky. Despite this, he appears to be suspicious of everyone around him.

In the unofficial English Dub, Kego becomes the 2nd victim as his head is bashed from behind followed by him being left in a pool of freezing water. However, it turns out that he was actually alive and joins the killing game later on in the story. He survives past the 6th chapter but now has suicidal tendencies.

Voiced by: Sword of Swords 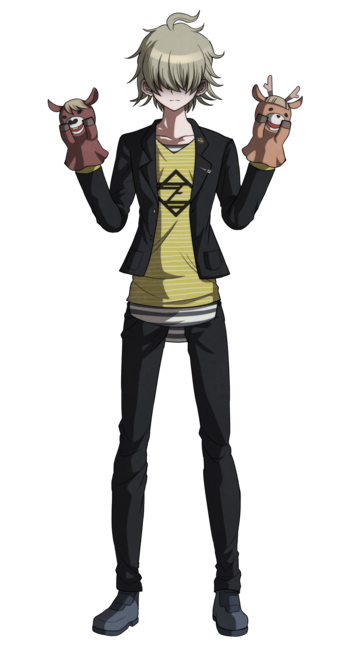 A man that rose to fame after starring in an educational television show. He has two puppets, Uma the horse and Shika the deer, his children. He regularly uses his puppets to communicate with himself and the others, which strangers may find weird.

In the English dub, he and his children become the victim(s) of the 5th Chapter. 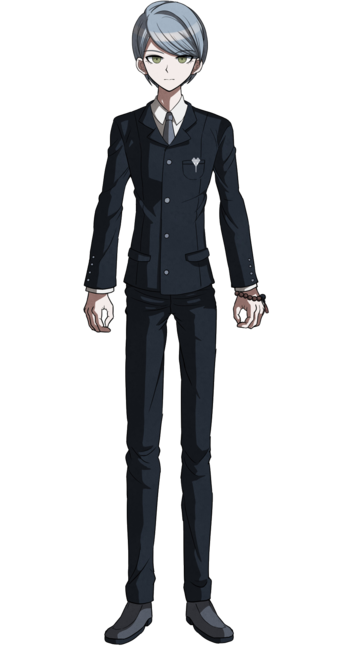 He has trouble socializing, but otherwise is nothing more than a typical teenager. He is calm and quiet, and is polite towards everyone he speaks to. It's rumored that a soul will always enter the afterlife if you hire his services.

In Miwashiba's version, he is the first victim where he was strangled by Maiko and thrown into an open locker.

In the English dub, he becomes the third killer after he's manipulated into killing Aruma thanks to Seishi. 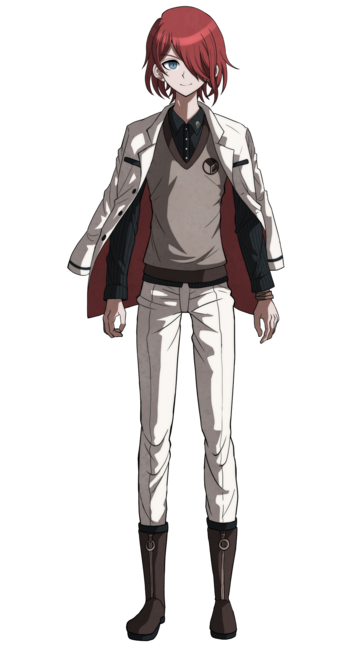 A mature and kind man who has been in the public eye for quite sometime. He has a large following of fans due to his looks. He acts like a stereotypical gentleman and is courteous towards those who offer him the same respect.

In the original version, it's all a front. His real name is Zen Katagiri who is actually the Ultimate Hitman. He joined the killing game because he was hired by the government to assassinate Ayumu in order to end his destructive bad luck.

For the dub, he still maintains his true talent and proves to be a dangerous threat to the group. After receiving several attacks from different students in the fourth chapter, he meets his end after Marin tries (and fails) to save him. 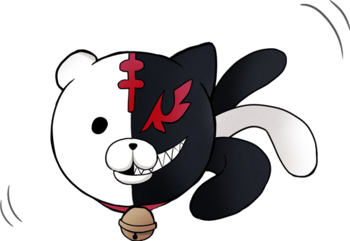 A half-black, half-white tiger robot that seems to be the headmaster of Precept's Peak Academy and claims to be the mastermind of the killing game. Because it is an AI, it functions completely on it's own.

For the dub, he ends up being executed alongside Mikoto. 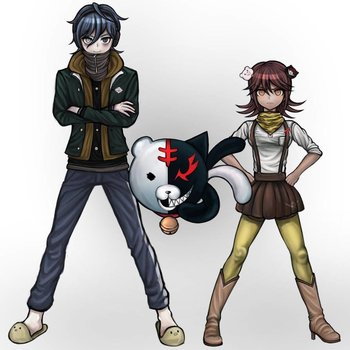 The main directors of the killing game in the English Dub. Despite having contrasting motives and goals, the two Ultimates joined forces to take over the Precept's Peak Academy's system as part of their plan to revolutionize the world. 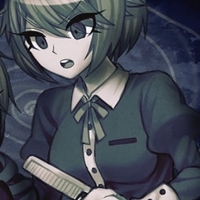 Ayumu's older sister. She has a controlling nature and forced him to dress up like a girl so he can be the "sister" she always dreamed of.