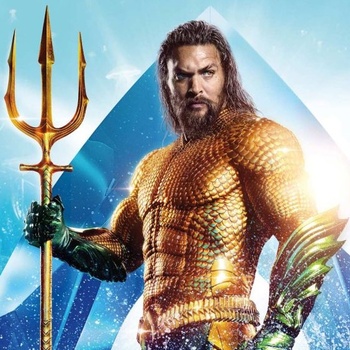 "A son of the land and a king of the seas. I am the protector of the deep. I am Aquaman."
Click here to see him unarmored 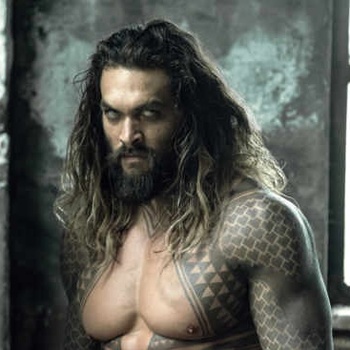 "A strong man is strongest alone, never heard that?"
Click here to see him wearing his Justice League outfit 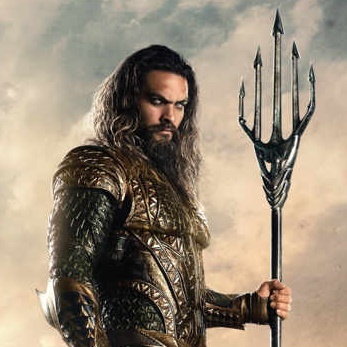 "Fighting the Devil and his army in Hell."
Advertisement:

Appearances in Other Media: Peacemaker | The Adventures of Aquaman & Mera

"I'm nobody. I came 'cause I have no choice. I came to save my home and the people that I love... And if that's not good enough, then screw you!"
Advertisement:

Arthur Curry is the crown prince of Atlantis and protector of the oceans. He was born from an Atlantean royalty mother, Queen Atlanna, and a human father, lighthouse keeper Thomas Curry.

He grew up away from Atlantis, and although he trained with his Atlantean mentor Nuidis Vulko, Arthur resented his heritage from there, preferring to help a remote and poor human village in Iceland and remain under the radar. Then a second invasion of Earth by forces from Apokolips and a lecture by the Xebellian princess Mera compelled him to become a hero to the whole world.

After joining the Justice League and repelling said invasion, he was called upon by Mera and Vulko once more to claim his royal heritage to protect both the kingdoms of the Seven Seas and the human world from the folly of his half-brother Orm. He found the legendary trident of King Atlan that grants tremendous powers over the ocean, defeated Orm and became the new king of Atlantis. However, he also inadvertently created a deadly enemy in the form of Black Manta, who is hellbent on Aquaman's destruction. 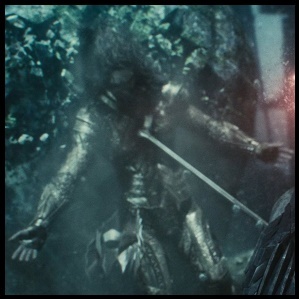 Aquaman perishes against Darkseid in the nightmarish alternate future Cyborg sees glimpses of when interacting with the Mother Boxes. 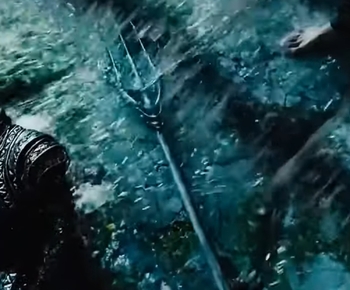 "The time has come, Arthur. Take up your mother's trident!"

"You wield our mother's trident. Powerful, but flawed. Like her. I wield my father's, and it has never known defeat!"
—Orm

The heirloom once held by Atlanna, Queen of Atlantis. It was entrusted to nuidis Vulko, who passed onto her firstborn son Arthur in the hopes he would rise up to his duties. Aquaman would use the quindent during Steppenwolf's invasion and again in his first match with his brother Orm, where it was destroyed.

See this page for information on the quindent's former owner.
Trident of Atlan 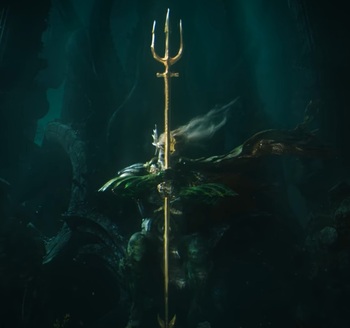 "In the wrong hands it would bring destruction. But in the hands of the true heir, it would unite all our kingdoms above and below."

"It was forged by the greatest weapon-masters in history. Crafted from Poseidon-steel for King Atlan, the first ruler of Atlantis. Legend says the trident was imbued with the power to command the sea."
—Vulko

The legendary trident wielded by the last central king of Atlantis. Forged from Poseidon's steel and bearing godlike powers, the trident grants its bearer absolute control over the ocean.

See this page for information on the trident's former owner.
Feedback