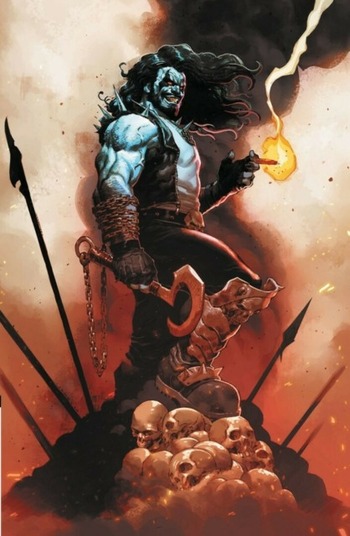 Lobo is a fictional character that appears in comic books published by DC Comics. He was created by Roger Slifer and Keith Giffen, and first appeared in Omega Men #3 (June 1983). He is an alien born on the utopian planet of Czarnia, and works as an interstellar mercenary and bounty hunter.

Lobo was first introduced as a hardened villain in the 1980s, but soon fell out of use with writers. He remained in limbo until his revival as an anti-hero biker with his own comic in the early 1990s. Writers attempted to use Lobo as a parody of the 1990s trend towards "grim and gritty" superhero stories, epitomized by such Marvel Comics characters as Cable, Wolverine, and The Punisher, but he was instead enthusiastically accepted by fans of the trend. This popularity led to the character having a much higher profile in DC Comics stories from then on, as well as starring roles in various series and media in the decades since, including the DC Animated Universe and Krypton (the latter was his live-action debut).

The last of the Czarnians, Lobo is known and feared across the universe as a bounty hunter who never misses his mark. Super-strong, immortal and unkillable, the Main Man has frequently clashed with Superman, although they have on occasion found themselves on the same side.

Click here to go to the character index page surrounding his series.

He also has his own Self-Demonstrating page here.