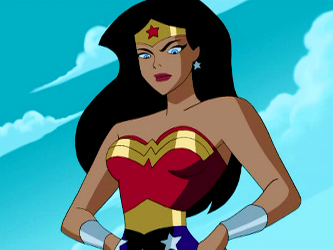 Voiced in Japanese by: Mari Adachi

"I am Diana, Princess of the Amazons, I won't be denied!"
"Hera, give me strength!"

Wonder Woman, known also as Diana of Themyscira, was the princess of the Amazons and one of the original seven founders of the Justice League. She defied her mother's admonition to leave matters of Man's World alone despite the fact that the Imperium were attacking them at the time and stole her outfit from Athena's temple before venturing out in response to J'onn J'onzz's telepathic summons. Due to her efforts on behalf of Earth during the invasion, Diana was invited aboard the Watchtower and she took part in the formation of the Justice League. She took on the name Wonder Woman and continued to serve as a hero with the Justice League.