Characters / Crypt of the NecroDancer

Beware of spoilers, especially in the boss folders

For character tropes from Cadence of Hyrule, see here.

The main character of the game, she has her heart stolen by the mysterious NecroDancer after infiltrating his crypt; and is now forced to venture deeper into the crypt to figure out what's going on. 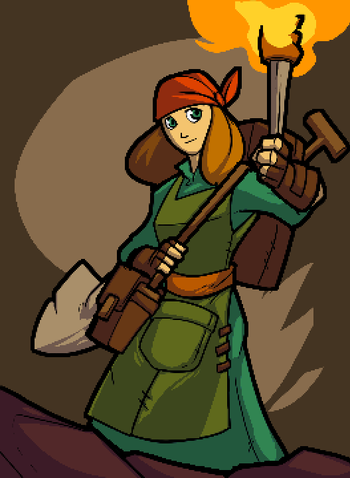 Cadence's mother. She died from illness years ago while Cadence was still young, and is brought back to life by the Golden Lute after Cadence and Dorian steal it from the NecroDancer. However, it turns out that there's a restriction to her second chance at life, and she then heads to the crypt to find answers. Melody is unlocked after you complete Cadence's story. 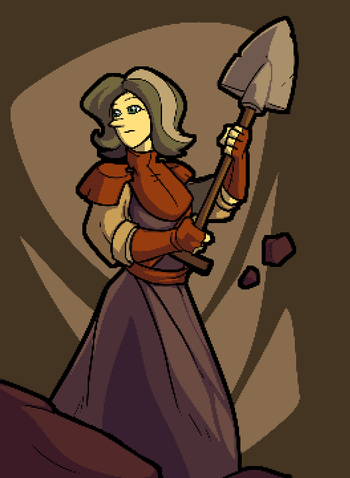 Cadence's grandmother. Aria disappeared years ago and never came back, but it turns out that she was killed by the NecroDancer when she asked for his assistance to destroy the Golden Lute. Melody brings her back to life, and in her place, Aria sets out to finish what she had started and destroy the Lute. Aria is unlocked after you complete Melody's story. Her gimmick is that she only has half a heart of damage at all times, and missing a beat will count as damage, essentially making her challenge equivalent to a flawless run. 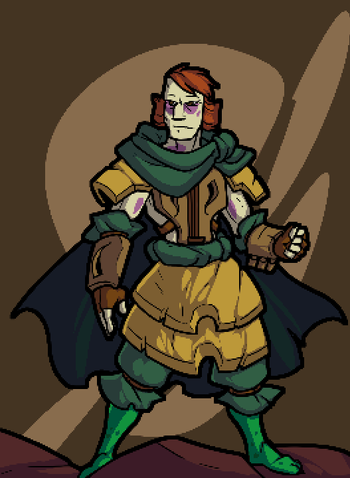 for spoilers!
Voiced by: Gavin Hammon

Cadence's father, who went on an adventure two years ago and disappeared. Cadence later finds him alive in the crypt, but he's been put under a spell by the NecroDancer and doesn't recognize her. Dorian is unlocked after you defeat the Dead Ringer in Cadence's story. 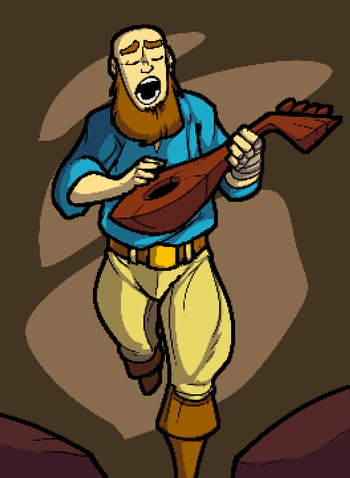 Basically the easy mode of the game, he's the only character who doesn't have to move to the NecroDancer's beat. That's because he is the NecroDancer... before he found the Golden Lute and gained his powers. His real name is Octavian, and he was a Starving Artist who adventured largely out of desperation. Bard is available at the start of the game, and does not need to be unlocked. 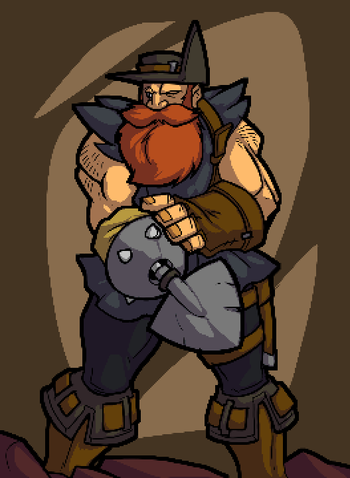 Cadence's paternal uncle, who tried to dissuade both Dorian and Cadence from going on their adventures. He's the only member of the family to not get involved with the main plot of the game and is, instead, an extra playable character where his gameplay gimmick is having an infinite supply of bombs. Eli is unlocked after you clear Zone 1. 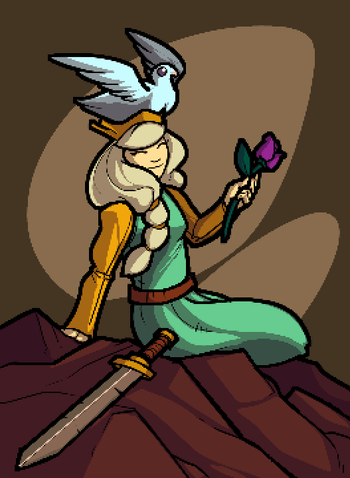 A mysterious woman who is all about love and peace. Her gameplay gimmick is a Pacifist Run where she must clear dungeons without harming enemies. Dove is unlocked after you clear Zone 2. 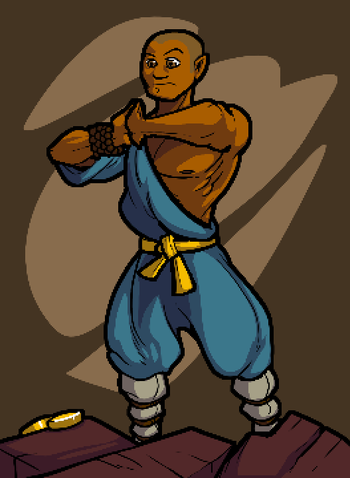 A mysterious monk who goes by the Vow of Poverty and submits himself to deadly penance if he touches gold, which is his gameplay gimmick. Monk is unlocked after you clear Zone 3. 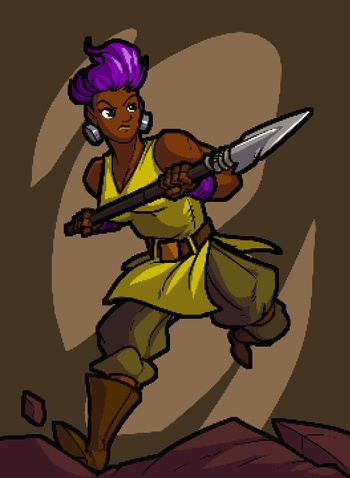 A spear-wielding hunter figure whose gameplay gimmick is making the tempo beat twice as fast. Bolt is unlocked after you clear Zone 4 as Monk. 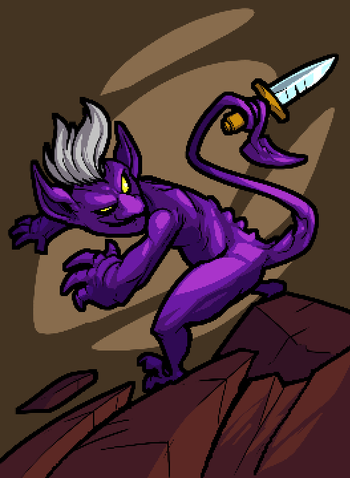 The final character of the base game. Coda is a goblin-like creature whose sole purpose for being playable is to provide the player with the toughest challenge yet. Coda is unlocked after you complete All-Characters Mode. 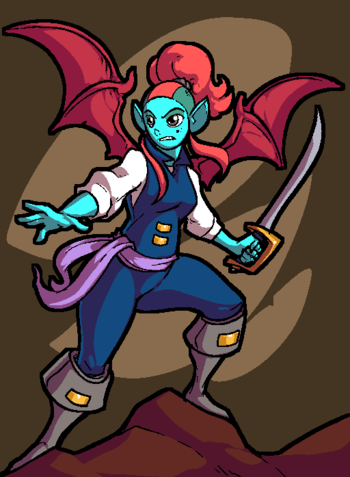 The main character of the DLC prequel Crypt of the NecroDancer: Amplified. 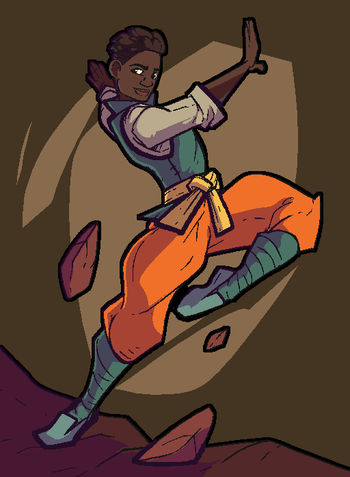 A character who can use key combinations to move diagonally. Diamond is unlocked after beating Area 5. 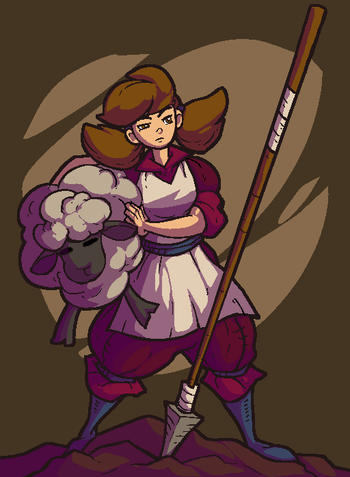 A character who needs to protect a lamb at all costs. If the lamb dies, she dies. 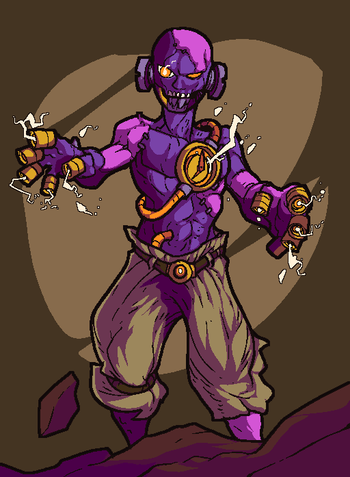 Can kill enemies in one hit, but needs to kill at least one enemy every 16 beats or he dies instantly.

Reaper
The carrier of souls, she gathers the immortal essence of enemies she slays and surrounds herself with them. The army of souls she gathers can attack enemies but also only have one health apiece themselves. The one caveat is that the enemies must be able to drop gold to spawn a soul. 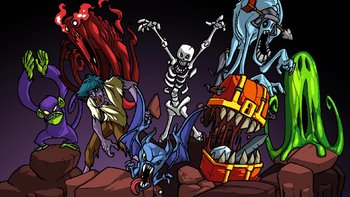 One of the main bosses, King Conga is a gorilla who sits on his throne and plays his bongos as he sends his Conga Line army to attack you. His song is unique in that it comes with a long pause every seven beats.

One of the main bosses, Death Metal is a Grim Reaper foe with a love for metal music. His song comes with the fastest tempo in the game, making the battle against him very hectic and fast-paced.

One of the main bosses, Deep Blues is an army of chess pieces composed of the King, Queen, Knights, Bishops, Rooks, and Pawns. The battle against them is essentially one big game of chess.

One of the main bosses, Coral Riff is an octopus enemy that will attempt to attack you from the watery depths with his tentacles.

An additional boss added in the Amplified DLC, Fortissimole performs a concert to a horde of dancing skeletons.

The penultimate boss of Cadence's story, Dead Ringer is an armored foe who guards the NecroDancer's lair. It turns out that he's actually Cadence's Disappeared Dad Dorian, who's been brainwashed by the NecroDancer. 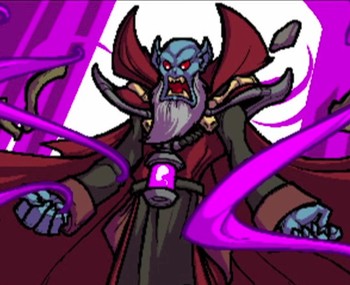 The Big Bad, the game's namesake, and the Final Boss of Cadence's story and Melody's story. The NecroDancer is a mysterious figure who amasses an undead army and casts a musical curse on those who are unfortunate enough to enter his crypt and seek out his treasure; the Golden Lute.

As Aria attempts to destroy the Golden Lute, it suddenly comes to life to defend itself!

Nocturna's final boss. She is responsible for creating the Crypt, and attempts to replicate the Golden Lute. 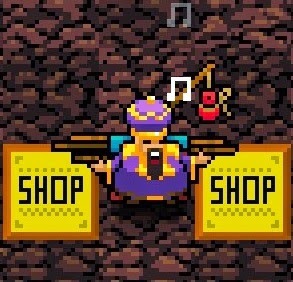 A merchant who's brave enough to set up shop in the crypt and graces the player with his glorious singing. He usually sells three random items to Cadence and two for the other characters. He's an otherwise nice guy, but should you attack him first...