The cast of Crosscode.

Hi! Lea!
The player character. Lea is a Spheromancer in the CrossWorlds, playing as a way to try and recover her memories. Due to a glitch, her vocabulary is rather limited.

Yeah! We're on a roll!
Real Name: Emilie-Sophie de Belmond
Lea's first partner in the CrossWorlds. Emilie is a hyperactive Pentafist from France who strikes up a friendship with Lea in the early levels.

You really wouldn't expect such an abundance of water in a desert area.
Real Name: Toby Tremblay
A fellow CrossWorlds player, C'tron is a brainy Hexacast who begins travailing with Lea and Emilie shortly after they arrive in Maroon Valley. 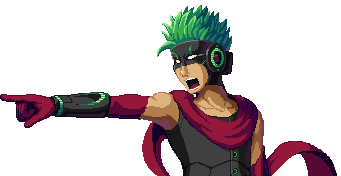 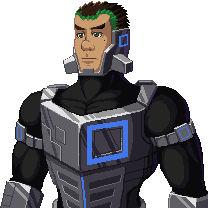 You still won't use her name? Don't be like that.
A Quadroguard who accompanies Apollo. 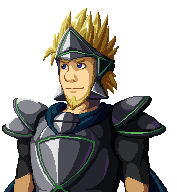 I'm a Triblader. I cut things.
Real Name: Lukas Fink
A Triblader that Lea is introduced to in Rookie Harbor. She doesn't properly get to know him until she joins the First Scholar's Guild and gets trapped with him in the Vermillion Wasteland. 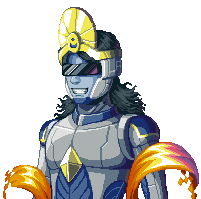 What a convenient stage we have here!
Click to see his actual appearance

A flying avatar with incredible powers over the game and a special interest in Lea. He's eventually revealed to be Gautham, a friend of Sergey, Satoshi, and Shizuka still working for Sidwell.

You'd be wise not to overestimate my attachment to all of this.
A cold businessman who sponsored Evotar research, then blackmailed Satoshi, Shizuka, and Gautham into submission.
Other Avatars

Weak to heat, how surprising.
Satoshi's sister. She looks and fights an awful lot like Lea.

Hello, my dears!
Real Name: Linda Palmer
A Quadroguard and the leader of the First Scholar's Guild. 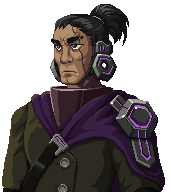 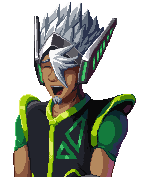 There you are, initialization successful!
Lea's Mission Control and the one in charge of her avatar. He's responsible for giving her advice and logging her out of the game.

I finish this and they will let you go...
A man in the prologue and Shizuka's brother.

Hey there, girl! Welcome to our cozy cargo hold!
A mechanic on the M.S. Solar who guides Lea through several tutorials. 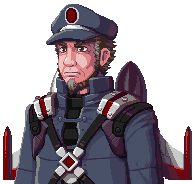 Puttin' even more trash in my cargo hold?
The captain of the M.S. Solar.