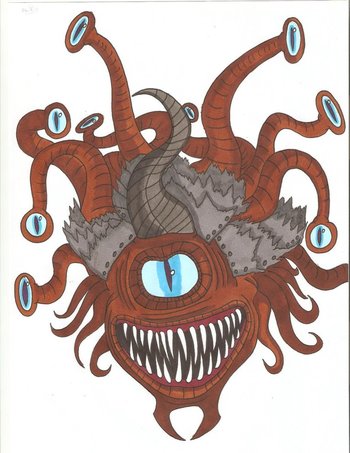 So, guest, how do you like my home? You're welcome anytime.

A mutated beholder who has been working in the Underdark, deep under Kraghammer. Intending to attack the surface, K'varn commands the illithid and the duergar to attack Kraghammer, capturing as many dwarves as possible for experimentation.

King of the duergar stronghold of Emberhold and behind the plot to invade the surface. 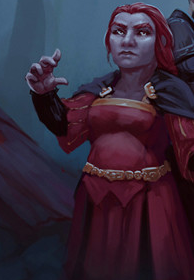 The duergar queen, and Murghol's wife. A powerful mage with a cunning mind.

encountered by the team at the end of Episode 10 and very temporarily brought over to their side during the events of Episode 11. 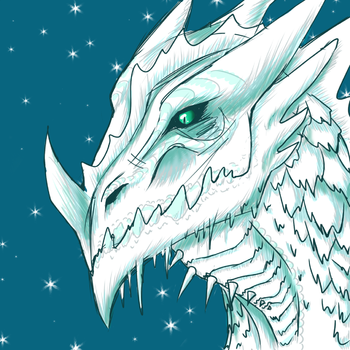 I have not lived these hundred years or so to become the hunted. I am the hunter!

An adult white dragon who Percy, Vex, Grog, and Scanlan - along with new allies Lyra and Zahra - are tasked with hunting by the Slayer's Take. 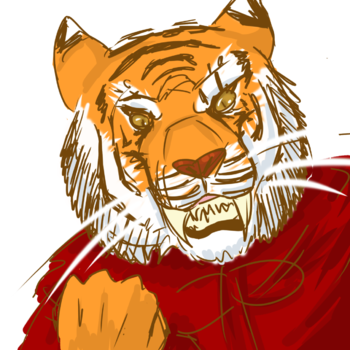 You can try and kill me, and you may very well destroy me, but I'll be back.

A rakshasa (a humanoid tiger-like fiend and shapeshifter) that Vax, Keyleth and Tiberius, along with new allies Thorbir and Kashaw, are tasked with killing. Unlike Rimefang, whose threat is obvious from his sheer power alone, the rakshasa depends on subterfuge and wearing the enemy down slowly before taking them on in combat. Also, kind of a dick. 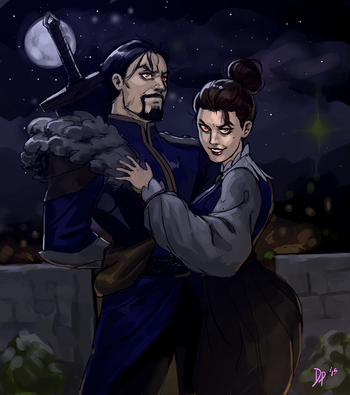 Lord Sylas and Lady Delilah Briarwood are a mysterious couple from Percy's past, best known to him for slaughtering his entire family. As it turns out, the Briarwoods used this massacre to take command of Whitestone (the de Rolo family ancestral home) and seem to have made some powerful connections in Emon. 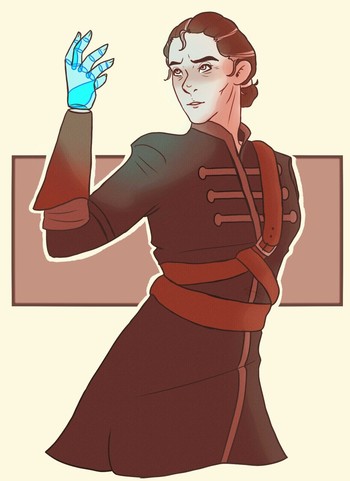 A scientist closely associated with the Briarwoods, and part of the cabal of individuals that took over Whitestone and wiped out most of the de Rolo family. She tortured Percy for information about the castle before his escape and holds a place on his List. As Percy and the rest of Vox Machina discover, she has been working with the Briarwoods to create acidic compounds for their project in Whitestone. Unbeknownst to the Briarwoods, she has her own project - one closely associated with Percy himself... 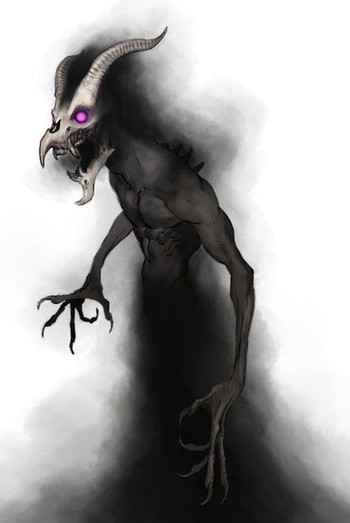 The "smoky entity", as it was previously known, who brokered a deal with Percival in his dreams, and gave him the knowledge of gunsmithing on the caveat that he use it to get his revenge on the Briarwoods and offer up the souls of those he killed. His true motives for doing so are unclear beyond a desire to inspire hatred and violence and thus grow in power.

A bard who served as the tutor for the de Rolo family before betraying them to the Briarwoods. A name on Percy's List.

A human fighter who serves as the Briarwoods' captain of the guard in Whitestone. Sir Kerrion is also one of the names on Percy's list.

A human vampire serving the Briarwoods as a noble in Whitestone.

One of the new nobles of Whitestone under the Briarwoods rule.

A Goliath warrior who serves the Briarwoods as one of the new nobles of Whitestone. 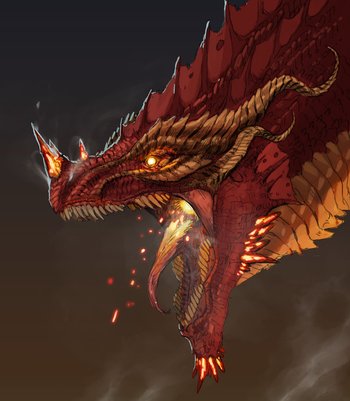 An ancient red dragon of great and terrible power. He leads the Chroma Conclave as its de-facto leader. He has terrorised the lands for many years until he was sealed away in the Elemental Plane of Fire until he was recently released. 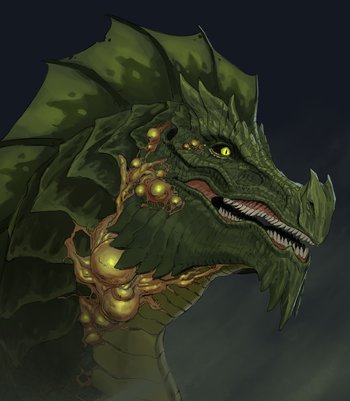 An ancient green dragon and member of the Chroma Conclave. The most mysterious and manipulative of the Conclave, due to her cunning nature and aptitude for magic. 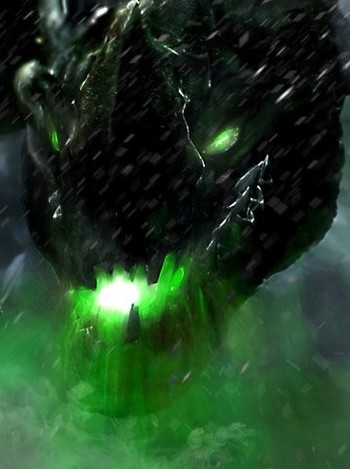 "You dare soil my home after what you've done below?! I will watch you dissolve before I suck down your liquid forms!"

An ancient black dragon and member of the Chroma Conclave. He claims Westruun as his domain, establishing his lair in the nearby mountains and collecting tribute from the Herd of Storms, who he subjected into becoming his enforcers. 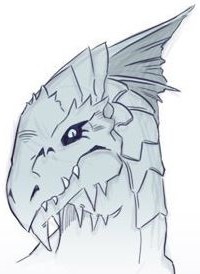 An ancient white dragon and member of the Chroma Conclave. Following the attacks of the Conclave, Vorugal establishes his lair in the ruins of Draconia. 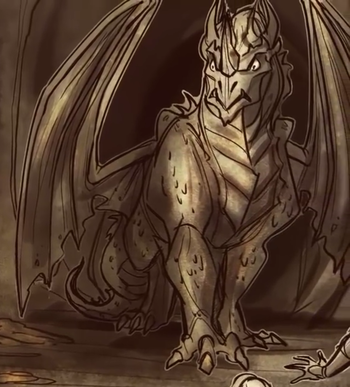 A blue dragon and the youngest member of the Chroma Conclave. Killed before the stream began. 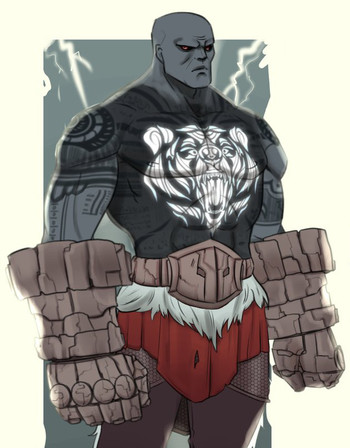 Grog's uncle, who treated him and others of his herd with exceptionally tough love, and had it not been for a chance encounter with Wilhand, Pike's great-great-grandfather, Grog might have ended up very much like him. Instead, Grog refused to harm Wilhand and as punishment Kevdak and the herd beat Grog to near-death and banished him. Now, years later, Kevdak is taking advantage of the Chroma Conclave's attack on Westruun to exploit the surviving and terrified citizens. He currently possesses the Titanstone Knuckles, one of the Vestiges of Divergence sought by Vox Machina. 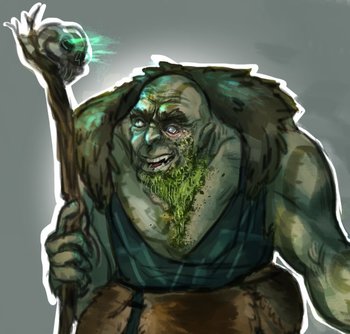 One of the older seers of the Herd of Storms and serves beside Kevdak as his advisor. He has one eye that is completely clouded over, white, with a pus-filled socket that has been perpetually infected over time.

Vecna, The Whispered One 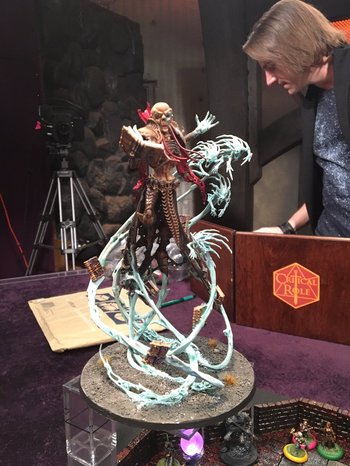 The Whispered One. The Undying King. An incredibly powerful lich whose goal is to become a god, and whose influence has shadowed Vox Machina since their dealings with the Briarwoods. Vecna is the Final Boss of the campaign, the Big Bad of the last arc, and the Greater-Scope Villain of the Whitestone arc.

A mysterious undead knight in service to Vecna. 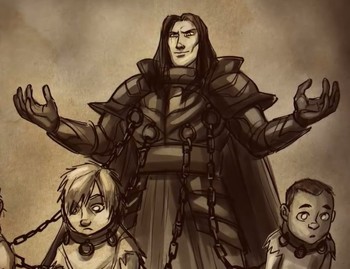 A transfer from D&D's Book of Vile Darkness, the Dread Emperor served as the Big Bad and Final Boss of the pre-stream campaign. A powerful spellcaster who kidnaps children for his own personal use and gain.

Two frost giants that the "Team 1" half of Vox Machina encountered in episodes 18 & 19.

Iconic Heroes
The unwitting Final Boss group of "Goblins: A Pathfinder One-Shot", these defenders of Sandpoint (consisting of a wizard, cleric, bard, paladin and fighter) are actually Ezren, Kyra, Lem, Seelah and Valeros from Pathfinder canon. See the Pathfinder Iconics page for more information about them.
Saundor the Betrayed 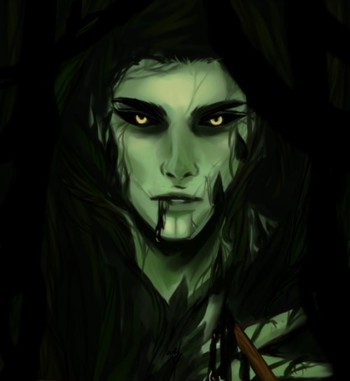 "I have lived a thousand years and a day. I have seen many things; I can grant many gifts."

A powerful Archfey, and a figure of some importance in the Feywild. Long ago he was a mighty warrior, but after being betrayed by someone very close to him, his anger and bitterness corrupted his heart and turned him into a twisted remnant of his former self. In turn, his darker emotions shaped his control of the Feywild, and he is now the source of the Shademirk Bog's spreading blight, a cancerous tree. He is the wielder of Fenthras, Wrath of the Feywarden, one of the Vestiges of Divergence sought by Vox Machina.

A large, hulking and violent Goristro from the Abyss that had devoured the Spire of Conflux. He was summoned to help the party combat Vorugal.

A powerful and corpulent Pit Fiend encountered by Vox Machina in the city of Dis.

The Final Boss of Keyleth’s Aramenté, The Kraken is an immensely powerful entity lurking just through the portal to the Water Plane that the Water Ashari guards.
Quackthulhu 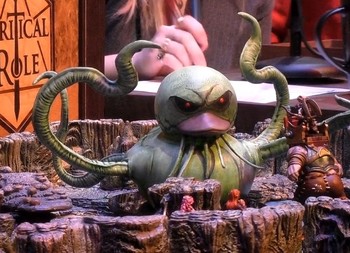 A duck corrupted by an aberrant meteor which became lodged in its back. It is encountered by the Darrington Brigade during their quest to retrieve the fallen star.