Warning!! Due to the nature of this series, there will be a lot of Death Tropes and spoiler tropes. Spoilers will be unmarked and detailed gruesome notes can be found within this page. You Have Been Warned. 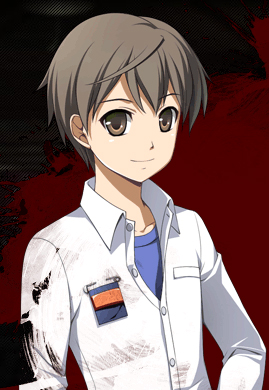 An Ordinary High-School Student at Kisaragi Academy, Satoshi serves as the main protagonist (though the others get their time in the spotlight, especially from Blood Covered on). Generally a Nice Guy, he tends to get picked on a bit by his classmates due to his fear of ghost stories. 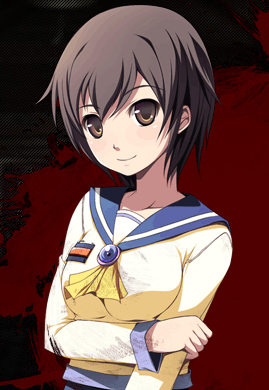 Naomi's known Satoshi ever since they were kids, and loves exploiting the fact that she knows all his weaknesses. However, she does this to try and hide her feelings for him, in typical Tsundere fashion. 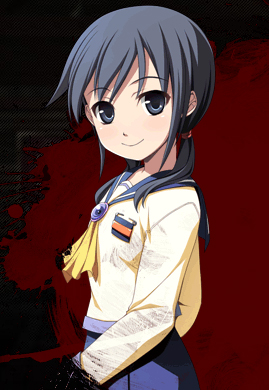 The Class Rep for 2-9, Ayumi is bright, cheerful, and absolutely loves scary stuff. Creepy stories, strange rituals... she loves them all, and can't resist taking advantage of her position to draw her classmates into her games. Especially Satoshi, since he's so funny when he's freaked out...! 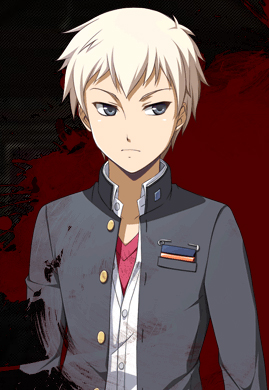 Despite having the Face of a Thug, Yoshiki is actually a pretty nice guy. Likes teasing Satoshi, but that's the norm among his classmates anyway. After they're pulled into Heavenly Host, he vows to protect Ayumi at any cost. 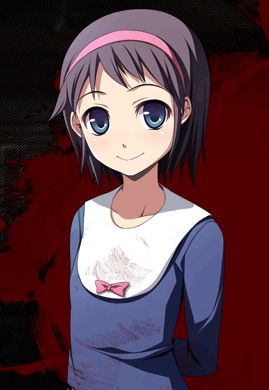 Satoshi's sweet and polite little sister, who's currently in middle school. Came to pick up her brother and wound up getting sucked into Heavenly Host along with the older cast.

Sachiko Shinozaki (The Girl in Red) 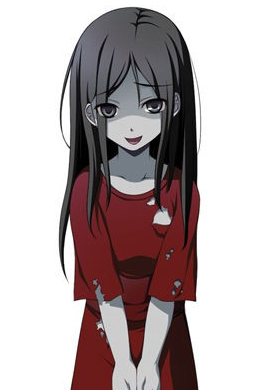 The pivotal character and Mascot of the series. Her backstory differs between versions.

In the original PC-98 game, she was a student of Tenjin High. One day, she was attacked by her teacher who intended to rape her. She ended up falling out the window to her death. The principal decides to help cover up the incident to spare the school’s reputation.

In the Heavenly Host saga, she is the Sole Survivor of the 1973 Heavenly Host Elementary kidnapping and murder case. She provided the testimony that got the killer arrested. After the incident, her family apparently moved away, and her whereabouts are currently unknown.

In actuality she is a malevolent spirit, and the one behind the 1973 incident. After possessing the supposed killer and making him kidnap the other children, she killed them herself and laid the blame on him.

She herself was the victim of an incident in 1953, where she was killed after witnessing the headmaster of the school kill her mother, who then went on to hide her remains in the basement.

Little did the killers know that Sachiko had an ancient evil sitting inside of her- an entire alternate dimension known as the Nirvana/Nehan. In both cases, the killing unleashed the Nirvana.

Sachiko’s hatred towards her victimizers and envy towards those still alive ended up splitting her in two. The good half, White Sachiko, aims to help the characters escape. Meanhile, Sachiko’s hatred fuses with the Nirvana dimension and it’s core (the Witch Queen) to becomes a vessel of thier will; the resulting entity, Red Sachiko, is the Big Bad of the series. 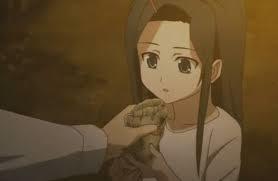 The good half of Sachiko Shinozaki. She informs the characters of her predicament and the truth of the school, and helps them escape.

The Teacher
Sachiko's teacher back when she was alive. He attempted to rape her, causing her to flee out the window and fall to her death. For his very different Blood Covered counterpart, see Yoshikazu Yanagihori.
The Principal
The principal of Tenjin High. He helped cover up the incident with Sachiko and her teacher to preserve the reputation of the school. For his Blood Covered counterpart, see Takamine Yanagihori.