This page lists all of the characters introduced in Corpse Party: Blood Covered, an installment in the Corpse Party series and remake of the original PC-98 game. Return to the main character page for Corpse Party here.

Warning!! Due to the nature of this series, there will be a lot of Death Tropes and spoiler tropes. Spoilers will be unmarked and detailed gruesome notes can be found within this page. You Have Been Warned. 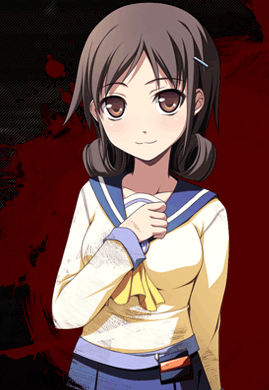 Naomi's best friend, a cheery and irrepressible Genki Girl with a bit of a perverted streak. Or maybe it's just that she loves teasing Naomi...? Either way, she has a way of keeping her head up and looking on the bright side, even in the darkest of situations... 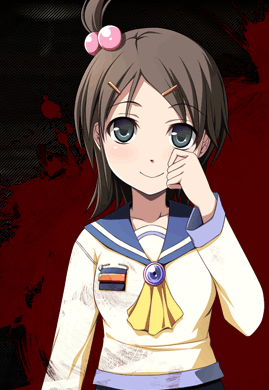 Energetic and popular with most of the guys, Mayu is particularly close to Morishige, with whom she shares a Like Brother and Sister rapport. With her family moving away, she's about to transfer out of Kisaragi, with the Culture Festival being her last day. 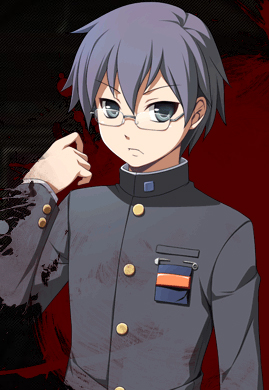 Another classmate from 2-9. He's quite close to Mayu. 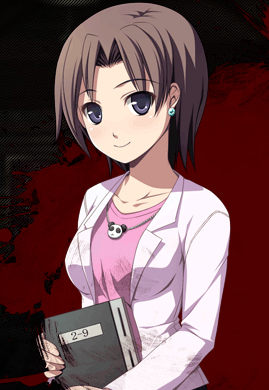 Class 2-9's teacher, who has a knack for connecting with her students. As a result, she's pretty well liked and respected by them. 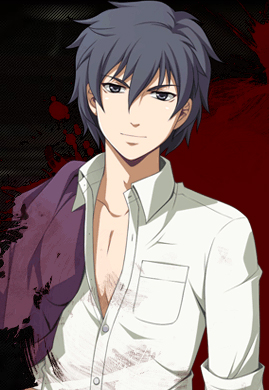 A young man from Byakudan High School who Yuka runs into, mistaking him for Satoshi. He's briefly playable in Chapter 3 when he and Yuka investigate the second wing of Heavenly Host. He tells Yuka that he’s looking for his sister.

In reality, he is an Ax-Crazy sociopath and sort-of Brainwashed and Crazy henchman of the Big Bad. He serves as one of the major antagonists of the series. His goal is to make Yuka his, no matter what. 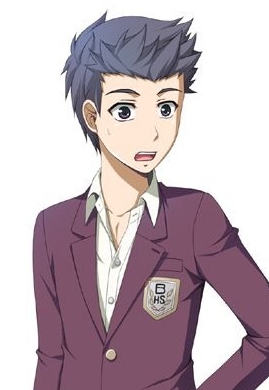 A young man from the same high school as Kizami, and his friend since childhood. 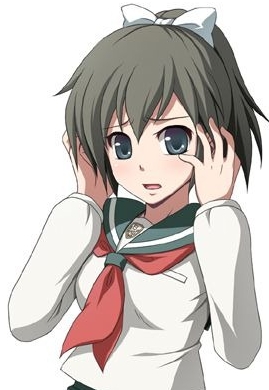 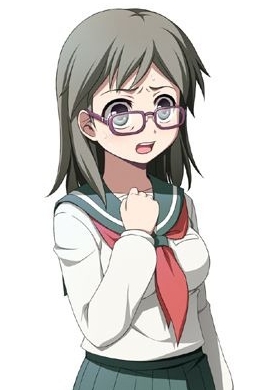 A student who attends Byakudan High School, and Mitsuki's friend since their first year. She likes fortune telling, and was the one who suggested the friendship ritual to the others at Byakudan. 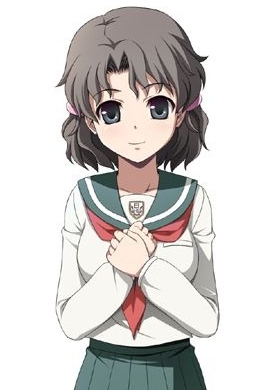 The secretary of the student council at Byakudan High School. She has a strong mind, and a somewhat naïve personality. Recently dumped her boyfriend after she discovered he was cheating on her with three other women. 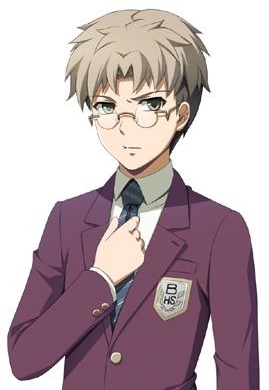 The chairman of the student council at Byakudan High School. 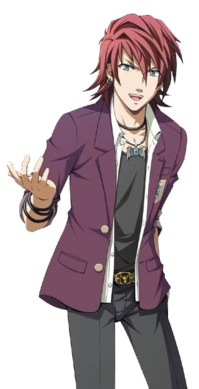 A student who attends Byakudan High School, and who has a one-sided rivalry with Kizami. 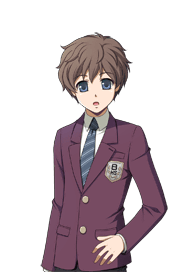 A student who attends Byakudan High School. He likes cute things and video games. We first meet him in Extra Chapter 4 of Blood Covered, but it isn't until Book of Shadows that we see him in the main game. 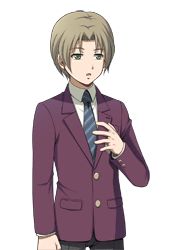 A student who attends Byakudan High School. He enjoys video games and is good friends with Ohkawa. We first meet him in Extra Chapter 4 of Blood Covered, but it isn't until Book of Shadows that we see him in the main game.

A seventh grader at Musashigawa Girls' Junior High. Her story is told in the Extra Chapter 1, where she agrees to help a ghost find the items that were taken from him.

A seventh grader at the same school as Nana. Although she and Nana are in different classes, they are old friends. 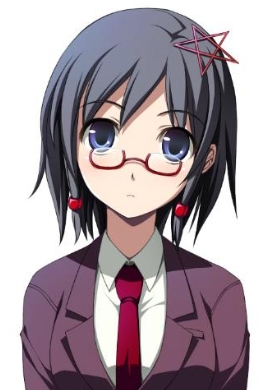 A high school student with great psychic potential. She blogs about curses, and was lodging with Kibiki due to circumstances at home. Ayumi’s greatest hero.

Too bad she’s actually a Yandere towards Kibiki and a somewhat Brainwashed and Crazy henchwoman of the Big Bad. She intentionally posted incorrect instructions for a ritual to ensure that students would become trapped in Heavenly Host so Kibiki would have more subjects to study. 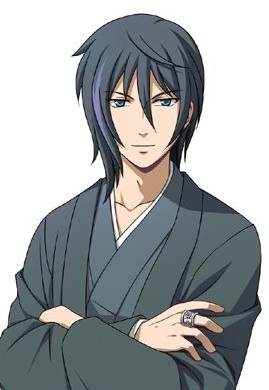 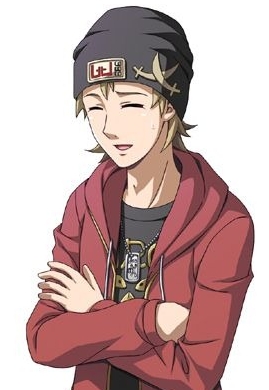 A cameraman helping Kibiki with his case. 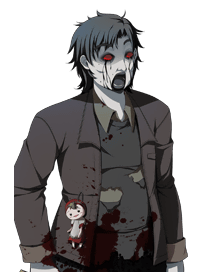 Click here to see him when he was alive 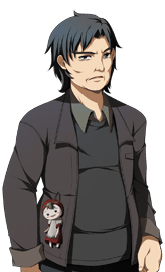 A teacher at Heavenly Host Elementary, and the son of the headmaster. He was arrested for the kidnapping and murder of the three victims in 1973, and was supposedly the master of the haunted school, but was actually being manipulated by Sachiko. 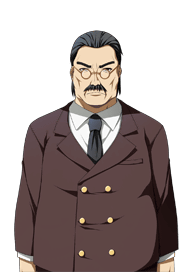 The headmaster of Heavenly Host Elementary, he was well-loved by the townspeople for his dedication to the school's success. Nevertheless, he was responsible for the 1953 incident when he attempted rape on Yoshie Shinozaki, his colleague and close friend, killing her by accident when she fell down the stairway making her escape. He killed the only witness, her daughter, by strangling her to death and was subsequently condemned to repeat his death again and again by the curse as retribution for his crimes. 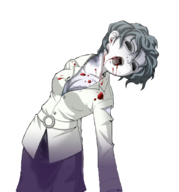 Click here to see her when she was alive 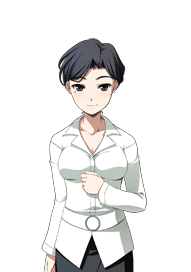 Sachiko's mother, she was a doctor and a health official for Heavenly Host Elementary. She died after falling from a stairway landing in the school. She was the other victim of the incident in 1953. After she escaped being raped by the principal, he accidentally caused her death whilst chasing after her in an attempt to keep her quiet. Her death was subsequently covered up as an accident.

She appears in-game as the ghost in the infirmary. 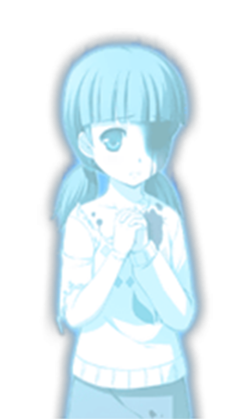 A victim of the 1973 Heavenly Host Elementary kidnapping and murder case, she appears as a ghost with her left eye missing.

A victim of the 1973 Heavenly Host Elementary kidnapping and murder case, she appears as a ghost with the top of her head missing. 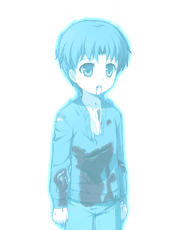 A victim of the 1973 Heavenly Host Elementary kidnapping and murder case, he appears as a ghost with his tongue missing.

A girl from Misato Municipal Brotherhood High that Satoshi and Yuka encounter in Chapter 3. Despite their attempts to communicate with her, she doesn't really respond. Her Name Tag is found in Chapter 5, indicating that she either died shortly after Satoshi and Yuka left or was already dead. Going back to the art room when controlling Kizami in Chapter 3 reveals that the Darkening took over her.

Ayumi's older sister. She's obviously the one Ayumi inherited her love of the occult from.