This character page is for Cookie Run Kingdom’s original characters. For characters first seen in the main series or the spinoff Cookie Wars, see here and here. 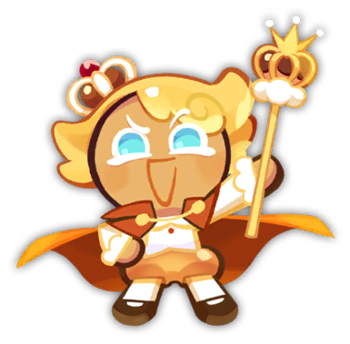 Even before the custard on his head started to take shape, this little Cookie dreamed of becoming a glorious king, worthy of the title borne by the greatest rulers of the past. Custard Cookie III, as he prefers to call himself, may not rule anything yet, but looking at how active he is at waving his scepter and giving orders, it is only a matter of time before he sits on a real throne. 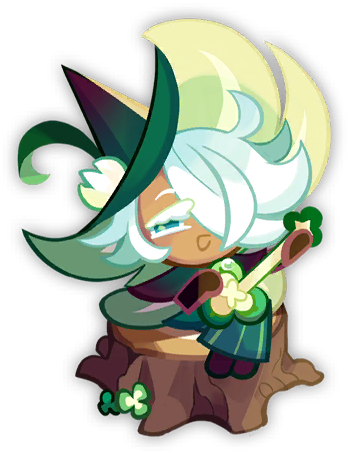 "This very moment deserves a ballad!"

A brightly sunlit summer glade covered with soft clovers. A forest brook murmuring gently not afar. A delicate breeze whispering secrets to your ear. A joyful bustle of a Cookie crowd. Clover Cookie wanders the land in search of inspiration for his poetry of the everyday. Two crunchy feet and a long road ahead, the old grass-woven lute behind his back, and someone to sing a song to - what else is needed to be happy? Sing along, and Clover Cookie's ballad will flow far away, over the forests and ridges of the Cookie World. 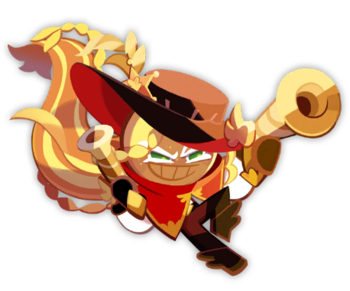 On the sunset of a hard day's work, the saloon door bangs open. "As usual, boss!" she yells. Yup, it's Rye Cookie again, so better get her order straight. She's a bounty hunter in these here parts, sporting a shiny badge and all that. The Wild Gun, they call'er. Maybe she's here on a job, or maybe she's just moseying through town. Last time, there been rumors of a brazen grain heist: someone wiped the wheat silo clean as a whistle, not a single grain left. Wonder who coulda done that? Anyway, better to be careful 'round that one. It's safer to be nice and quiet 'round her, lest ya wanna feel the full barrel from her wholegrain-caliber. 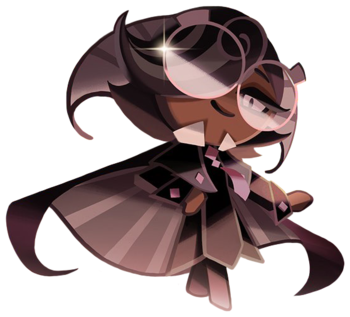 ”Coffee is a magical substance! Counterarguments?”

Precise temperature, precise quantity of coffee beans, precise roasting time! Everything must be in an impeccably precise order for the plan to work. Always busy, always on the go - such is the lifestyle of the founder of the Coffee Magic school, Espresso Cookie. Despite being frequently mistaken for a black mage (yes, sometimes things burn and smoke), Espresso Cookie can't afford to waste a precious second on meaningless explanations. Night after night, this pioneer of magic works on perfecting his grind and brew. "Isn't that too much coffee?" one might wonder. Well, at least there's always the delightful coffee fragrance in the air! 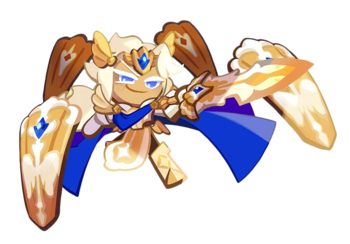 "I will protect the Light! I swear to my sword."

An offspring of a noble Cookie family from a peaceful republic across the ocean, Madeleine Cookie, armed with his family's influence and shiny new armor, is already the Commander of a knight order. On the day of his Commander's Oathtaking, Madeleine Cookie dedicated himself to the Divine and was granted the Sword and Shield of Radiant Light, which he prizes the most among his numerous possessions. The glorious Knight Commander's usual duties included trotting around the city on his snow-white sugar horse or letting his heavy cape flutter dramatically on the wind during his sparring sessions. Not too long ago, the heroic Madeleine Cookie set on a quest in search of the legendary Soul Jam capable of granting Cookies eternal life! Will the noble paladin's first campaign bear fruit? 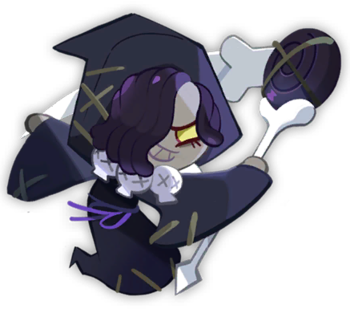 With a great portion of the blackest licorice extract in his dough and a grim-looking scythe, this Cookie is up to no good. From a young age, Licorice Cookie dreamed of becoming a wizard but never received the recognition he so rightfully deserved. Eventually, he turned to the forbidden arts of Black Magic. With time, Licorice Cookie assembled a small army of Chewy Licorice Servants raised to do his bidding. On his dark path, he met Dark Enchantress Cookie. The might of the sorceress astonished Licorice Cookie, and it didn't take long before he swore his allegiance. Now, the Cookie is working flat out to earn his new mistress's favor. And it seems like Dark Enchantress Cookie is not easily pleased, as Licorice Cookie's diary filled with everyday rants and complaints could now fill up a library. 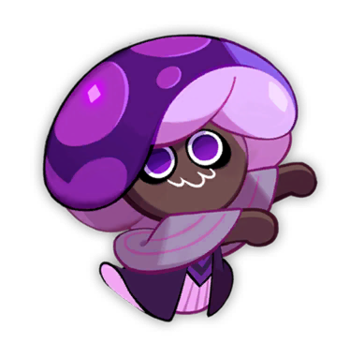 Some mushrooms are good for you, and some are not. Take the Purple Cap Mushroom, for example. Looks so chunky and yummy! That is why that hungry Cookie ate it. Why yes, that was Poison Mushroom Cookie. Always peaceful, always daydreaming. Poison Mushroom Cookie would be mistaken for an actual mushroom in the past, but they were never angry, never at all! Poison Mushroom Cookie greeted and hugged these mistaken Cookies like dear old friends, that's right! They offered every one of them a mushroom of their own—so sweet, so colorful. Just one bite, just one... After all, such big friendly eyes mean no harm. No harm at all... 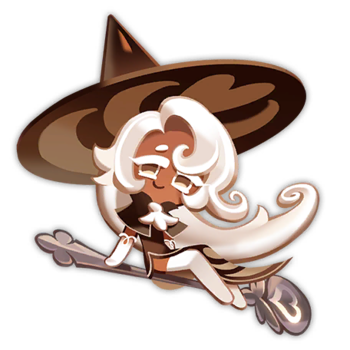 "Something on your mind? I can lend you an ear."

Coffee or milk... that is the question. Why not both? Latte Cookie's dough was formed with coffee most bitter and acrid, balanced with the creamiest and smoothest blend of milk. With her etched staff in hand, she gracefully draws beautifully patterned Latte Glyphs in the air while daydreaming. But watch out! By chance, one of these Glyphs could be a powerful sigil for a grand spell! During her years as a student, she spearheaded research on the development of Coffee Magic with a rather eccentric aficionado of coffee. Thanks to her efforts, Latte Cookie was granted a professorship at the Parfaedia Magic Institute. You'd think that a professor would be more punctual, especially with their own lectures. But not Latte Cookie! She's more invested in savoring a warm latte before class. Though far from achieving the Professor of the Year Reward, she knows a thing or two about inspiring her students. With her genuine compliments and encouraging smile, Latte Cookie is the favorite professor of many. 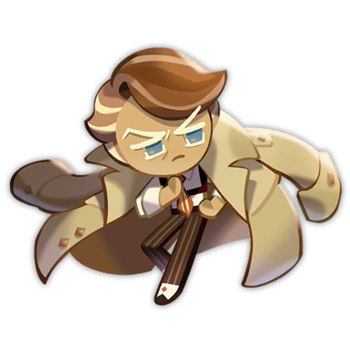 "Let's start from the beginning."

Pristine coat. Perfect shirt. Combed hair. He always starts his day fresh, prim, and proper. But it never lasts long... After being dispatched to spells gone awry from alley to alley, it looks as if Almond Cookie has been on the job for days on end without a single break. If it isn't an enchanted grimoire moving on its own, it's some magical cauldron spewing Jellies without pause. Despite the chaos on every scene, the veteran detective solves each case by the book with pinpoint precision. The almonds in his dough give him a hardy, rough and tough crisp that can withstand just about anything thrown at him, but he's overworked to the point that his dough no longer contains the rich scent of almonds. "Can't even get a coffee break," he sighs as another magical mishap needs his attention. With his coat fluttering in the wind, Almond Cookie looks upon his city and vows to keep going at it until he can finally relax with a decent coffee. 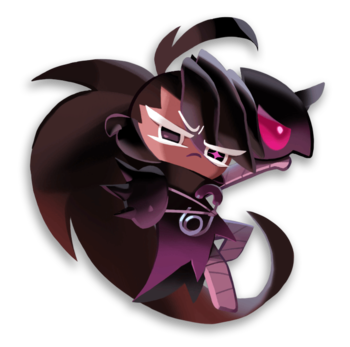 Harsh wind, crooked trees, streets ravaged by the war... Who is it there, hiding among the shadows? Black Raisin Cookie, the sole protector of the unfortunate remnants of a once-great Kingdom. Made of shriveled, wrinkly raisins, this Cookie has learned the value of survival no matter what. Even having lost one arm to the dangers of this rough barren, this Cookie keeps hunting for scarce food to feed those who put their trust in her. Despite all the hardships, Black Raisin Cookie doesn't lose the warmth of a Cookie heart: everyone deserves help, even a sorry one-legged crow. A new day is breaking, and another challenge is here. But Black Raisin Cookie will be there for the villagers, watching over them from the dark. 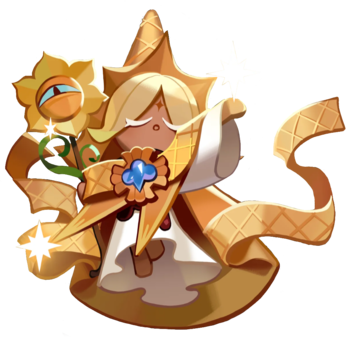 There are not many Cookies on Earthbread who could inspire hope as Pure Vanilla Cookie did. Born from nature-blessed cream and a fragrant vanilla bean, he was the epitome of Cookie kindness and faithfulness. Pure Vanilla Cookie strived to forgive the wrongdoer and heal the wounds of Cookies and animals alike. Though a powerful wielder of magic, he would use his spells not for his own good, but for the good of everyone. The Cookie took an arduous pilgrimage down the Sugar-Free Road. What Pure Vanilla Cookie learned through the Trials is unknown, but crowned with a bright halo of light he returned to found the Vanilla Kingdom, a land of freedom and learning, and a beacon for those seeking love and peace. Pure Vanilla Cookie stood by his friends until the very end, warding off the Darkness with a heartfelt smile.

The heroes who fought in the Dark Flour War against Dark Enchantress Cookie for the Cookies' destiny and mysteriously disappeared after the Final Battle. Graced with Soul Jam of the purest kind, wise and powerful, they were also the rulers of five ancient Cookie Kingdoms in their golden age. 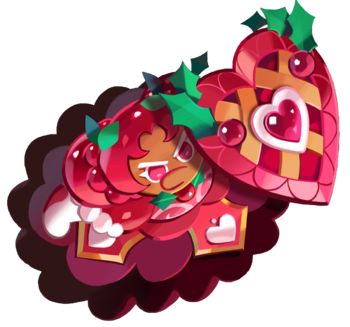 What else could result in such an overwhelming passion if not the reddest hollyberries, ripened under the hottest summer sunlight? Hollyberry Cookie believes that every friendship, like victory, should be triumphant. After all, there is nothing in the world as hard as trust! 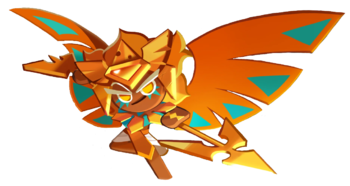 With an enormous amount of golden cheese in the dough, this Cookie gleams as if fashioned of pure gold. Golden Cheese Cookie dwells in a gilded palace atop the highest mountain of the Golden Cheese Valley. Everything that surrounds her shines with opulence - so bright, it is hard to look up.

The last bean, devoid of any sweetness, fell down from a withered branch of a lonely cacao tree growing above the edge of a cliff. Lying there in frozen soil, enduring snow and wind, this bean wasn't aware of its destiny to become the main ingredient for the cold and reclusive Dark Cacao Cookie. 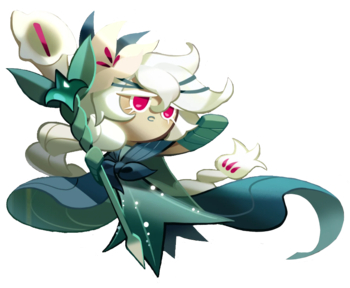 A solitary beam of moonlight shines in twilight. Like a pale lily, touched by the softest drops of rain, a Cookie silently entered the world. Her serene eyes reveal a curious and eager nature for seeking truth. 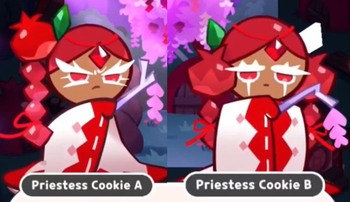 The two priestesses of Pomegranate Village, they’re the last survivors of Pomegranate Cookie’s curse which destroyed their home. Planting several traps to protect the newly-recreated village from danger, they gradually warm up to Gingerbrave’s band after they prove their trustworthiness. 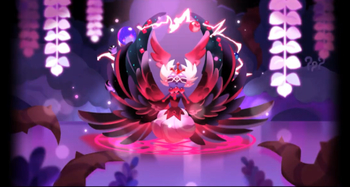 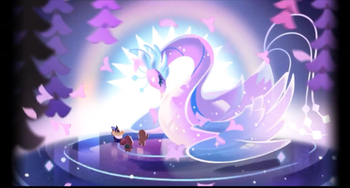 An entity that watches over the world, it was consumed by the curse that plagues the land and went berserk. 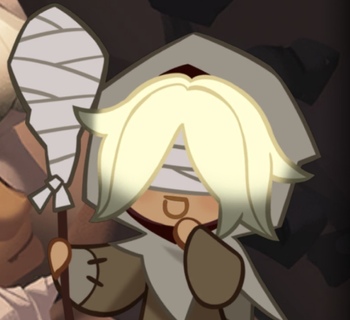 "My patients need quiet. Please, do not disturb them."

A healer who resides in the village Black Raisin Cookie is guarding.