List of characters from Coffin Princess Chaika. Currently a work in progress, due to Loads and Loads of Characters.

Be wary of unmarked spoilers.

Current employer of the Acura siblings and daughter and heir apparent of the late Arthur Gaz. After running into Toru during his foraging, she is impressed by his fighting skills after he helps her defeat a dangerous mountain creature, hiring him (and Akari) to help her in turn recover her father's remains, now being used as potent energy sources, and give them a proper burial. Naturally, such a task ruffles some political feathers among the coalition that saw to Arthur's defeat five years ago, and as such she is a wanted person seeking protection — something Toru and Akari are only more than happy to offer. Despite her infamous legacy, Chaika is nevertheless sweet kid, who also happens to suffer from amnesia regarding the five years since Arthur's death.

Chaika is trained in magic, channeling her spells through the gandr she usually keeps (dismantled) in the coffin she carries around with her. While her spells have proven very useful during combat itself, their effectiveness outside of combat has been... mixed. Aside from this, she seems to be a decent magical engineer, as shown by how she quickly refurbishes and repairs the run-down vehicle they find (and eventually use). 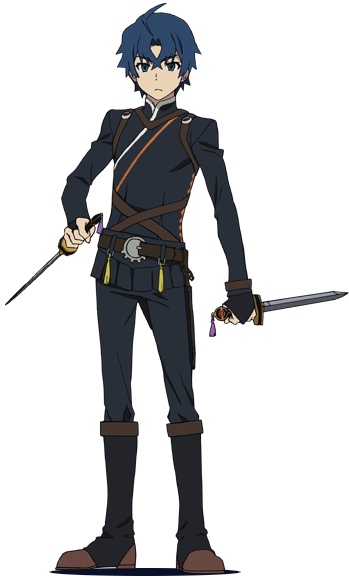 Raised as a Saboteur since childhood, Toru knows no other way but the way of the sword — which makes life after the downfall of Arthur Gaz all the harder. Bereft of all purpose in life, Toru slipped into five years of solitude while as the now-peaceful world moved on without him, with nobody but his adopted sister Akari looking after him.

While on a foraging trip with Akari, however, he meets a silver-haired girl who calls herself Chaika, who offers him an unusual hunt: that for the remains of none other than Arthur Gaz, her own father, to give it a decent burial. Despite every evidence pointing to the fact that gathering his remains is a bad idea (including reigniting a massive war), Toru nevertheless accepts the chance to relive the kind of life he thought he would never experience again.

As a Saboteur, Toru specializes on espionage; when he is forced in direct combat, however, he wields a pair of comblades and, when if needed, he can tao onto the Iron Blood Technique, which boosts his reflexes and strength in exchange for stamina.

Toru's younger adopted sister, who has been looking after him ever since Arthur's fall. While disturbingly devoted to her brother, Akari's patience has its limits, and after five years she finally forces Toru to choose between either finding some work or getting stuffed at the taxidermist. Naturally Toru chooses the former, and in the process they find a longer-term job: guarding Chaika as she collects her father's remains, something she is content with now that Toru's old spirit has been rejuvenated.

Like Toru, Akari is also a trained Saboteur, and is more than capable of holding her own in a direct fight. Her weapon-of-choice for these occasions is a war hammer, though she's also more than willing to use this on Toru himself to keep him in line. For his own good, or at least that's what she claims... Obviously as an Acura, she can also use the same Iron Blood technique to boost her combat abilities.

Frederica is a dragoon, a feyla known for its powerful magic and strength. They are usually sought out by warriors to be contracted, due to the potent abilities they grant once bonded, but due to their comparative rarity this was easier said than done. Frederica herself was bonded to Dominica Škoda, a feat that contributed to her reputation as a warrior before she became one of the Heroes that finally put Emperor Arthur Gaz to the sword.

When Dominica retreated from the world after the war, Frederica followed her, but could only watch helplessly as her master fell into apathy. Despite Frederica's best efforts — even going so far as to take the form of Dominica's dead sister, Lucie — Dominica passed away, and the dragoon was soon left alone in the forest mansion her master kept as her home.

There she stayed, alone for years, trying to figure what to do with herself now that her master was gone... However her ennui was broken by the arrival of some unexpected visitors to the Škoda manor: Chaika and her two warrior companions. Curious, she impersonates her departed master to figure out their motivations, but when it becomes clear to her what they really wanted, Fredrika saw it as a chance to ease her boredom, and maybe get a good fight as well.

Needless to say, Frederica was thoroughly out-maneuvered and defeated by the Acuras, though she didn't really mind that much, and willingly surrendered the body parts she was guarding. She even decides to join the trio in their journey, finally finding a reason to move on from the empty manor she's secluded herself for so long: a chance for a rematch with Toru, Dragoon to Saboteur.

Eventually. Until that time comes, Frederica is willing to tag along for the duration, as where Chaika goes, trouble (and good fights) are sure to follow...

A supernational organization made after the war. Officially they're supposed to do as their name states: help with the recovery and rehabilitation of the territories of the allied nations in the wake of the Gaz Empire's defeat, though this also includes making sure whatever peace was won gets maintained. Ironically, the Gillette Corps' investigation and eventual pursuit of Chaika is considered a side job by the powers-that-be.
Konrad Steinmetz
Voiced by: Tetsuo Kanao (Japanese), Rutherford Cravens (English) 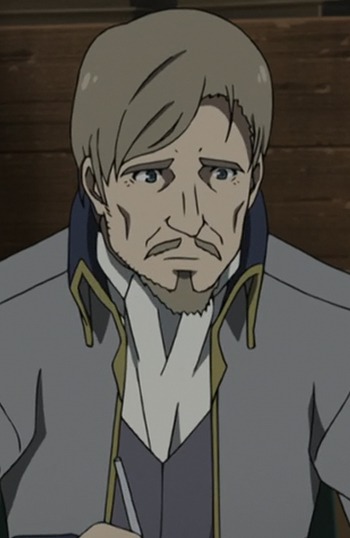 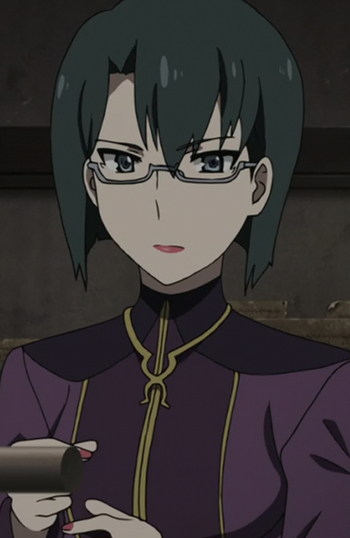 A knight of the Kingdom of Vema. The leader of the Gillette Corps.
Mattheus Callaway
Voiced by: Shuta Morishima (Japanese), Mike Yager (English)

A male Wizard who can control beasts such as fayla.
Zita Brusasco
Voiced by: Yumeha Koda (Japanese), Caitlynn French (English)

A female Wizard who specializes in magical devices.

An assassin working for the Klein agency. She has a massive crush on Gillette.

A mercenary and second-in-command of the Gillette Corps.

A Chaika wearing red that wants to take revenge on Arthur Gaz's killers, reclaim his remains and rebuild his empire. 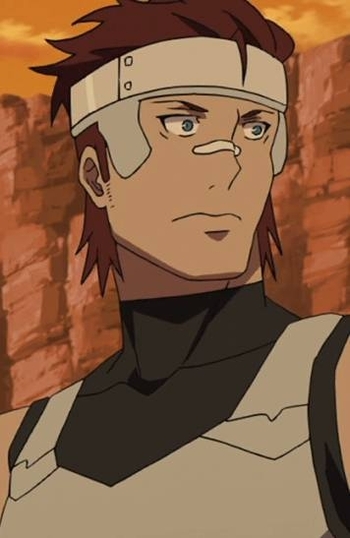 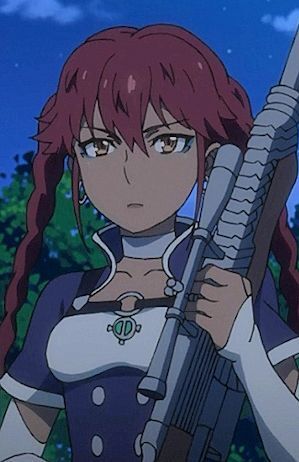 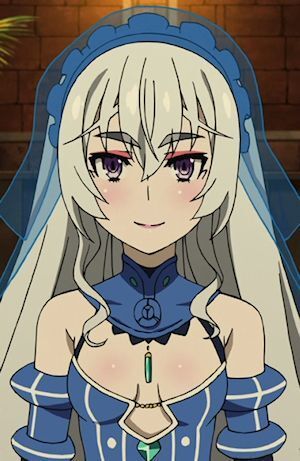 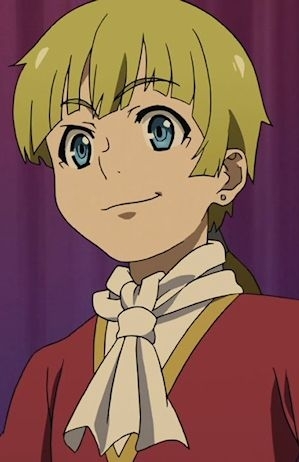 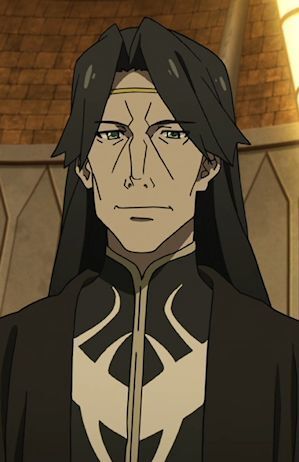 A wizard who follows the Duke Gavarni. 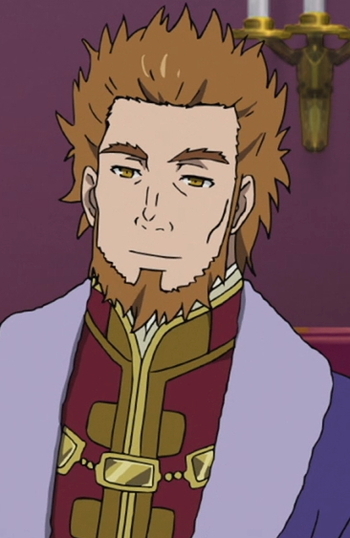 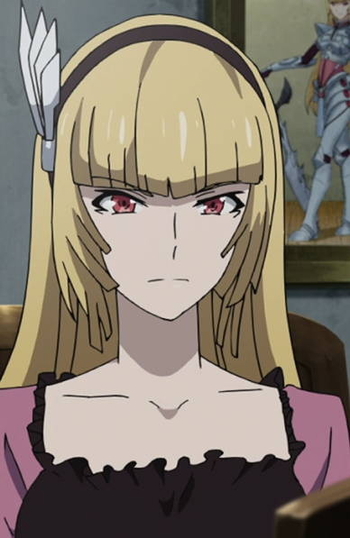 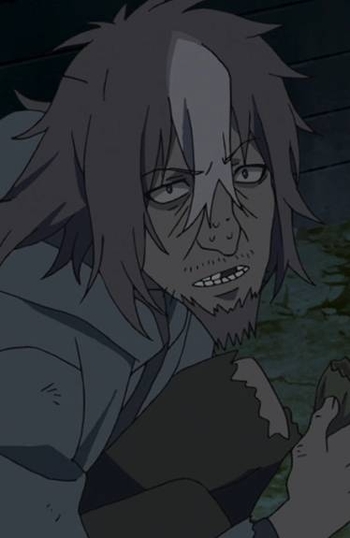 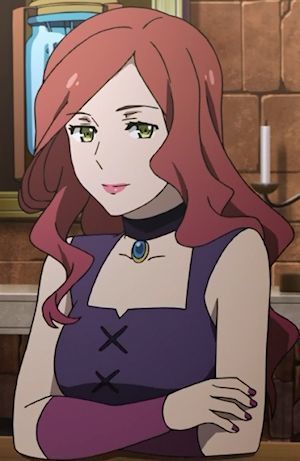 A wizard who went into the wine business after the end of the war, she's managed to become quite successful at her endeavor. Most of her employees are retired soldiers who had nowhere to go, so they're obviously quite grateful (and very protective) of their boss.

Despite holding onto Gaz's heart, she never found much use out of it (as it had nothing to do with making wine anyway), which is why she wasn't too bothered to give it away to Chaika and Tooru's group... But only if they beat her within a specified time limit during a non-lethal match with her. 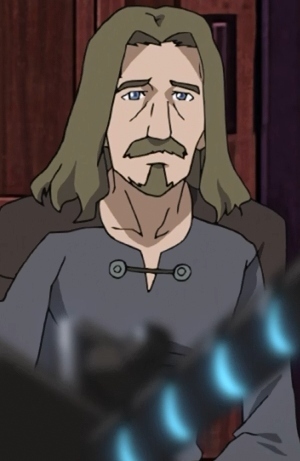 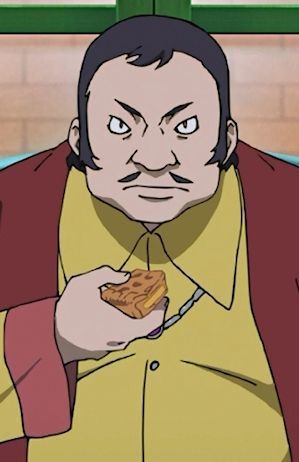 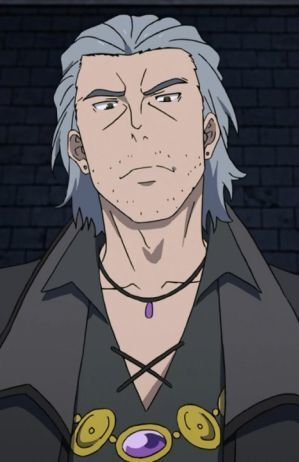 The lord of the Principality of Hartgen and leader of the Eight Heroes. He was the one who dealt the final blow to Arthur Gaz and (supposedly) to Princess Chaika, thus ending the war. 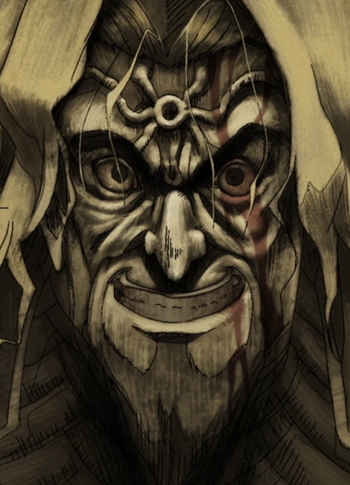 The Emperor of the Gaz Empire and the most powerful Wizard to ever walk the earth. He had lived for 500 years and trapped the world in a state of constant warfare and strife. Nobody was able to defeat him until the Alliance of the Six Nations assembled the Eight Heroes and dismantled his empire before killing him.
Jasmine Orlo 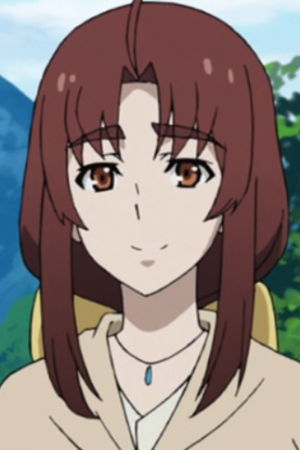 Voiced by: Akane Kohinata (Japanese), Amanda L. Baird (English)
A traveling merchant that was associated with Acura Village. Toru and Akari knew her when they were younger.
Guy
Voiced by: Ayumu Murase (Japanese), Kalin Coates (English) 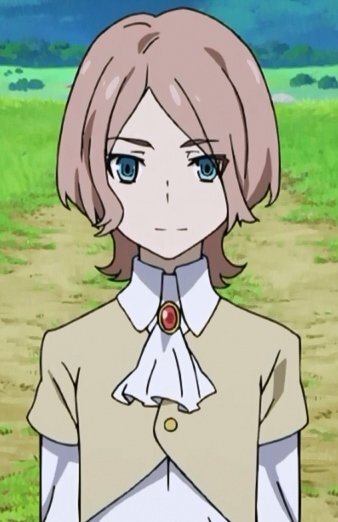 A mysterious being who looks like a teenage boy.
Lucie Škoda 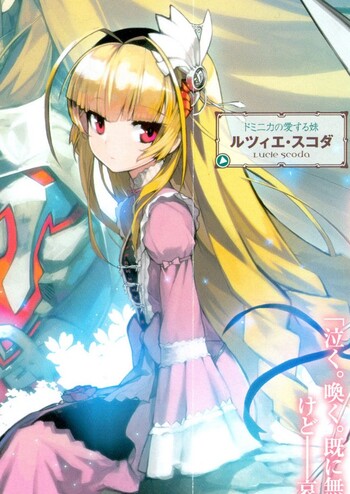 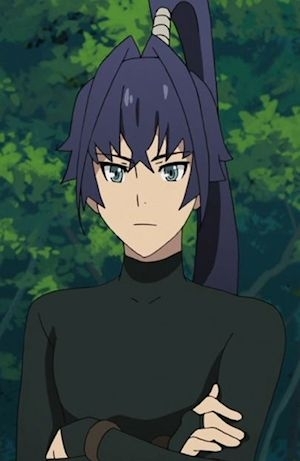 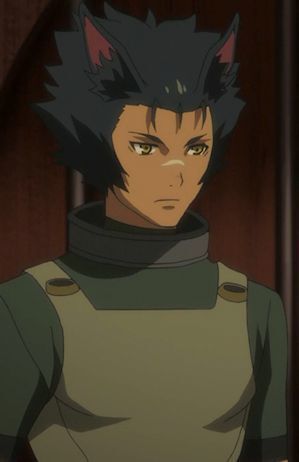 A demihuman special operative in the employ of Alexander Izhmash, one of the last remaining original ones.
Niva Lada
Voiced by: Sachie Hirai (Japanese), Brittany Djie (English) 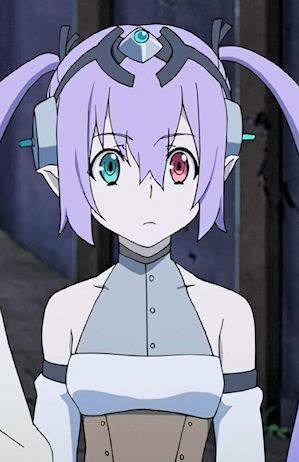 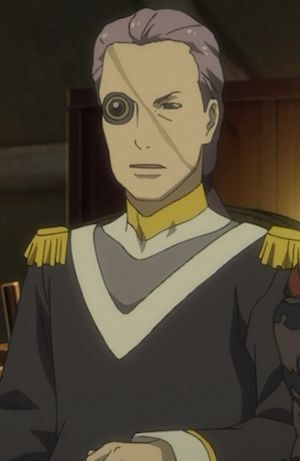 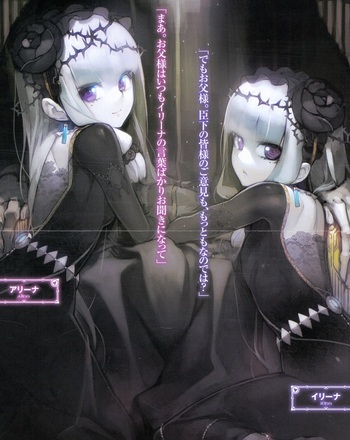 A pair of identical twins who appear to work for Stephan Hartgen. Formally they pose as his adoptive daughters.
Spoiler Character

The third Black Chaika, who works with Stephan Hartgen.

A group made of former citizens of the Gaz Empire. They hope to revive the Empire but over time, lost sight of their objective and became thieves and swindlers.
Julia 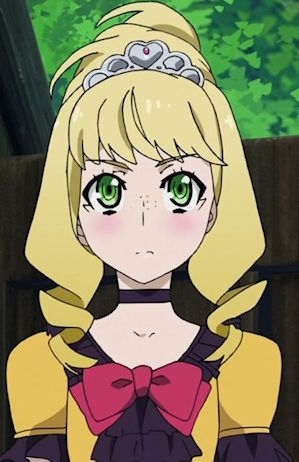 Voiced by: Kaori Sadohara (Japanese), Margaret McDonald (English)
A young thief who takes the persona of Princess Chaika and act as the figurehead of the Neo Gaz Empire.
Mart 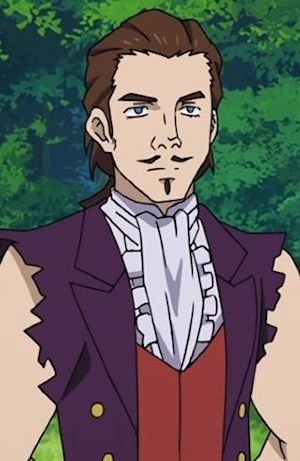 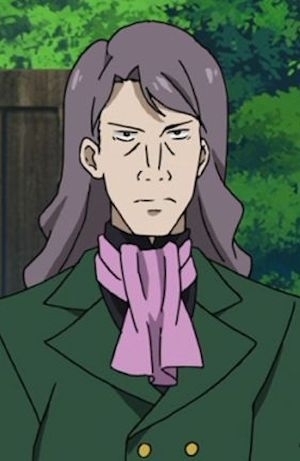 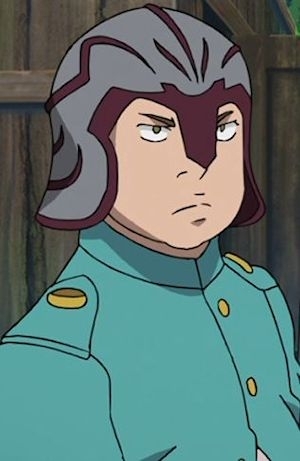