This page is a work in progess so feel free to chip in!

Characters that either has a mascot or has a main role in the game.
Aunt Arctic 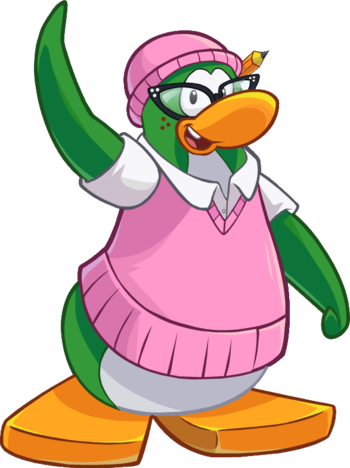 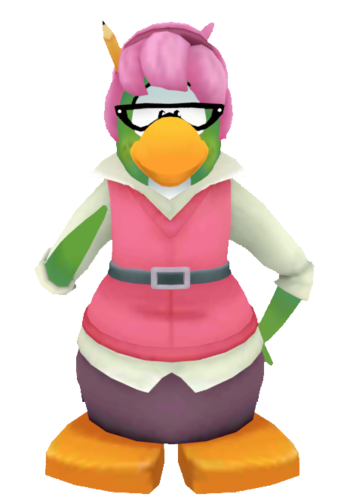 "The Island needs you. Are you ready?
The Editor-in-Chief of The Club Penguins Times, the island's offical newspaper. She runs the advice column and writes articles about many different topics, such as current parties going on around the island. In Operation Blackout, she is revealed to be the Director of the Elite Penguin Force or the EPF. 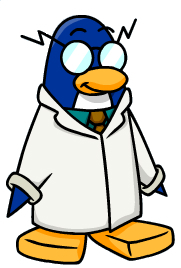 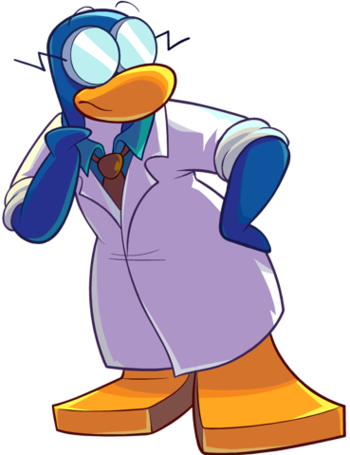 The island's resident inventor. He has made countless of inventions over the years, such as the Pizzatron 3000 and the Time-Trekker 3000. He also worked for the PSA, then the EPF, and goes by the codename G. He is the Tech lead of the EPF. 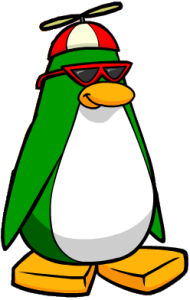 Quack, whack, thwack, ack! Why can't I be on the right track? Who's the penguin with the Propeller hat? It's me, the Rookie, And that is that! 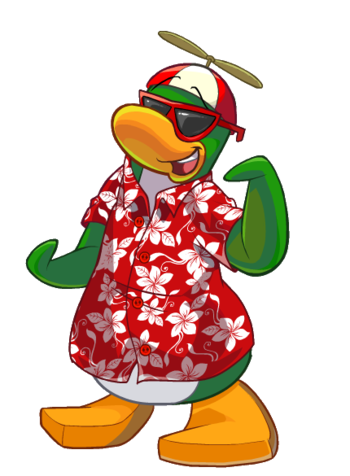 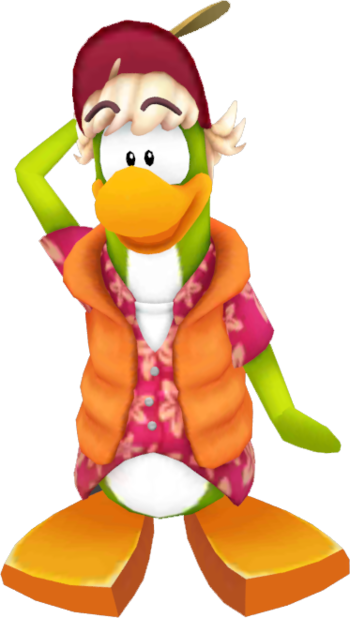 2017 Design
Rookie is the Public Relations officer and Comms lead of the EPF. He used to be in the PSA before it disbanded. He's absentminded and accident-prone, but he's friendly and energetic.
Dot the Design Gal
] 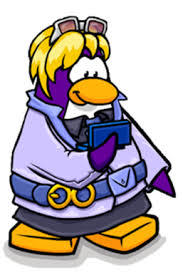 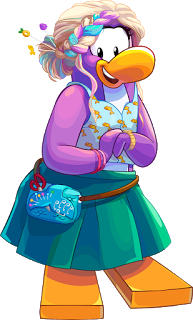 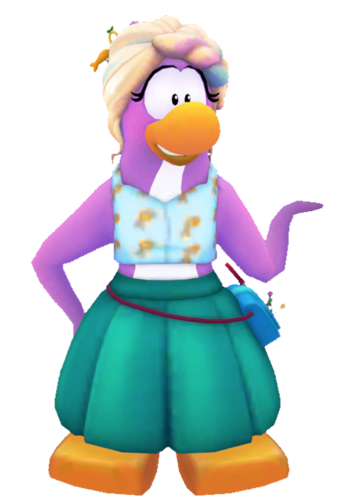 2017 Design
Dot is a fashionista who loves to design clothes. She is also known as Dot the Disguise gal, the stealth lead of the EPF.
Jet Pack Guy 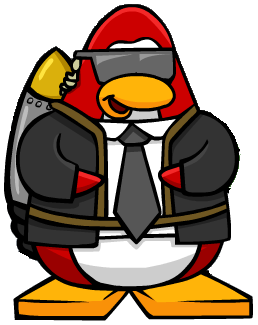 Watch out Herbert! This guy's back in the sky! 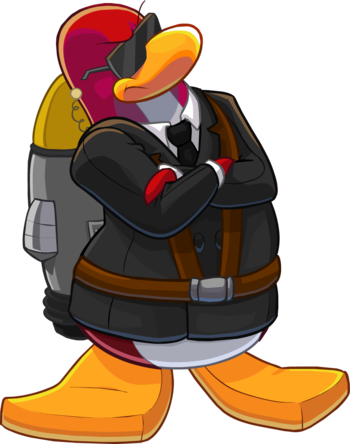 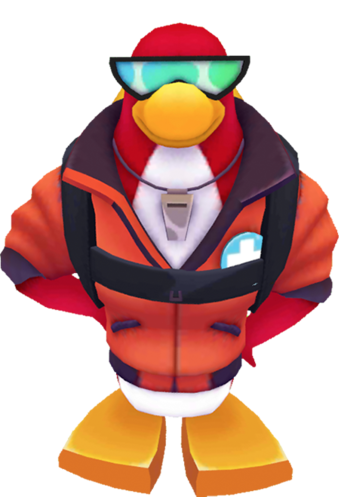 2017 Design
Jet Pack Guy, or JPG as Rookie likes to call him is the tactical lead of the EPF. He rarely takes off his jet pack or his Cool Shades.
Herbert Percival Bear, Esquire 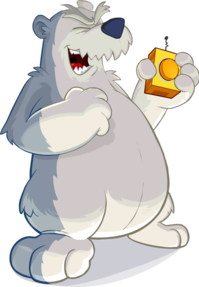 You haven't seen the last of me.
A polar bear from the Arctic Circle, Herbert is the main antagonist of Club Penguin. He detests the cold, parties, and noise. He wants to warm up the island. He is aided by a crab named Kluzty. 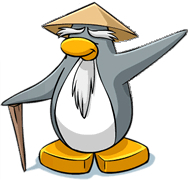 Long is the journey, With many wins and losses, We must learn from both
Sensei is a ninja and he teaches penguins how to play Card-Jitsu at the Dojo. He is a master of all the elements, which are water, fire and snow.
Captain Rockhopper 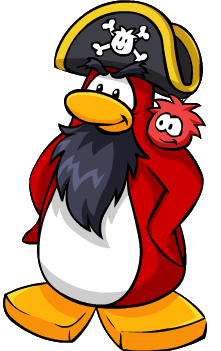 It be gettin' choppy! Lower the sail! Land the masts! Man down the hatches! TRIM ME BEARD! No wait, me beard be perfect.
Captain Rockhopper is a friendly pirate who comes to the island at intervals to sell treasures he finds on his voyages. He is accompanied by his red puffle Yarr.
PH or Puffle Handler 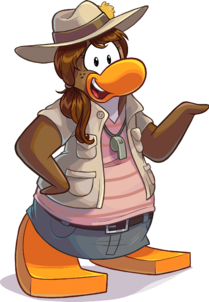 Crikey!
PH or Puffle Handler first appeared in the spinoff DS game Club Penguin: Elite Penguin Force. She helped the EPF train Elite puffles. She then became a mascot on the island. She loves puffles and although mostly everyone calls her by PH, her real name is Paige.
Cadence 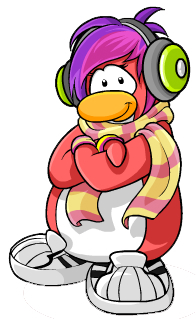 It's time to dance! 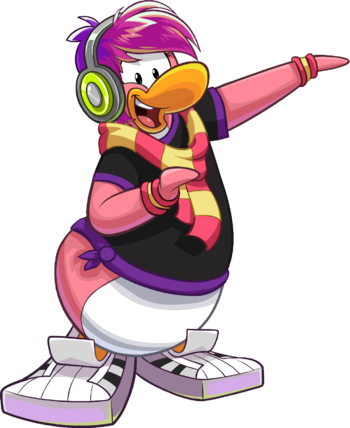 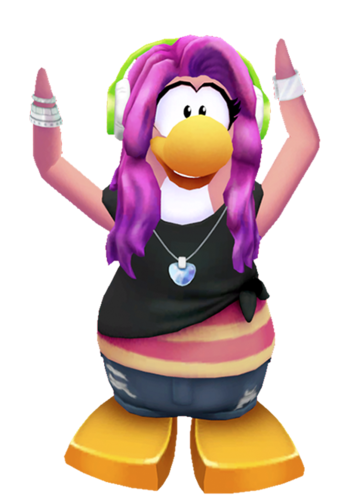 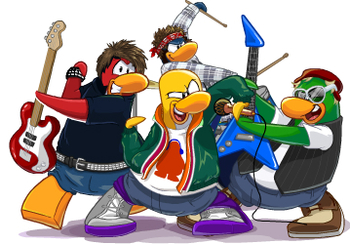 Just keeps getting better, Wish I could stop time in its place, Best day ever!
Club Penguin's most popular band. The Penguin Band perform at the Music Jam parties along with Cadence. The band members are Frankynote The yellow penguin, the singer of the group, Petey Knote The green penguin as the gutarist, Stompin Bobnote The red penguin as the electric bass player and G Billynote The blue penguin as the Drummer.

Characters that only appeared in special events.
Tusk 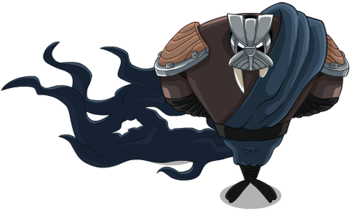 Revenge is a dish best served cold.
The antagonist in Card-Jitsu Snow, Tusk was the Master of Snow and sent armies of evil snowmen to defeat Sensei and his ninjas.
Merry Walrus 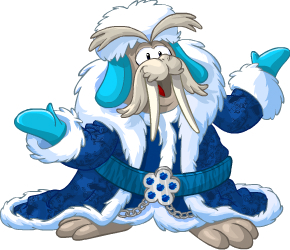 HO HO HO! Merry Walrus! It’s my name and my catchphrase!
This jolly walrus comes every year to deliver presents to all the penguins on the island. He doesn't live on the island, but on Merry Walrus Island which is protected by a barrier called the Crystal Curtain. Merry Walrus also appears in the Club Penguins stop motion animated short, We Wish you a Merry Walrus.

Characters that are from takeovers.