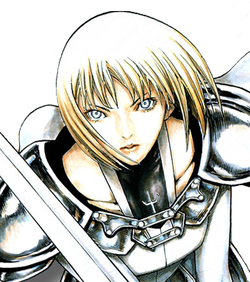 Number 47note Now former Number 47.; 150th Generation. The main protagonist of Claymore. She is the only Claymore to have taken the flesh of a fellow Claymore rather than that of a Yoma, making her 1/4 Yoma, as opposed to 1/2 like the other warriorsnote Rubel reveals this was not quite true and that other Claymores who can Half-Awaken were also only 1/4 Yoma. This was an experiment to attempt to create a stronger warrior. She was considered a failure, as she was considered weak, and was given the last rank of Number 47 in the 150th Generation. Despite this, through her own efforts and others' help, Clare gains a significant level of power throughout the story.
Voiced by: Houko Kuwashima (JP), Stephanie Young (adult) & Cherami Leigh (child) (EN) 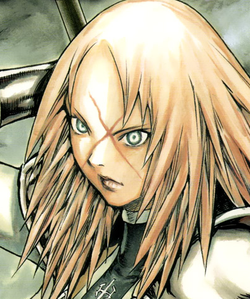 Number 6; 127th Generation. The deuteragonist of Claymore. An outstanding leader, she is capable of planning great strategies and loyal to her fellow Claymores. Her ability to move at frightening speeds, leaving after-images of herself in order to evade and confuse her opponents, earned her the title "Phantom Miria".
Voiced by: Kikuko Inoue (JP), Monica Rial (EN)
Helen 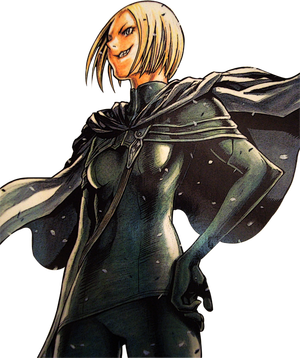 Number 22; 135th Generation. She is fourth member of the Paburo Hunt, and can stretch her arms to extreme lengths to attack at range or bind her opponents. She's hot tempered and aggressive, and status conscious, and, at first, dislikes Clare for her low rank. After surviving the Northern Campaign, she combines her limb stretching with Jean's Drill Sword technique.
Voiced by: Miki Nagasawa (JP), Jamie Marchi (EN)
Deneve 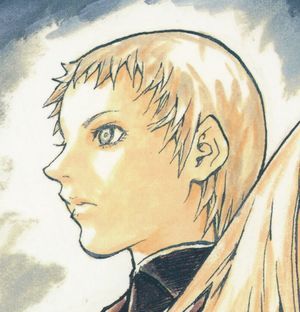 Number 15; 135th Generation. She has a calm and understanding personality. Her regeneration ability is superb, even for a defensive fighter, giving her the nickname "Regenerator Deneve". She forms a close friendship with Helen early on, and after the Paburo Hunt, bonds with Miria and Clare. After the Northern Campaign, she carries Undine's sword along with her own, giving her another moniker, "Deneve of the Twin Swords".
Voiced by: Hana Takeda (JP), Caitlin Glass (EN)
Cynthia 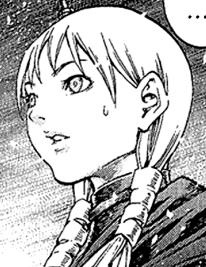 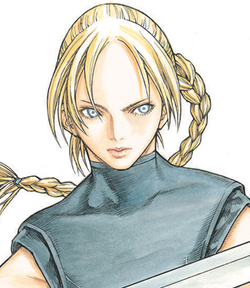 Number 31; 141st Generation. Serious-minded, she puts her loyalty to Miria first and foremost. She is a specialist in sensing Yoki, fulfilling the role of the "Eye" for the Seven Ghosts.
Voiced by: Akeno Watanabe (JP), Michele Specht (EN) 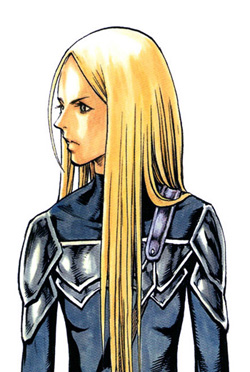 Number 40; 129th Generation. Low in self-confidence, she believes herself to be inferior to the other members of the Seven Ghosts. She is known as "Sword Thrower Yuma" for her great skill at throwing her Claymore. 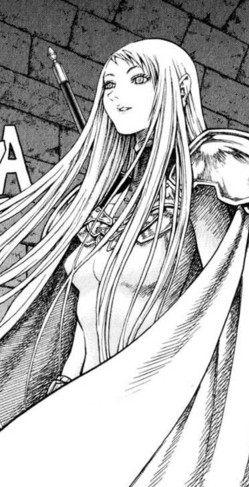 Number 3. The "Eye" of the Organization, she has a well-mannered, aristocratic demeanor, and is one of the kinder Claymores. She has earned the title "God-Eye Galatea" for her brilliant Yoki perception, allowing her to control Yoki flow in Awakened Beings and misdirect their attacks.
Voiced by: Ai Orikasa (JP), Colleen Clinkenbeard (EN)
Ophelia 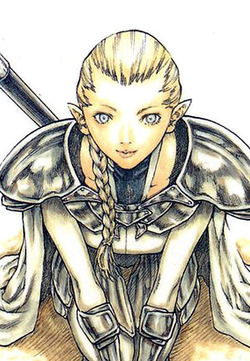 Number 4 at the beginning of the series, eventually replaced by Miata. Despite the Organization forbidding the killing of humans, Ophelia has done so. She's known as "The Blood-Soaked Warrior", but gave herself the nickname "Rippling Ophelia" for her trademark sword movement.
Voiced by: Emi Shinohara (JP), Luci Christian (EN)
Jean 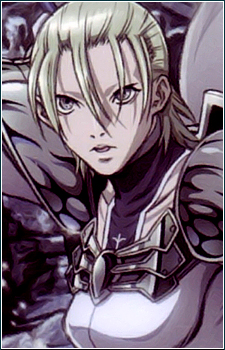 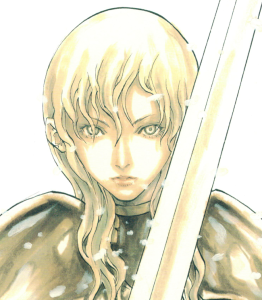 Number 8. One of the captains at Pieta.
Undine 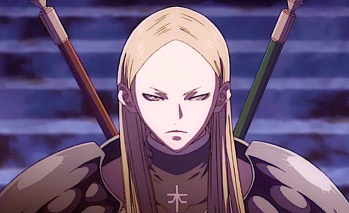 Number 11. One of the captains at Pieta.
Voiced by: Rie Ishizuka (JP), Clarine Harp (EN)
Raphaela 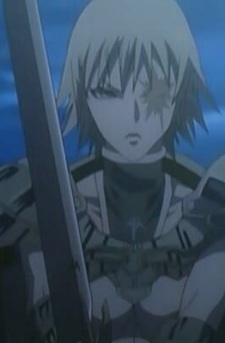 Number 5, former Number 2. Originally from a generation or two before Teresa's, made as part of an experiment to control an awakened being, eventually perfected with Alicia and Beth.
Voiced by: Satsuki Yukino (JP), Kate Oxley (EN)
Alicia and Beth 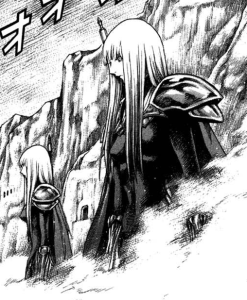 Numbers 1 and 2 in the Organization, were already ranked before their training was complete. Part of a project by the Organization to create their own, controllable Awakened Being. As such, they have one mind.