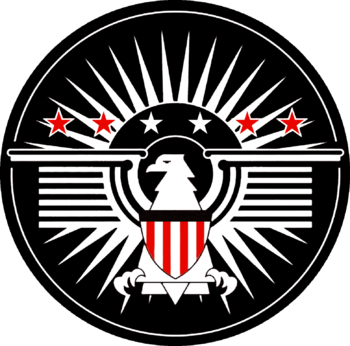 A rogue splinter division embedded within the CIA, they seek to completely overtake the agency through espionage, sabotage and assassination. As all of their members are legitimate CIA officers themselves, it's next to impossible to identify a FULCRUM operative. They seem to have a particular interest in the Intersect, being the ones behind Bryce's order to steal it - figuring it is a key to their takeover. The organization is led by the wealthy software magnate Ted Roark (ironically the only non-CIA member) and The Ring Elders. 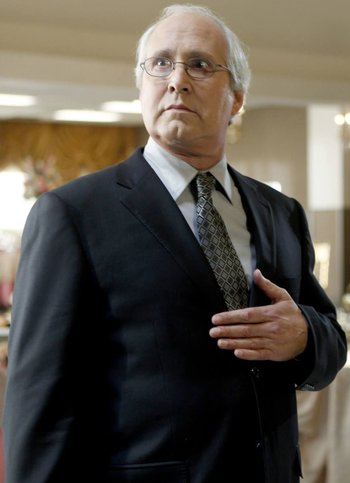 The CEO and founder of Roark Instruments, Ted Roark is secretly the head of FULCRUM and is in charge of developing FULCRUM's own intersect. He also has quite a bit of history with Stephen Bartowski: The two were former college buddies, and supposedly, Ted stole all of his best ideas. 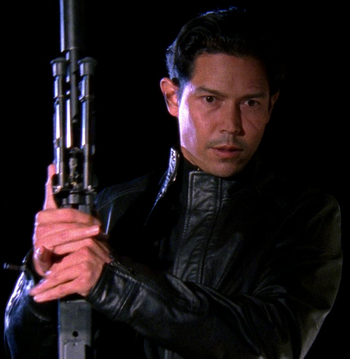 "Okay... I wouldn't want you kill some random person. I'd feel just... terrible."

Tommy is a cold and ruthless operative who attempted to use Bryce to steal the Intersect. Tommy's appearance marks the first time the viewers become aware of FULCRUM.

After Bryce's supposed death, Tommy saved him and used the Demetrios crime family to smuggle his body back into the US. The plan failed, but he was later able to deduce that Bryce was just a decoy, and that Chuck was the real Intersect. He was then captured and placed in a CIA prison. 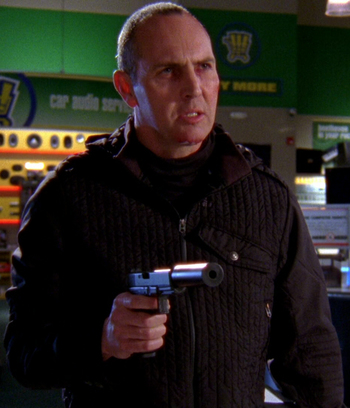 "I wish I could give you a proper reward. But, fortunately I have to shoot you."

Vincent heads FULCRUM's search for Orion, and is under direct command by the Ring Elders as well as Ted Roark. For three years, he's been looking for him to no avail - that is until Chuck finally made contact with him.

He was killed by an airstrike in "Chuck Versus the Colonel".note Not that it's stopped fans believing he ''still' managed to survive. 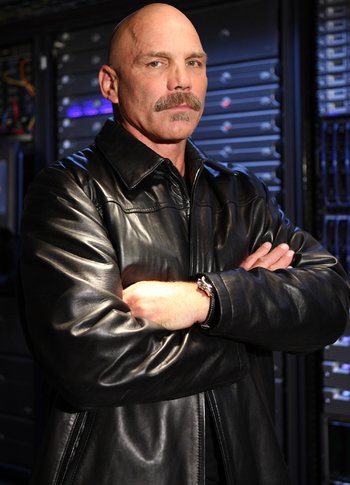 Jill's FULCRUM handler, and the organization's senior operative. Together with Jill, he concocted a scheme to infiltrate Castle to gain access to their computers and the CIA's network.

After downloading a significant amount of data, and defeating Team Bartowski, he was nearly successful if it had not been for Big Mike knocking the living shit out of him - mistaking him for a thief. 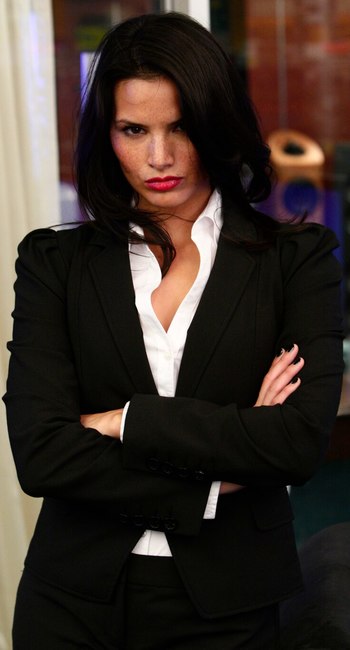 Alexis White is a FULCRUM operative who trying to recover a data chip that was taken from Brad White's body which had information about the identity of the Human Intersect.

In the past, she was a former CIA operative assigned to the Special Forces and specializes in torture and interrogation. 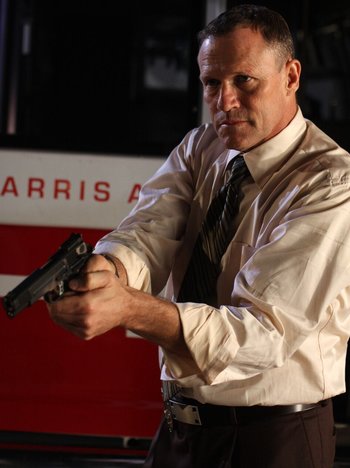 "You go right ahead, Agent Walker. Arrest me. But say "Good-bye" to Chuck."

An LAPD hostage negotiator, he is also a high-level FULCRUM operative. Together with another agent named Ned, the two orchestrated a purposefully sloppy hostage situation at the Buy More during Christmas - all so Mauser can get inside unimpeded and ascertain where the Intersect is.

Unlike other operatives, he claims he is a valuable FULCRUM asset worth saving from captivity, and so to protect Chuck he is gunned down in cold blood by Sarah. 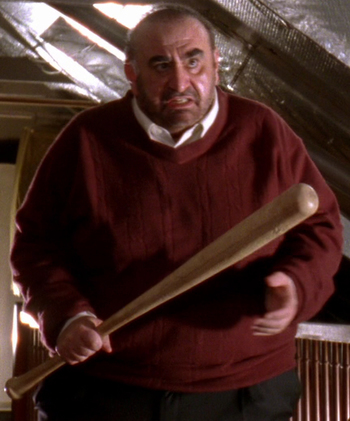 A senior FULCRUM operative, he is a good friend of Jill's father, and is suspected to be the one to have recruited Jill into FULCRUM. Due to his seniority status and clearance, he was tricked into thinking Jill and Chuck were getting married to lure him to a family party (the only time he is without his men), all to ascertain the location of where Ted Roark was holding Stephen Bartowski. After Chuck's cover was blown, he attempted to kill both of them but ended up dying of a heart attack right before the act - which may or may not have been the result of an extremely dangerous defensive stance known as "The Morgan."

In FULCRUM, his code-name is The Carnivore due to his rather impressive feat of eating a 96-ounce steak under an hour and gaining recognition for it. 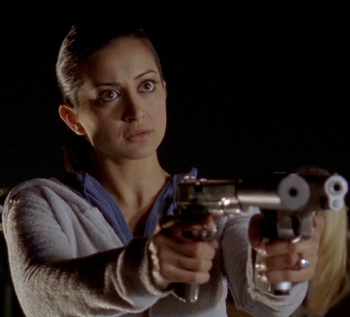 Lizzie was an undercover Fulcrum agent working as a delivery girl in the Pita Parlour restaurant near the Buy More, to investigate if the Buy More was a possible front for a CIA substation and to determine the identity of the Intersect agent. 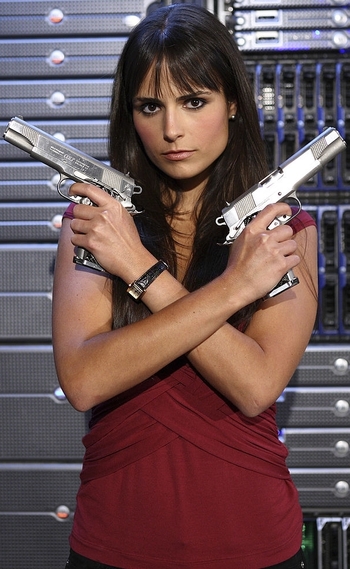 "I care about Chuck."

A scientist and epidemiologist specializing in infectious viruses. Jill is Chuck's ex-girlfriend back from his Stanford days. Right after Chuck was kicked out for "cheating", she dumped Chuck and fell for Bryce - the very guy who got him kicked out. In truth, she was by then recruited by FULCRUM and was forced to dump Chuck. Since then, there's been some bad blood between them - but at the same time, lingering traces of their love.

She was freed by Chuck in "Chuck Versus the First Kill", and is now on the run. 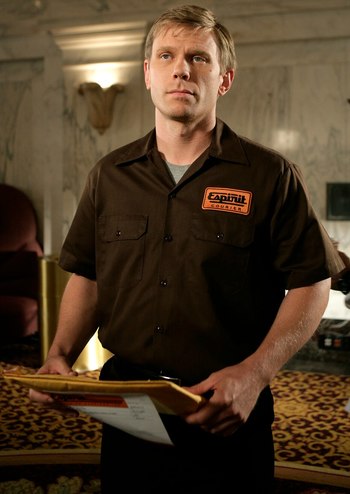 Edgar, real name is Alexander Winterborne, is an Operative who was tasked with tracking Guy LaFleur's FULCRUM blackmail roster through Chuck & Jill. He apparently had no knowledge of Jill being a FULCRUM agent, or that she was on that very blackmail file (unless they were secretly working together to destroy the file). After destroying the USB drive with the file (not knowing Chuck made a backup), he fled and was never found.

He later reappeared in Season 5 as a known associate of Nicholas Quinn, following FULCRUM's dissolution. He was in the middle of a transaction for the Intersect Key with Quinn when Sarah ambushed the deal aboard Edgar's private jet. After a short scuffle, he presumably escaped after Quinn stole a part of the Intersect key. 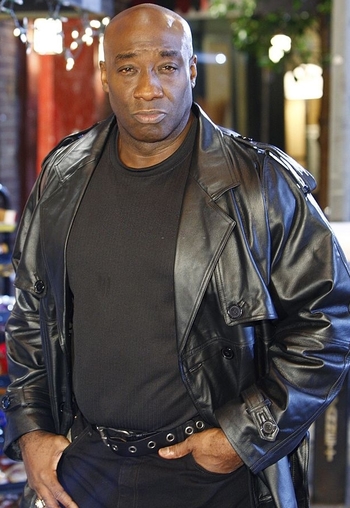 "I assume you find me imposing. Don't worry, you can be honest. I'm going for imposing."

Leader of a mercenary company that's frequently hired out by FULCRUM. His latest job is to locate and steal the Cypher, an integral part of the new Intersect. Unfortunately, he's up against the greatest spy the CIA has: Carmichael. Charles Carmichael.