The leader of the Flashmen. The only Flashman captured at the age of 3 (the rest are still younger), thus making him the big brother figure to the team. Trained in science at the deserts of Flash Star. 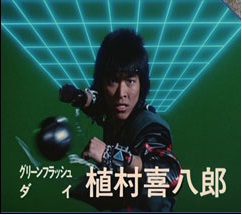 The second-in-command. Trained in strength in the rocky Green Star.

The youngest of the team. Trained in speed and survival in the desert Blue Star.

The cold, distant smart girl who's really nice. The only one we see find her family. Trained in sharp mind at the icy Yellow Star... which probably goes along with her usual cold front.

The Action Girl of the team. Trains in jumping ability in the gravity planet of Pink Star.