Characters / Charlie and the Chocolate Factory: Other Adult Characters

So how does Willy Wonka's factory produce sweets when no one is seen entering or leaving it? Well, during the time his factory was closed, he discovered a tribe of doll-sized people in faraway Loompaland, a Death World of carnivorous beasts. When he learned that the Oompa-Loompas loved cacao beans (the basis of chocolate), he offered them jobs in his factory with payment in the form of said beans, and they all took him up on it. The loyal little workers are fond of making music and singing, and serve as a Greek Chorus as the Golden Ticket finders tour the factory.

In the books and most adaptations 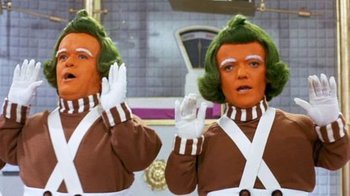 "Oompa-Loompa, doopity-do, I've got a perfect puzzle for you..." 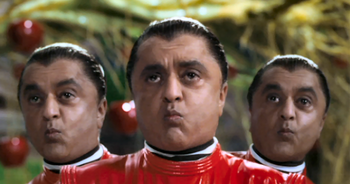 An Indian prince who asked Willy Wonka to build a palace for him entirely out of chocolate. Wonka did as he asked and advised him to eat as soon as possible before it melted. The prince refused, saying he intended to live in it. As Wonka warned, the palace did melt.

The owner of a candy shop in Charlie's town, and the one who ends up selling him the candy bar with the Golden Ticket inside.