One of the two ranged classes in the game, the Archer class represents all the bow-using Arcana of Yggdra. Compared to Wizards, Archers focus on debuffs with their Specials, and their specials are either single-target, or hit a random number of targets.

Book 2 adds the Gunner subclass, who instead of bows use guns instead. Compared to Archers, Gunners have a higher number of attacks per turn, but in return they have a longer cooldown in between attacks.

Go here to go back to the main character index of Chain Chronicle.

Tropes common to Archers and Gunners:

Once I've set my sights...there's no escape. 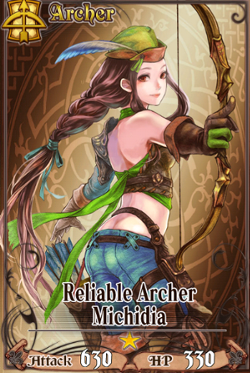 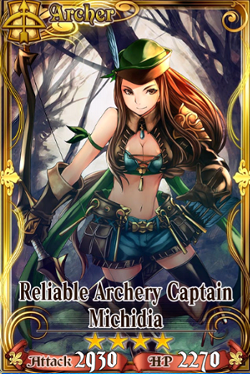 to see her 4-star Arcana version

A former member of the Ranger's Guild, Michidia enlisted with the Volunteer Army because she figured it was the quickest way to achieve peace, at least in the Holy Kingdom anyway. Mostly calm and even-tempered, very few things get to her — unless your name happens to be Kain, that is. 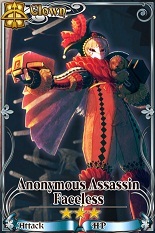 A mute Assassin's Guild member dressed like a clown. As no one have seen Faceless' true face, not much was known about this character. And we're not kidding about the 'mute' part; while the usual unit introduction has them saying a sentence or two, Faceless doesn't even say anything.

Received an upgrade in the JP server that is currently unreleased in Global. 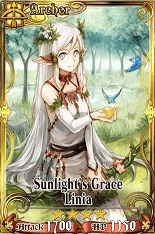 A peace-loving forest sprite from the Golden Fruit tribe of the Soul Island. Rather than fighting, she prefers to attend the local forest and its wildlife. 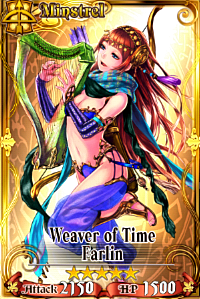 The Weaver of Time.

A wandering singer with a following that goes beyond the Lake of Sand, Farlin joins the Volunteer Army at Queen Ashrina's behest, as she is looking for inspiration for a new paean she's writing. 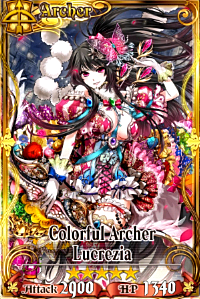 An ex-member of the Assassin's Guild, Lucrezia is known more these days for her prowess at the bow, and the very VERY colorful outfit she's wearing. She likes the colors a lot, thank you very much. 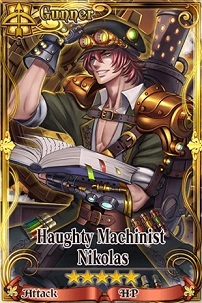 A genius alchemist hailing from a faraway continent. He's very passionate about what he does, but acts condescending to everyone who did not acknowledge his talent...and sometimes even to people who does.

A Global exclusive arcana only available with Fortune Rings. 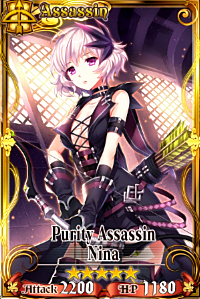 "Target confirmed..."
A natural-born assassin, raised by the guild from a young age. This has taught her to only rarely show emotion, but focus on faithfulness to her teachings. Now that she’s lost her original master, she takes on various jobs while searching for another. 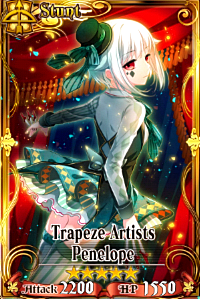 A member of the Assassin's Guild, Penelope is usually seen however performing as part of the trapeze act of the Youbee circus. She doesn't talk much. 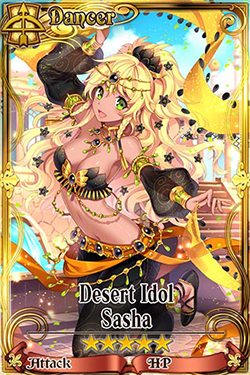 A popular dancer from an entertainment troupe traveling the desert. Her ever-smiling face is beloved by all. She acts as older sister to the children in the troupe. Guileless and good-natured, there are times she wishes she could be a little selfish.