The former of the title brothers. Cat is the smarter and more sophisticated of the pair, often coming up with hare-brained get-rich-quick schemes and being literally dragged around by his dimwit brother. 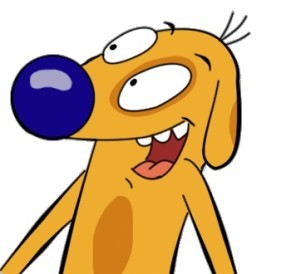 The other end of the eponymous conjoined brothers. Dog is a happy-go-lucky dimwit who loves food and chasing vehicles, often to the frustration of Cat.

A blue, Brooklyn-accented mouse who lives in the walls of CatDog's home. He's usually on pretty good terms with his neighbours, but has been known to take enjoyment in tormenting them from time to time. 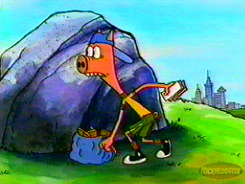 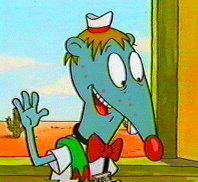 A pig and a weasel who are among CatDog's few friends. 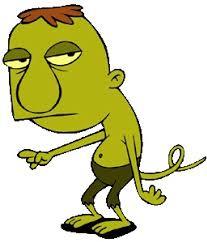 A green-skinned humanoid of unclear species usually seen working various odd jobs. Despite his name, he is anything but sunshine. 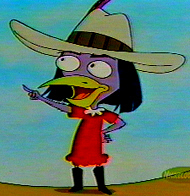 Voiced by: Nika Futterman (credited as "Nika Frost" until "The Great Parent Mystery")

A "yellow-bellied whippoorwill" with a Hispanic accent. She's a zoologist who first showed up to study CatDog, but soon became one of their closest friends.

A suave and trendy feline and a local celebrity in Nearburg.

A pair of female cats who have dated CatDog a few times. 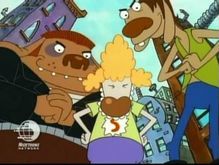 The archenemies of CatDog. A trio of thuggish mutts who hate cats and beat up any they meet. The gang consists of the brutish leader Cliff; the astoundingly moronic Lube; and the diminutive Shriek, who is the sole girl of the group.

A large green rabbit who antagonizes CatDog just as often as the Greasers do. Somewhere between the mayor and the CEO of Nearburg, he seems to have managerial-level positions in virtually every business in the city.

A mangy little squirrel with a bad attitude who idolizes the Greasers and seeks to join their gang.

A feline actress whom Cat has an enormous crush on.

"The Mailman"
Voiced by: Dave Thomas

A fast-moving lizard who works in postal delivery.

CatDog's (adoptive) parents, whom the pair set out to find in The Movie "CatDog and the Great Parent Mystery".