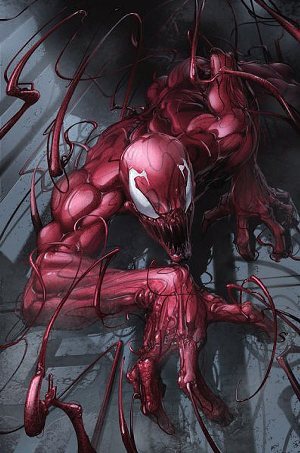 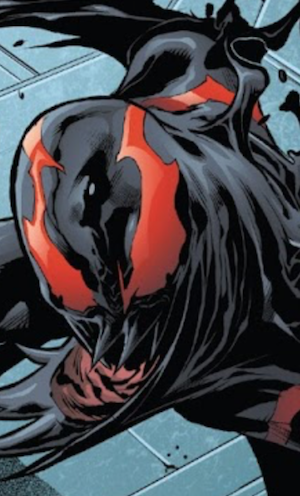 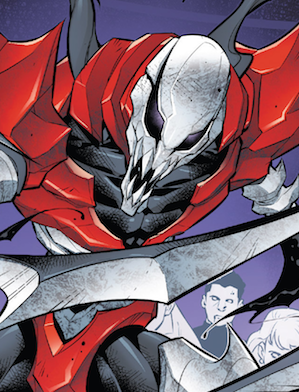 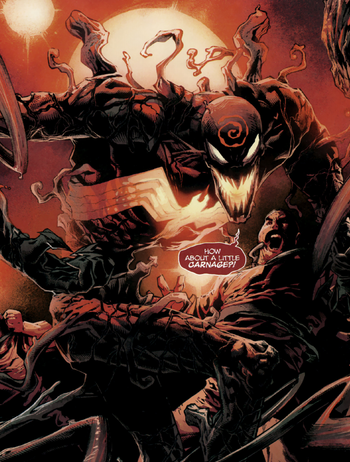 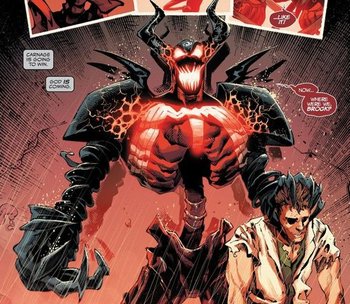 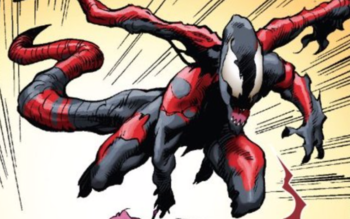 A sociopathic serial killer imprisoned for eleven consecutive life sentences, Cletus Kasady met Eddie Brock when the latter, separated from the Venom symbiote by the toxic touch of the supervillain Styx, became his cellmate. Learning of Brock's grudge against Spider-Man, Kasady tried to convert him to his nihilistic philosophy, mocking Eddie over his claims to have once been the supervillain Venom. Repeatedly rebuked, Kasady decided to murder his cellmate, but before he could the Venom symbiote entered the cell and rebonded to Eddie. Venom broke free, leaving behind a newly birthed spawn and a terrified and jealous Kasady. Sensing his desire for the power Eddie possessed, the spawn of the Venom symbiote dripped onto Cletus' hand and bonded with him, transforming him into the monstrous Carnage. As Carnage, Kasady proved stronger than Spider-Man and Venom combined, and his symbiote was not only less susceptible to sonics than its progenitor but infinitely more difficult to remove, having bonded to his bloodstream. In his first appearance, Carnage forced Spider-Man and Venom to call a temporary truce to defeat him. Years later Cletus would lose his symbiote in a conflict with the FBI's anti-symbiote task force.

When the Poisons invaded Earth-616, they sent a strike team to retrieve Cletus and offered him the chance to become Carnage again if he allied with them. Thinking they would reunite him with his beloved symbiote, Cletus accepted... but was instead bonded to a new symbiote, causing him excruciating pain as it came into conflict with the remnants of his original symbiote. Furious over having been tricked and tortured, Cletus rampaged — intent on escaping and reuniting with his original symbiote — but was quickly ambushed by an unbound Poison, which consumed him to become Poison Carnage. However, Cletus' bloodlust let his psyche mostly-withstand being consumed, and he faked loyalty to the Hive — ultimately being tossed into space by Venom. However, his body floated through the emptiness of space and returned to Earth — shattering the Poison and restoring his human form in the process. The Carnage symbiote sacrificed itself to protect Cletus as they reentered Earth's atmosphere, but Cletus died upon landing.

Cletus' body was spirited away by the authorities, only to be grabbed by an apocalyptic cult who saw him as the key to contacting and awakening the symbiote god Knull. Thanks to a piece of the ancient Grendel symbiote they had stolen from the Maker, Cletus was reanimated and transformed into Dark Carnage by devouring Scorn's "codex" — trace remnants of symbiote left in hosts' bodies. Wanting more of the experience he'd had, he was told that if he absorbed more "codexes" from other previous symbiote holders, he could even resurrect Knull.