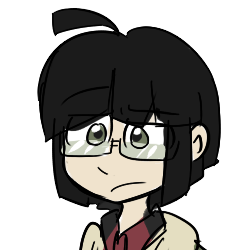 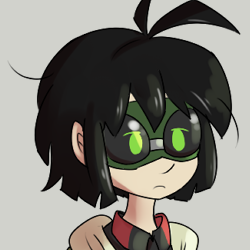 to see her with goggles

An antisocial computer university dropout turned vagabond and petty thief. She was inducted into the Cardians after a run-in with Sophie the genie and the Hedge. She spends most of her days alone in research or generally snarking at other people on the boat. Quick witted and sharp with a knack for fictional storytelling, her knowledge in the occult and her ability to see through Fae Glamour are her main assets. Just don’t ask her to promise anything. 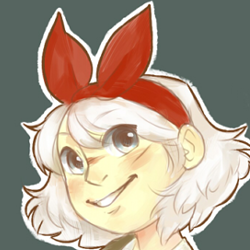 A tiny and adorable Finnish teenager who travels the world. She has a hoarding problem which compels her to cling onto any and every item that comes her way, though with time she’s slowly learning to cope with it. She has trouble understanding metaphor and sarcasm, and is the innocent apple of everyone’s eye. She also happens to be the team gunslinger, medic and weapons forger, with a slightly disturbing fascination with the colour red. The original Saara died from a gunshot and got switched to a living one from an alternative universe. 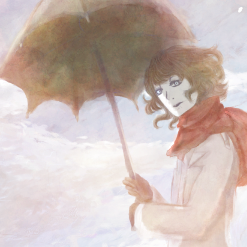 "My mother would always tell me that you have to treat everyone with kindness, or the world will never be a better place."

Until recently, Richter was an aspiring Yale student with a strained relationship with his father. That was until he found out that his ‘dad’ was a Fetch all along. Richter is a charitable and kind young man, always looking after the younger members on-board as the ‘team mum’. He’s been put through a lot of stress lately, though, and anybody who harms his loved ones is in for a taste of the wrath he hides within. It looks like his family has a darker past than he imagined, for his grandfather long had business ties to Cheiron and the Agnus Dei. 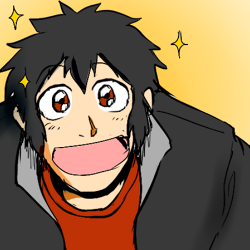 Otherwise an ordinary high school student, he and his best friend Tetsuo ended up in the Cardians after a ferry trip gone wrong. He may not be the brightest on-board, but he knows how to use his fists. He aspires to ‘be a shield’, to protect the people he cares about. Though arguably his greatest skills are his unwavering determination, fighting spirit, and the ability to befriend almost anybody with his simple but gently charisma. 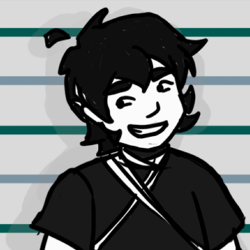 The team’s resident martial arts expert and one of the primary melee combatants on board. He strives to do whatever he can to defend his fellow teammates (or ‘best friends!’ as he calls them). Although originally appearing to be one of the more normal members of the team, his lust for battle, excitement over getting brutally injured, and warped way of thinking have confused and troubled his teammates to no end, as well as landed him with two curses. 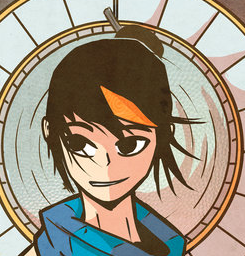 A Girl Scout and wanderer who ran away from home and ended up liberating a small Australian town from a demon lord, there is seemingly no end to Jo’s tricks and traps. Accompanied by a dingo spirit, she has deadly aim, a knack for manipulating others to get what she wants, and an opportunist attitude. She’s headstrong, but sometimes her plans land the team in a multitude of crazy situations. She, Jimmy and Amir are now cursed with a sacrificial demon pact with Lucifer. She and Dao are long lost siblings. 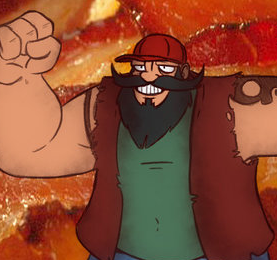 On the outside, Wilbur is your average gruff, buff, tough, wrong-side-of-the-tracks biker. On the inside, he’s exactly that. But he’s also a family man who will fiercely defend his children and comrades. He supplements his good old fisticuffs with his knowledge of mechanics and engineering. He’s also known board for his love of beer, bacon, his unstoppable rage if you get on his bad side... and his love for little Saara. 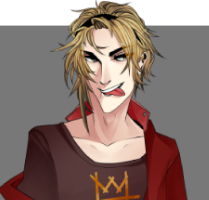 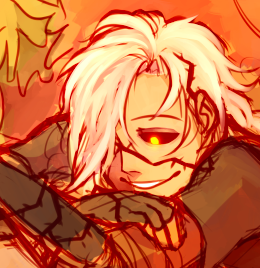 to see him as a Changeling

"Got tongue-tied by my beauty?"

Once a gang member, Dao was thrown into the Cardians after a traumatic experience involving finding his mother dead, and the dreaded Hook. His main skills on the team were his sharp-shooting and his striking looks… that is, until he made a deal with a Fae to save Richter’s parents, sacrificing himself in the process. Now a Changeling, he’s was stuck in Arcadia under servitude of his Keeper, the Game Master Fae. The Changeling has forgotten everything about the boat and is beginning a slow recovery after being rescued by the team. He and Jo are long lost siblings. 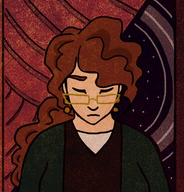 "Every function of an living organism must serve a purpose. Otherwise it would be just a waste of energy."

A straightforward and no-nonsense psychologist from Finland. She had a stable life and job, but went abroad for some excitement- a decision which eventually landed her with the Cardians. She’s logical-minded and intelligent, but prefers mundane solutions and answers to supernatural ones and often ignores the latter for the former. Though she has a good memory, she’s terrible at reacting to new situations partly due to a chronic learning disability. 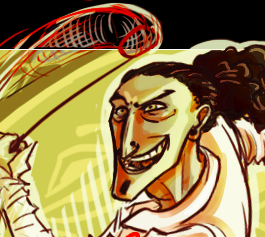 "...Ya know what? I said plenty. Way more than ya earn. I need to get stuff done. Actually make stuff happen."

Emil used to make a living from being a shady, streetwise medical equipment dealer. Now he’s a shady, streetwise Cardian. He collects butterflies, is a surprisingly good artist, and is often the designated team driver, but he’s still a sleazy trickster with a penchant for pranks and mischief. He does care for the people he’s close to, however, particularly his brother Julian who went missing long ago, at least, until he finds his journal.

"Never waste a good can of beer."

The laid-back, booze-drinking Ace of Clubs. Emma does what she wants, when she wants, and that something usually involves lazing about and/or throwing unwitting people overboard. When push comes to shove though, she will stand by her team members and will take on her responsibilities properly.

" 7 Demon Kings of Hell, I will prolong my punishment. Just let them go."

An attractive Indian gentleman and the resident Ace of Hearts. He is a medium, a mortal with the ability to commune with and channel spirits. He has several ties to Hell, due to a summoning ritual gone wrong in his youth. He is protective of his team, and strives to improve their skills and relationships. He’s also got a pretty nice closet.

A recently promoted Ace to replace Norah Darceleigh, Darwin is an exorcist with workaholic tendencies and pitiful social skills. He can summon protective sigils and charms against ghosts and ephemeral beings, and carries around a spray bottle of holy water for use against demons (and Amir).

"...I can't let something like this ever happen again."

Perhaps the most badass grandmother to ever set foot on the ship. Ai’s grandmother, a master of forging weapons, and Emma’s trainer/master. Currently teaches Saara how to forge weapons, a skill she learnt back in the 1500’s.

"Back when I was still a freshling under the Cardians, all I evver felt was hatred. Hatred towards the supernaturals for what they have done to me. Now that I am here, I do and don't regret being a member here. All I can do now is fulfill Perry's vision...which is to make a difference despite the harsh reputation this organization has."

The Ace of Spades, and the de facto leader of the entire division. She acts like a mother to Perry, though has a strained relationship with her biological son Orphie. She’s usually intelligent and composed, but when angered her rage hits like a typhoon. Well technically, it’s two shotguns. Don’t anger Norah. She eventually retired to a different division along with her family and Perry.

"I really like it here. This is my second home where Norah-Ma took me in and my friends. I know I fucked up a lot, and that caused a lot of casualties but....this is the only family that accepted me, cared for me, and nurtured me into what I am today. I promise you, this Division will start a change for the Cardian's reputation."

A young Mage who was taken in by the Cardians when he was barely a teenager. He’s soft-spoken, shy, and nervous, but he means the best for everyone and loves Norah very much. He is also one of Richter’s university colleagues. Along with the Darceleighs, Perry eventually moved onto a different division. 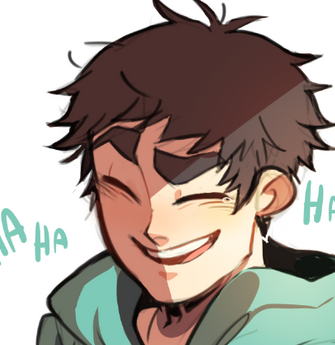 "You're my best friend, the bestest friend i've ever had and probably ever will. I actually wished i had told you sooner about this, maybe it wouldn't have gotten this messy if i did.. Sorry.. I should've trusted you more. I think.. I knew what the light is."

Yusuke’s childhood friend, troubled by ghost possessions and overwhelming emotions. He came onto the Cardians boat with Yusuke when the Australia-bound boat got lost and got attacked by zombies, led by Kiyoko. Kiyoko has since possessed Tetsuo, and Tetsuo has been trying to fight her influence.

Mako's father. He was a quirky eccentric up until he fell into a mysterious coma years before Mako joined the Cardians. When Mako manages to finally contact him via dreams, it is revealed that Alfred had been a Changeling since childhood, and that Mako herself is a human-changeling hybrid. He is currently kept under the servitude of a Fae.

Saara's older brother. He is an adventurous, nature enthusiast, completely embracing plants while rejecting modern technology. When Saara fails to show up at their meeting place after she had joined the Cardians, he spends much of his time trying to look for her. He manages to reunite with her for her birthday before returning. He and the rest of Saara's family are currently under the protection of the Cardians.

"I am your real father Richter. He stole all the time away from me."

Richter's distant father. When Richter was 10, he was kidnapped by a Fae and subsequently replaced by a Fetch and turned into a Draconic Changeling. He eventually ended up in the servitude of the Game Master Fae until he was released through Dao's deal with the Game Master Fae. He has joined the Cardians as a Changeling who is unable to go home, and has revealed to Richter the true nature of the Alkahest Corporation, one that he wished to prevent Richter from inheriting for his protection. He also hints at Fetch Dao's true nature as a Fetch.

Richter's beloved mother. A year prior to Richter joining the Cardians, she fell ill with leukemia, forcing her to retire. She was later kidnapped by the Game Master Fae as a bargaining chip for her husband, Valerian. She remained in the Game Master Fae's servitude as her songstress until she was released through Dao's deal with the Game Master Fae. After some time of recovery, she was allowed to return home, giving Richter her lily pin.

Wilbur's beloved biological daughter. She was kidnapped and experimented on by Cheiron, and was infused with the Tree Curse. She was eventually rescued and cured, and in order to protect her, Wilbur chose to have her memories of the incident erased, and joined the Cardians.