Given Camera Cafe is set in an unnamed, yet large business company, it's obvious there are many workers lurking inside it, and that's not even counting the one-time characters played by guest stars.

As with the main article, this refers to (as of now) the Italian version of this Canadian/French format. Let's rock.

Luca and Paolo, the lead characters of the sitcom: an Odd Couple of Unsympathetic Comedy Protagonists that have a different Zany Scheme for almost every episode. 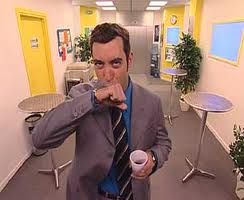 The Unsympathetic Comedy Protagonist of the show alongside Luca, Paolo is the best salesman in the company. Nevertheless he's proud to be an alcoholic, other than a sleazy, borderline illiterate buffoon who doesn't have many interests outside hookers, campers, Alfa Romeos and the like. However, his overall simple-mindedness is a foil to the way he treats his Butt-Monkey co-workers.

"Now that will piss our bosses off!" 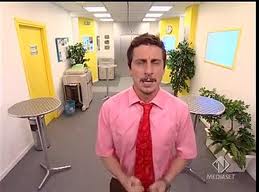 The other Unsympathetic Comedy Protagonist, Luca is the leader of the company's trade union and, as such, he's in charge of the organization of strikes. He's proud to be a Communist, but he doesn't quite stick to the ideals implied by that.

Despite being a greedy jerk , he also has some redeeming abilities — namely, he's generally smarter and more classy than Paolo, though every time the two have a plan, it's likely to backfire. His flaws are somewhat punished by the... er, unfaithfulness shown by his girlfriend. Karma's a bitch, indeed. 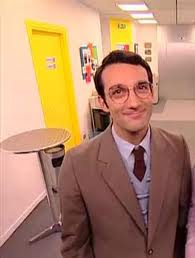 The company's nerdy and goofy accountant and the show's resident Butt-Monkey. Very shy, he's not able to overcome the others' bossy attitudes unless someone's screwing with his personal hobbies he loves the most.

Other than being a hopeless Momma's Boy and a goody-goody know-it-all, Silvano is also known for his semi-relationship with the ugliest woman in the company (Patti), another reason for being made fun of. 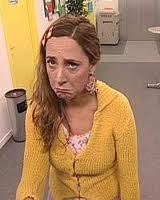 Simply known as "Cesso" (Toilet), Patti is the flat-out ugliest one in the company. She's still a maiden despite her age in a platonic relationship with Silvano.

Eager to work and kind to everyone, despite waiting for the right person to lose her virginity with (Silvano), she's actually willing to settle with pretty much anyone else.

As of season 5, she's pregnant with Silvano being the father. As of season 6, she's Put on a Bus, but is still mentioned by Silvano, now her husband. 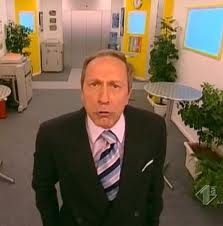 The director in charge of the company as a whole. Highly conservative and, although not explicitly, rightist, he doesn't think about Luca as an actual "menace".

Despite he's far from being a Big Bad, he's still a despicable character, given the bossy way he acts towards the workers. This, unless there's someone somewhat "stronger" than him. The overweight, nerdy computer expert. Single father with a little kid, Olmo is pretty lazy and an easygoing person. Not without his quirks but still one of the closest characters to be the Only Sane Man. 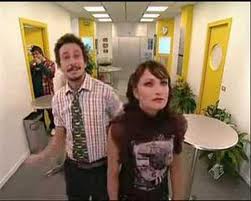 Alex is Luca's so-called, self-appointed girlfriend. A relatively minor character in the show, this secretary has actually slept with pretty much everyone in the company. She's also a stoner, and none of her brothers has an honest life in any way. 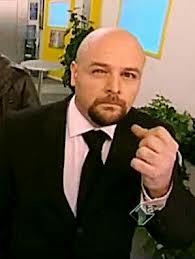 Andrea is Mr. De Marinis' personal driver, and he's pretty much exactly as violent as the stereotypical bodyguard he looks like: he delivers a No-Holds-Barred Beatdown almost every single time he's featured in a sketch. 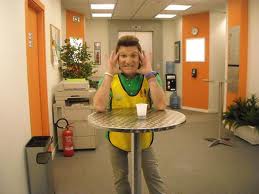 The homosexual office boy. Luca and Paolo's favorite Butt-Monkey when Silvano isn't around. A very common Running Gag is someone (usually Paolo) ordering Pippo to go to the bathroom, to get rid of him. 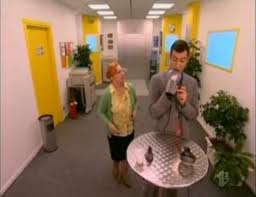 A naive, submissive elderly woman, usually abused and mistreated by everyone.

"Ah, if it isn't that little comunist bastard with his tall, brainless pal!" The psychotic, neurotic, lunatic guard who's always threatening people with his gun.

"A long time ago, in an ancient region named Gu..." 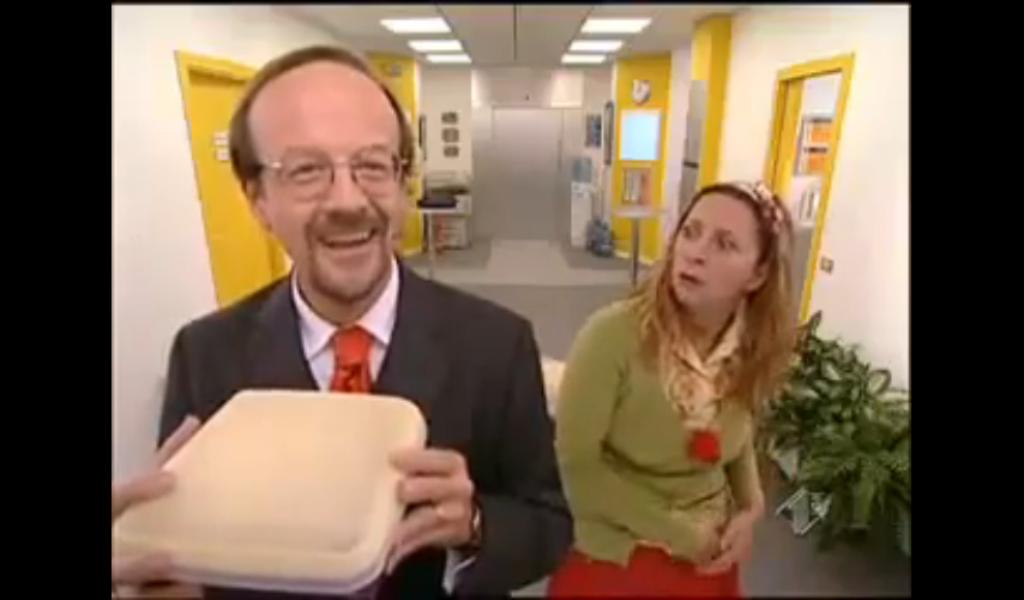 One of the few moments you'll see this man laughing, although in this case it doesn't match the situation, nor it is good to hear. Patti, we share your pain.
Played by Roberto Accornero

A post-merger character, the most important and the most feared. Everyone fears him, including De Marinis. He's the tall, serious, composed man who's always carrying that small red notebook.

Being the responsible of human resources, he can examine workers' every single movement...and write their name in the notebook whenever he decides they do something wrong or stupid. And it happens. Always. 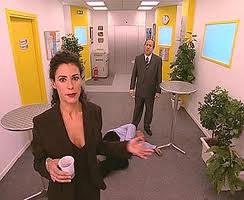 The second most important person in the company, next to De Marinis, Ilaria is the strict Marketing director. While powerful and respected, she has basically no life outside the workplace and is considered by everyone a bitter middle-aged woman. 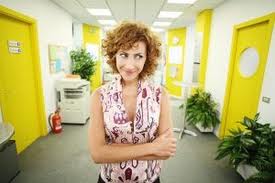 Vice Marketing Manager of the company, Gaia is a smart, beautiful, rich, successful woman whose eternal competition with Ilaria is well known by everyone. Unlike Ilaria, she's liked by everyone, especially the guys; much to her dismay she's the main object of Paolo's desire. 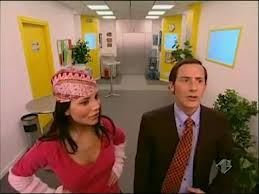 Giovanna (on the left)
Played by Giovanna Rei.

The young, sexy switchboard operator. Unambitious and not career oriented, Giovanna is your typical pretty and friendly girl, but still able to use her natural beauty to her advantage, whenever she needs something. An unlucky, not very bright secretary. After being dumped by her abusive husband, she's now a single mother with two little kids, always struggling with money and looking for a man. The athletic yet elegant British manager. The only foreigner out of the regular characters.

The new secretary arrived in season 3 after Anna's departure. Luca seems to have a bit of crush on her but she isn't fond of him at all. Introduced in season 4, Maria Eleonora is an extremely cultured and competent young woman, object of Luca's unrequited affections. She's a nice, likable person but at the same time overly obsessive and neurotic and a bit of a perfectionist. Carminati (and his team).
Played by Fabrizio Careddu.

The main Digitex salesman and Paolo's rival and worst enemy. He's the most famous member of "Team Carminati" and strongly believes in the importance of the group work, thanks to the theories of Tom Weil, a fictional philosopher idolized by him and his co-workers. A young, attractive girl who works in the company's nursery. She hates her job and always looks aloof and annoyed with everyone. 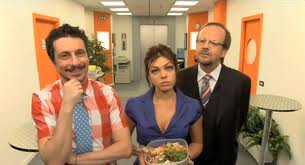 From left to right: Luca, Gloria and Geller.
Played by Desy Luccini.

She is the beautiful yet extremely dim-witted new secretary of the company. 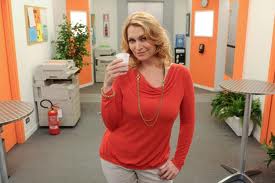 A new manager of the company who has an obsessive crush on Paolo.

An attractive and competent woman who is the new manager.

A disabled and cynical employee who hates everyone.

A sassy and good-looking girl who is frequently hit on by Paolo.

An immigrant who works for Luca.

The new secretary for De Marinis.

A shy, awkward Butt-Monkey who has stuttering problems. Basically another Silvano with a speech impediment. (seasons 2-3)

A new employee with a little experience, who (unlike the other people) worships Paolo. His main goal is trying to be like him in every way. Paolo, on the other hand, considers him just an annoyance. (season 3)

A Digitex (the rival company) employee who hates Luca and Paolo with a passion. (season 3)

A short-lived character on the sitcom and a total nutcase. (season 3)

Paolo's wife, just as "faithful" to her husband as he is to her. Possibly the most well known unseen character.

Paolo's youngest son. "The shortest serial killer in the world" according to his proud father.

Paolo's infamous best friends (other than Luca of course), just as uncultured and thoughtless as him and known for their criminal habits.

A friend of Silvano and his mom. She's their old next door neighbor, and they play Scrabble together every week.