The Order of Aurelius

In General
The Order of Aurelius is a vampire cult and bloodline that considers itself the elite of vampires.
The Anointed One

Collin, The Anointed One

A vampire member of the Order of Aurelius and a key servant of the Master. Even though he was a child, it was foretold he would lead Buffy Summers to hell. 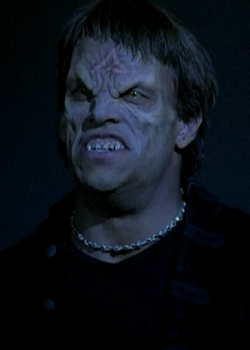 Appears In: "Welcome to the Hellmouth"/"The Harvest"

A vampire, a member of the Order of Aurelius and the leading acolyte of The Master during the Harvest in 1997.

A trio of powerful vampire warriors and members of the Order of Aurelius. They were summoned by The Master to hunt down the Slayer.

A vampire and a member of the Order of Aurelius. 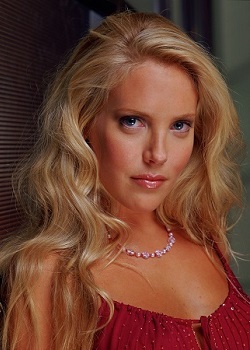 "Part of me always knew life would end after high school."

A member of Cordelia's high-school posse, Harmony is turned into a vampire after graduation. Upon moving to LA, she seeks out Cordelia once more, but her vampire instincts means it's not long before she tries to kill Cordelia and the rest of the Angel Investigations crew. At some point after this, she gets a job at Wolfram & Hart, and when Angel takes over the firm, she's picked as his secretary. She's still evil, but thankfully, she's very bad at it. 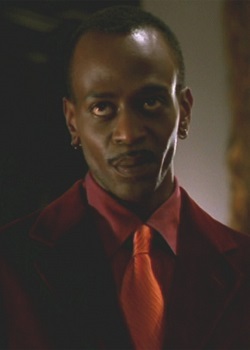 "There's a reason these vengeance crusades are out of style. See, the modern vampire, we see the big picture."

"Sunnydale. Town's got quaint, and the people! He called me "sir", don't you just miss that? I mean, admittedly, it's not a haven for the brothers. You know, strictly the Caucasian persuasion here in the 'Dale. But you know, you just gotta stand up and salute that death rate. I ran a statistical analysis and, hello darkness! Makes D.C. look like Mayberry."

Tech-savvy vampire from early Season 3. Aided the Mayor before being killed and replaced by Faith.

A female vampire sired in 1999 by the Wishverse counterpart of Willow Rosenberg.

Appears In: "Welcome to the Hellmouth"/"The Harvest"

Introduced in the very first episode as Xander and Willow's closest friend, he ends up getting killed, turned into a vampire, and then accidentally staked by Xander in very short order. His old friends proceed to honor his memory by — forgetting he ever existed, apparently, as he's never mentioned even once throughout the rest of the show. 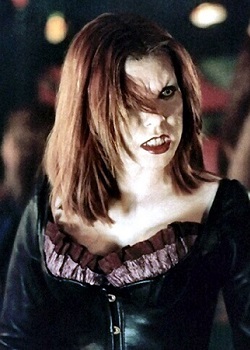 "In my world, there are people in chains and we can ride them like ponies."

In the Wishverse, Willow Rosenberg was at some point turned into a vampire. After the apparent deaths of Luke and Darla, she became one of the most powerful and feared members of the Order of Aurelius and, alongside her lover Xander, one of the leading acolytes of The Master.

A vampire minion of Sunday who in life had been a UC Sunnydale student. 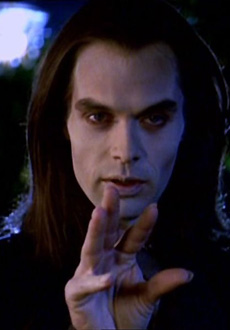 Appears in: "Buffy vs. Dracula"

Dracula. Does more need to be said?

Actually, for this version, it does. He is evil (kind of), politically incorrect and extremely powerful, having far more powers than a normal vampire. He is also best friends with Xander, and was taught how to ride a motorbike by him. Nobody really understands this relationship, and most are really confused by it - including Xander. He's also not exactly well-liked among his own kind, as it was he who gave Bram Stoker the inspiration for the book bearing his name, which first put vampires in the public eye (even though still fictional). As Spike puts it, they consider him a "sell out". Also his vampirism is different from the usual vamps of the series. 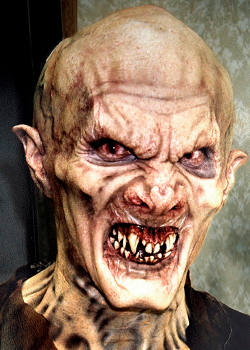 "As Neanderthals are to human beings, the Turok-Han are to vampires. They're primordial, ferociously powerful killing machine, as single-minded as animals. They are the vampires that vampires fear. An ancient and entirely different race. And until this morning, I thought they were a myth."
— Rupert Giles

An ancient and powerful breed of vampire. 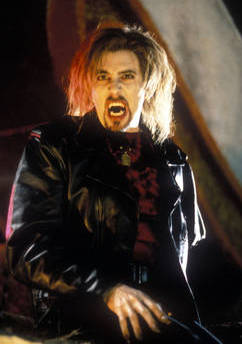 One of Lothos's minions. Since he appears in the movie and origin comic, he isn't the most famous vampire in the bunch.

Appears In: "Never Kill a Boy on the First Date"

A student of Sunnyvale High and a major delinquent.

Buffy's friend from her old school.

A Sunnydale High student and later a vampire. 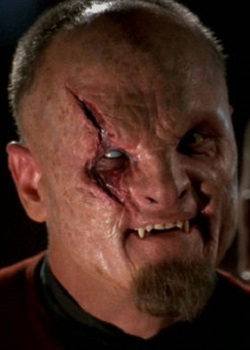 "I want the blood of the Slayer."

Appears In: "Faith, Hope, and Trick"

Leader of the El Eliminati, an cult of dueling vampires that served the demon Balthazar.

A vampire minion of Mayor Richard Wilkins and a former minion of Spike. Lenny was more brutal than Spike, even looking down on his old boss for being "soft." Lenny was however somewhat rational, giving Angel and Buffy the chance to leave the fight, thus helping his own side's odds, and not saying who he now worked for.

Appears In: "The Wish"

"Someone has to talk to her people. That name is striking fear in nobody's hearts."

Xander's doppelgänger from an alternate universe in which Buffy never moved to Sunnydale. With no one around to prevent the Master's return, the town was taken over by vampires, with Xander and Willow serving proudly as the Master's top lieutenants. Vampire Xander is killed by Wishverse Buffy. 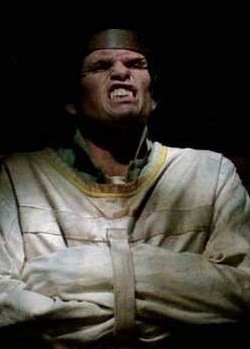 "I have a problem with mothers. I'm aware of that."

"It's a game, you know. We're not going to play by their rules, but that doesn't mean we're not gonna play."

Zachary Kralik was a serial killer who had been turned into a vampire.

The leader of a group of vampires sent by Mayor Wilkins to kill Willow Rosenberg. However, Alphonse and his men ran into Willow's vampire counterpart and attacked her by mistake instead. After being defeated, the Vamp Willow interrogated Alphonse and brought him and his men into her service. 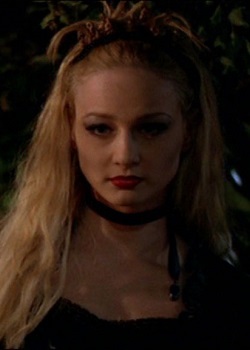 "I'm Sunday. I'll be killing you here in a minute or so."

Appears In: "The Freshman"

"I must say, you've really got me now. I mean, this is a diabolical plan. Throw yourself at my feet with a broken arm and no weapons of any kind, how am I gonna get out of this one?"

A vampire who had been a UC Sunnydale student. She was also the master of a vampire nest located within the campus.

Appears in: "The Freshman"

A freshman at UC Sunnydale and an acquaintance of Buffy Summers.

Appears in: "Who Are You"

A vampire whose pack was forcibly recruited by Adam to be his "first", his announcers.

Appears In: "All the Way"

Appears In: "Conversations with Dead People"

A vampire and, formerly, a Sunnydale High student.

Appears In: "Lies My Parents Told Me"

The mother of William, the vampire later to become William the Bloody and Spike. Anne was sired by her son.

The leader of a large vampire gang based out of Tokyo, Toru tricks Dracula into giving his powers to Toru and all his men, steals the Scythe from Buffy's fortress, and plans to use it to depower all of the Slayers in the world. In the process, he kills Renee, Xander's Love Interest. He is defeated by Dracula, who lets Xander kill him in revenge.

Toru's right-hand man, he is killed by Satsu right before he can bite Buffy.

A Japanese vampire witch and follower of Toru, Kumiko was trained by the same demon guide as Willow.

Hester
A vampire from Buffy The High School Years graphic novel, "Freaks and Geeks". A social outcast in life, she and her friends fell prey to vampires and were turned. Now hoping to find a chance to improve her status with the undead, she seeks to kill Buffy.
Lisel
Also from Freaks and Geeks, Lisel was one of Hester's few friends and a fellow social outcast due to being a nerd. She was likewise attacked turned by one of the vampires of Sunnydale along with Hester and fellow nerds Greg and Stephen. Despite the change they all stuck together and continued their hobbies until convinced by Hester to attempt to kill Buffy to improve their social status.
Feedback