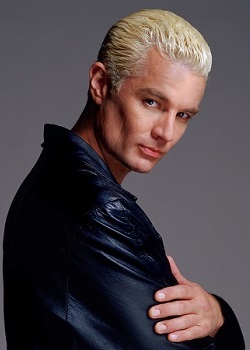 "I may be love's bitch, but at least I'm man enough to admit it."
Played By: James Marsters

British vampire who served as the villain for early Season 2. Was planned to die, but his popularity saved him. He showed up in one episode in Season 3 before returning for good in Season 4. Had a chip in his head that prevented him from hurting humans, so he joined up with the Scoobies for survival and so he could get his kicks by fighting demons. Eventually fell in love with Buffy, and had a twisted relationship with her in Season 6. Got a soul at the end of Season 6 and made a Heroic Sacrifice in the finale. Reappeared on Angel, and in both the Buffy and Angel comic continuations.