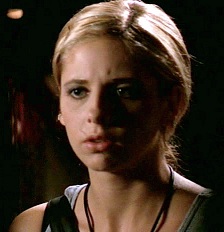 "The universe is what it is. We fight. We die."

When Cordelia wishes that Buffy never came to Sunnydale Anya creates an alternate world where she instead operates over the second-rate hellmouth in Cleveland. Buffy eventually makes her way to Sunnydale, after Giles tries contacting her, where we quickly see that she's...changed. 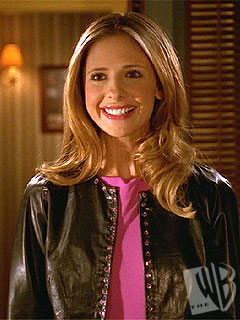 Xander: Hey, I know this. You're both Buffy.
Buffy: No, she's a robot. You couldn't tell me apart from a robot?
Buffybot: Oh, I don't think I'm a robot.
Anya: She's very well made.

An android replica of Buffy constructed by Warren at the behest of Spike during Season 5. She was later used as a decoy during the battle with Glory and pretended to be Buffy in-universe between Season's 5 and 6