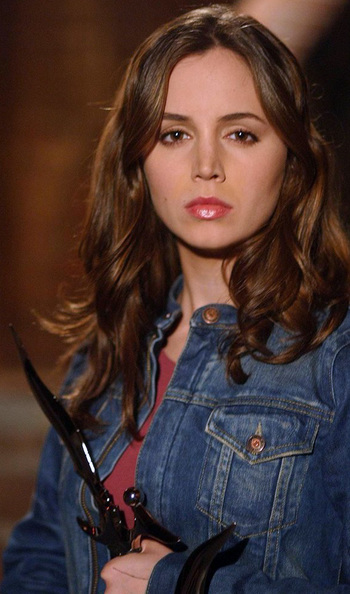 "You hurt me, I hurt you. I'm just a little more efficient."
Played By: Eliza Dushku
"Five by five."

Slayer from Boston activated by Kendra's death at the hands of Drusilla in the penultimate episode of Season 2, and a Foil for Buffy in Season 3. Loved slaying a little too much, and ended up playing The Dragon to the Mayor. Moved to Angel, ended up in jail, and came back redeemed for the final few episodes.

After the battle in Sunnydale, Faith joined the others as part of the worldwide Slayer Organization, setting up shop in Cleveland, where she assisted a Slayer squad led by ex-boyfriend Robin Wood. This changed after assisting Giles with a mission against a rogue Slayer, and together they decided to find Slayers that were having difficulty with their new life and help them out.

In the aftermath of the destruction of the Seed of Wonder by Buffy and Giles' death at the hands of a brainwashed Angel, Faith remains the only person willing to associate with Angel, and is dedicated to helping him — and herself — find redemption.