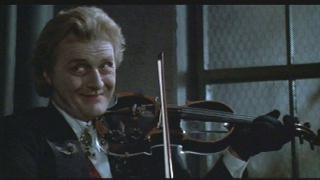 "You and I are one."
Played By: Rutger Hauer
"Don't you understand? I've killed dozens of Slayers. Your life is not a blink of my eye, not a single breath. I have lived in the shadows, in the pulsing filth behind men's eyes. I have conversed with the worms that fed on my corpse and I have bathed in the blood of emperors."

A vampire king in Los Angeles, and the first major villain Buffy faced. He is responsible for the death of Merrick, Buffy's first Watcher, and was killed during a school dance; this led to Buffy eventually moving to Sunnydale.

The Master A.K.A. Heinrich Joseph Nest 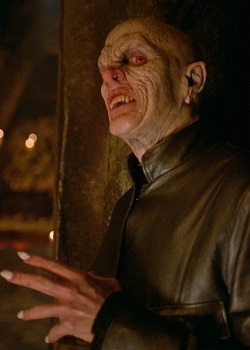 "Oh, good. The feeble banter portion of the fight."
Played By: Mark Metcalf
"Some claim that death is our art. I say to them—well, I don't say anything to them because I killed them."

An ancient and powerful vampire; was older than any other vampire on record.

The Master was the leader of the Order of Aurelius; a vampire cult that worshiped the Old Ones, and also the sire of Darla, inadvertently leading to a long legacy of infamous vampires. The Master sought to bring about the end of the world through opening the Hellmouth underneath Sunnydale until he was stopped in 1997 by the Slayer, Buffy Summers. 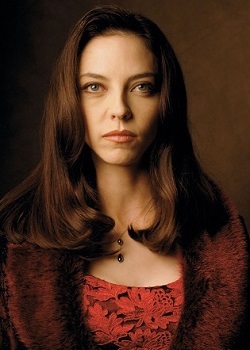 "We're going to destroy the world. Want to come?"
Played By: Juliet Landau
"Do you like daisies? I plant them, but they always die. Everything I put in the ground withers and dies."

A creepy cockney vampire who sired Spike in 1880. Formerly a chaste Catholic girl, cursed with "the sight"—visions of the future. Spotted by Angelus during his heyday, he took a liking to her and set about tormenting her and killing her entire family. Then, on the day she was to become a nun, he slaughtered the convent and turned her into a vampire. Certifiably insane, Drusilla has an almost child-like demeanor, hiding how extremely dangerous she is. Currently she is the Lieutenant of Archaeus who is the Monster Progenitor of the Master's bloodline while other vampires are descended from Maloker the Old One. 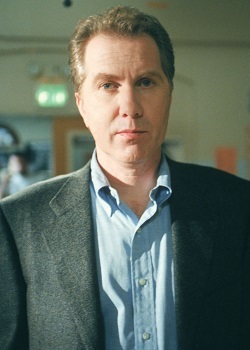 The folksy Mayor who concealed his satanic bargains behind closed doors. He had already achieved ageless immortality way before the series, and has been in Sunnydale since its founding. After the 'first' Richard got too old he just pretended to be his descendant (Wilkins II and III) and got reelected. It was the same guy the whole time, he just pretended it was a family legacy. Wilkins is a sorcerer who planned to undergo Ascension, becoming the embodiment of the pure demon Olvikan. The Big Bad for Season 3. 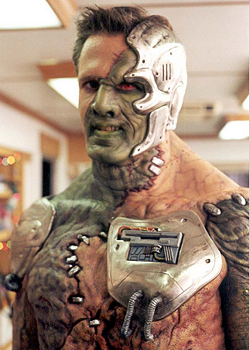 "No one - no human, no demon has ever been as awake and alive as I am. You are all just shadows."
Played By: George Hertzberg
"I'm a kinematically redundant, biomechanical demonoid, designed by Maggie Walsh. She called me Adam and I called her Mother."

A part-cyborg, part-demon, part-human creation of The Initiative (under Maggie Walsh). He has no conscience, and he is violently curious in how things work. He is nearly unstoppable, and he tries to create the perfect race of Human/Demon/Android hybrids. 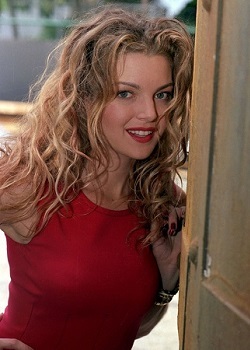 "Did anybody order an apocalypse?"
Played By: Clare Kramer
"Funny. 'Cause I look around at this world you're so eager to be a part of, and all I see is six-billion lunatics looking for the fastest ride out. Who's not crazy? Look around. Everyone's drinking, smoking, shooting up, shooting each other, or just plain screwing their brains out 'cause they don't want 'em anymore. I'm crazy? Honey, I'm the original one-eyed chicklet in the kingdom of the blind. 'Cause at least I admit the world makes me nuts."

Glory, also known as "the great and wonderful Glorificus", is an evil hellgod who has been exiled from her dimension by other hellgods. She is forced to occupy the body of a human named Ben, which reduces her powers. She regularly becomes disoriented and unstable and must drain the minds of humans in order to maintain her cognitive processes, leaving her human victims insane. She seeks the Key to return to her home dimension, not caring that her actions threaten to destroy the fabric of reality separating all dimensions. 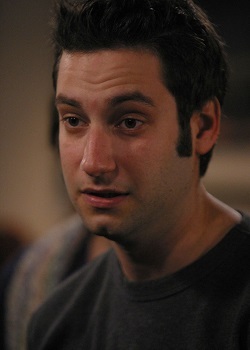 "Let's see how popular you are without a face."
Click here 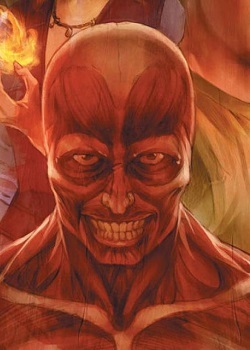 to see Warren in Season 8
Played By: Adam Busch
"So... you guys wanna team up and take over Sunnydale?"

The leader of "the Trio". He first appears to be a fairly normal nerd, but as he gains more power, he reveals himself to be a violent, bitter, anti-social sociopath whose sole aim is to force others to give him the love and respect he believes he is owed. 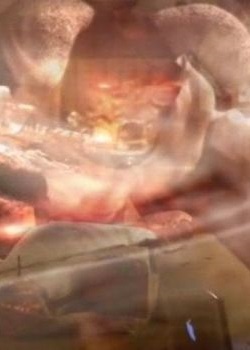 A unique entity that predated man and demon, apparently the personification of the concept of evil itself, manifested from all evil in existence. The First was an incorporeal presence that could assume the form of any person who had died, including vampires and persons who had been resurrected. Because of this, it appeared in various forms depending who it sought to manipulate. Its true appearance, or the one it used to portray its true appearance, was seemingly in the form of a large robed bestial demon. 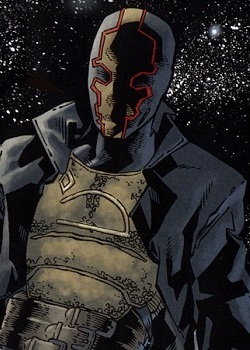 "Look around you. The Queen is dead. Long live me."

A mysterious masked villain who leads an alliance of Buffy's old enemies and the U.S. military against the new army of Slayers that Buffy created at the end of Season 7. He has Super Strength and Flight, and can be summoned by anyone who is marked with his symbol.

Tropes that apply to the sentient dimension Twilight 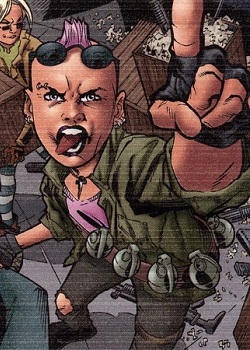 "We can be the agents of change and fear we were meant to be. It's who we are."
"Come back?! Haven't you heard? We're the bad guys now. People think vamps are cool and Slayers are the threat. Difference between you and me? I am a threat."

A rogue Slayer who broke off from Buffy's organization and started her own, believing that Slayers are better than other humans and that they should rule over them, no matter the cost. She also really likes guns. Simone wages a campaign against Buffy in San Francisco, blaming her for the hundreds of Slayers killed during the Twilight crisis and for not attempting to secure domination over humans—before teaming up with Severin. 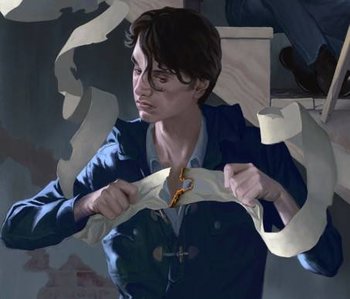 ""If you hadn't destroyed the Seed, I wouldn't have had to put down any of these vamp freaks down. You don't deserve the power you have so I'm going to take it."

A mysterious young man and vampire hunter, Severin is a figure in prophecy known as the Siphon. As a result, he wields the power to drain the mystical energy and powers of any supernatural being he touches, either bringing them down to normal or killing them outright. 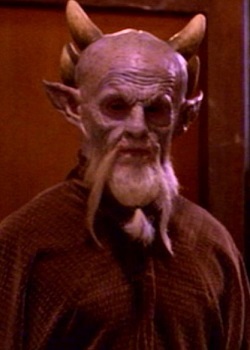 "Never go for the kill when you can go for the pain."
Played By: Andy Umberger
"Behold D'Hoffryn, Lord of Arashmaha, he that turns the air to blood and reigns te - Miss Rosenberg. How lovely to see you again. Have you done something with your hair?"

Anya's old boss, and the one responsible for recruiting and training new vengeance demons. 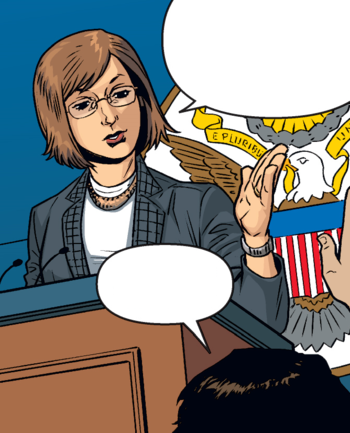 The White House Press Secretary, and the leader of the Pandora Project.