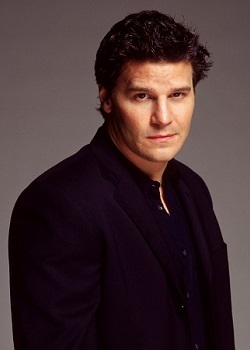 "I got two modes with people, bite and avoid."

"For a hundred years, I offered an ugly death to everyone I met, and I did it with a song in my heart."

Angel is a vampire, one of the most evil and sadistic on record. Born "Liam" in Galway, Oireland during the 18th century, he was sired by Darla circa 1753. Adopting the name "Angelus," he wreaked havoc across Europe for almost 150 years until he angered a Gypsy clan by killing one of their beloved daughters. The Gypsies cursed him by returning his soul, filling him with immense remorse for the countless crimes he had committed.

After a century of living in squalor and feeding off rats, Angel is recruited by the Powers That Be and sent to watch over Buffy Summers, the newly-called Slayer. He serves as a Scoobies' contact in the demon world and Buffy's first Love Interest, but loses his soul in Season 2, becoming a formidable Big Bad with a love of torture (both physical and psychological).

Even re-ensouled, the threat isn't over. Should Angel achieve even a moment of pure happiness, the gypsy curse is automatically lifted; their code of vengeance holds that it's better for him to become evil again than to do anything to ease his suffering. Realizing that he's a danger as long as he's around Buffy, he packs up and leaves Sunnydale for Los Angeles, where he gets his own show, Angel, continuing to fight demons as a form of penance for his crimes.

He returned to Buffy in the Season 8 comics, and co-stars with Faith in the comic series called Angel and Faith.