Family members of the main cast on Brooklyn Nine-Nine. For other characters, see here.

Jake's father who abandoned him and his mother when he was a kid.

Jake's mother, who raised him mostly single-handed after his father left them.

Jake's half-sister from his dad's side.

Roger's father, whom he hasn't spoken to since Jake was ten. 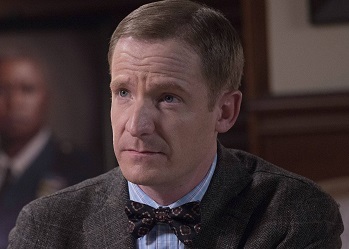 "Our home has a "no shoptalk" policy. I don't bring home Beowulf, and he doesn't bring home cop stories."
Portrayed By: Marc Evan Jackson

Holt and Debbie's mother, Marcus's grandmother, and a federal judge for the New York Court of Appeals. Introduced in "Your Honor," when her apartment is robbed and Holt enlists Peralta's help in solving the case.

Debbie's son, Captain Holt's nephew, and Laverne's grandson, who's staying with Holt and Kevin while in New York. He ends up getting romantically involved with Rosa.

Terry's wife and the mother of his children.

Portrayed By: Kelsey and Skyler Yates

Terry's brother-in-law who often bullies Terry for his height.

A woman Boyle meets and hits it off with... right as she's getting arrested. However, Jake and Boyle prove her innocent, so she and Charles begin a relationship. They later adopt a son together.

Boyle has a very large extended family, almost all incredibly similar. He has cousins everywhere, and they are all uncomfortably close.

Amy's mother and Victor's wife. She encourages competitiveness in her family.

One of Amy's seven brothers and a lieutenant in the NYPD. 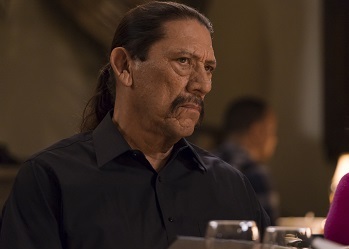 "You know what, mijita, maybe we better put game night on hold for a little while."
Portrayed By: Danny Trejo