This page is about the characters created or highlighted by Bob Lennon during his playthroughs. For the actual Bob Lennon article, check out his main page.

open/close all folders
Characters from The Bob Lennon Show 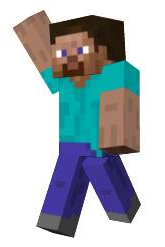 Jean-Kévin is the archetype of the annoying noob who regulary invades the Minefield server. He has the default skin (probably because he hacked the game), has a puberty voice and can't speak, read or write properly.

He came from Bob's experience of Minecraft, where he met a lot of young teens with a bad syntax and attitude. Bob still continues to call noobs "Jean-Kévins" with a "Mexican avatar".

"Where is it, dudes? I'm here to deliver my Smurf friends captured by a couscous box!"

A simple Smurf, companion of Bob Lennon. Smurf Lennon is the representation of the rest of Bob fans: he is sometimes annoying, Bob sometimes likes to tease him, but in the end they're friends and united against Jean-Kévin.

Bob still uses this voice to speak as a dumb character or to impersonate andience complains. Papa Smurf and Smurfette were planned, but eventually scrapped after the cancellation of the series. Only remains some samples of them Bob teased in the regular Minecraft episodes.

The Skull is a character created by Bob Lennon during his Skyrim playthrough, when he realised the skulls randomly disposed in the world had a movable jaw, and that shaking a skull up and down made it look like it was talking. The first time, he just did a The Twelve Tasks Of Astérix shout-out, but eventually did it more and more, developping each time a true personnality to the character.

Lydia is the first follower the player get in Skyrim and became quicly a fan favorite. Bob and his audience are no exception to the rule. 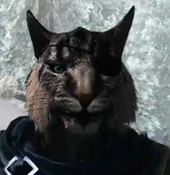 Kharjo is a Khajiit (actually one of the few the player can get in his team) and Bob's main follower. Bob's fondness for felines made him immediatly more affected by Kharjo's problems, whereas he usually doesn't care for others problems. After Kharjo's quest, he immediatly jumped on the occasion to have him in his team.

Bob's in-game wife, a merchant from Whiterun. Ysolda currently lives in his mansion in Lakeview, not doing much except gathering money, milling around and occasionally being Fus Ro Dah'd all over the place by her husband everytime he comes home. 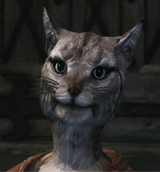 Bob's adoptive Khajiit daughter, who he came across in a remote fisher's house in the middle of nowhere. His fondness for both cats and cute kids set his protective instincts into full gear, leading him to "rescue" (even though she didn't seem to be in danger, but Bob killed the imperial soldier who seemed to guard her anyway) and adopt her. He eventually trains her to become his successor.

Originally Calder, an housecarl put under Bob's orders by Ulfric Stormcloak, and was "tasked" to guard Bob's mansion in Windhelm permanently. Got upgraded into C4LD3R Unit when Bob gave him a set of modded Dwemer armor, mostly to diminish his unsightlyness.

A farmer form Rorikburg who dreamed of being an adventurer. Eventually got the chance to realise his dreams after Bob completed his sidequest and hired him. While currently living in Bob's mansion along with his other companions, he is probably his second most appreciated ally.

Bob's adopted Khajiit son and overall third adopted child. Like Ma'isha, Bob adopted him on sight simply because he was a Khajiit.
Other characters 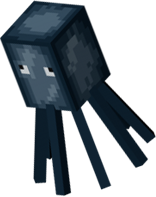 During the visit of a Minecraft map reproducing Minas Tirith from The Lord of the Rings, Bob encountered a random squid in a one bloc-sized water pool, the poor animal stuck in this small aquarium. Bob, amused by this situation, called him the Minas Tirith Octopus, guard of the citadel. In later videos, he encountered others random squids, sometimes in the same situation, and occasionally assumed it was the same squid who followed him since Minas Tirith. 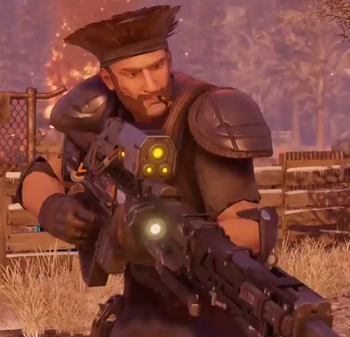 "One down, thousands more to go."

First appearing in X-COM, Gaston Dreyfus is an elite soldier from France who proved himself on the battlefield. He later became a legendary veteran in XCOM: Enemy Unknown, before leaving the army and leading the resistance crew in FTL. 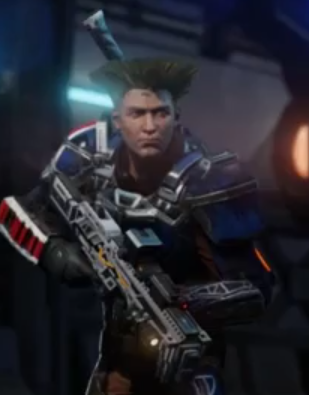 First appearing in XCOM 2, Gaston Poklonskaya is the son of Gaston Dreyfus and Natalia Poklonskaya who tries to follow into his parents' steps in heroically defending Earth from the alien invaders. He's a bit nervous to go to battle against the aliens at first, but eventually becomes more cocky after getting some experience. 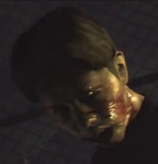 In Resident Evil 6, one of the random stock zombie you can encounters in China looks like Shigeru Miyamoto according to Bob, who lampshades him everytime he encounters him. Bob subverted the Running Gag himself (consciously?) by calling him Hideo Kojima in the very last bonus episode. 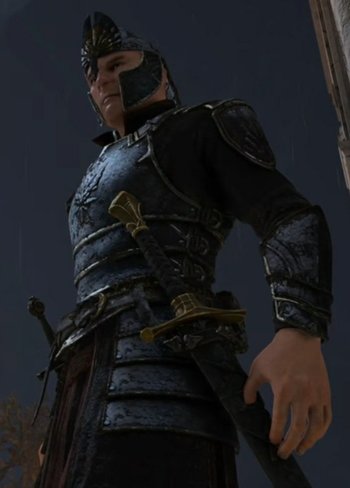 Originally a simple unnamed Gondorian Sergeant in Shadow of War dubbed Antonin the Gondorian by Bob after the former saved the latter from an Uruk captain about to execute him and killed it in Episode 2. The feat was already quite impressive in itself, coming from an unnamed NPC, but he then proceeded to do it again only a few minutes later, and then a third time, managing to One-Hit Kill an almost full life level 15 Uruk captain. All in a single episode. 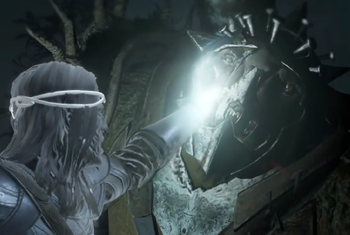 Just an usual day for the Dragon.

Ar-Beka the Dragon is the first captain (excluding Bruz) Bob recruit and make into a bodyguard, the latter on Bruz's advice. Like any good Uruk or Olog worthy of his name, Ar-Beka then proceeds to betray and ambush Bob. All of this in less than three minutes. Thus, Bob began an epic quest to shame Ar-Beka back into his army. Ar-Beka eventually breaks and is rewarded for his trouble by being named overlord. Yay. Well, up until Bruz's betrayal, at least. Bob swiftly take back his fortress, but is so impressed in another captain's performance (and finishing moves on Bruz's captains) in doing so that he names him the new overlord and makes Ar-Beka a "simple" warchief.