Only child and heir of the Head Priest of the Myoo Dharani sect, which got branded as a "Cursed Temple" due to being a victim of the Blue Night. Ryuji is working to acquire both Aria and Dragoon Meister. He also wants to kill Satan, mainly out of a desire to restore his family's temple. He's a major hot head and struggles often to understand others, though he's working hard to overcome his weaknesses.

A stubborn, haughty girl with twintails who initially mocked Shiemi. Instant Expert at calling up Familiars, rather skilled in combat. She's a Jerk with a Heart of Gold and is a top student in both normal school and cram school.

One of Ryuji's childhood friends from Kyoto. A perverted Buddhist priest with pink hair and entomophobia. The fifth son of his family. As all the spoiler text below suggests, he's much more than he seems.

The other of the Kyoto trio. He's a short priest with a shaved head and a timid nature. Good at reciting scripture, though not nearly at the level that Ryuji can. He's also the smartest of the team, though it takes time for him to really start speaking his mind and applying his brains properly. 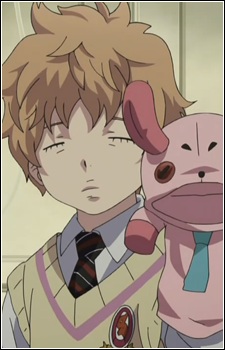 One of the cram school students. He doesn't talk, instead uses a Bunny Rabbit puppet to communicate rudely to the others.