This is The Emperor of the Vandenreich, whose folder was so large, it needed its own page to avoid the Vandenreich page from getting its edit page locked. 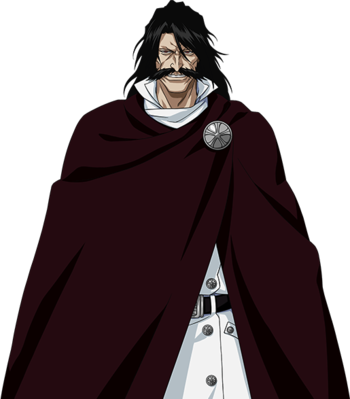 "Conflict is always such a bitter affair."
Species: Quincy
Weapon: Unnamed sword
Schrift: A - The Almighty
Voiced by: Takayuki Sugo (JP)
The Emperor of the Vandenreich and The King of the Quincies. An extremely ruthless autocrat, he has no qualms about committing one atrocity after another in his crusade. One thousand years ago, he confronted Shigekuni Yamamoto in an unresolved battle. He is the only person Yamamoto never calls a "child".

Yhwach holds the letter "A" of "The Almighty", serving as the supreme commander of the Vandenreich's military. Under the usage of the Schrift (or script), he personally bestows a letter upon a member of the Vandenreich, meant to correspond to their particular ability.

His Quincy cross — stylized as a military medal bearing the Vandenreich symbol - manifests in the form of a winged, eagle-themed sword. His power "The Almighty" allows him to give and take power, negate every harmful ability, once he understands it, and finally see and change the future.