BlazBlue, much like Guilty Gear, has plenty of Rummage Sale Rejects to go around. These are all the non-playable characters who show up in the story. Some of them play a significant part of it, while others are just extras who really don't play much part in anything. Voice actors are listed as Japanese/English.

open/close all folders
Amaterasu / The Origin 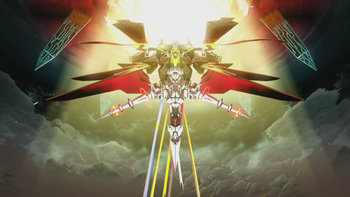 “I was waiting for so long… I always… Always wanted you to save me.”

The Origin Voiced by: Yukana
The Master Unit and the top of the Sankishin (the other two being Susanoo and Tsukuyomi). It is the unit that is responsible for the current setting of the BlazBlue universe. It takes form of a giant satellite with a coffin on it, inside which lies a mysterious girl. It is able to perform Phenomenon Interventions on a large scale, which makes it basically the "god" of BlazBlue world.
It is situated within the Boundary, normally close to the Abyss of the Azure. However, the events of Chronophantasma forced it to come closer to the world, and due to Nu-13 opening the Nemesis Horizon, it fully appears on the skies above Ibukido. Our villains aim to destroy it to stop its influence, while Rachel is determined to protect it.
Black Beast 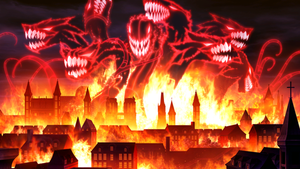 The legendary creature that threatened the safety of the entire world, before its defeat at the hands of the Six Heroes. It exuded Seithr from its own body and covered the planet, causing many areas to become inhospitable, and even altering some of the creatures and turning them into violent beasts. A warrior named Bloodedge was responsible for causing the Beast to fall silent for one year, sacrificing his life to do so. This time frame allowed the people to develop and learn how to use magic, and, along with the Six Heroes, combat the Black Beast head on.
Bloodedge 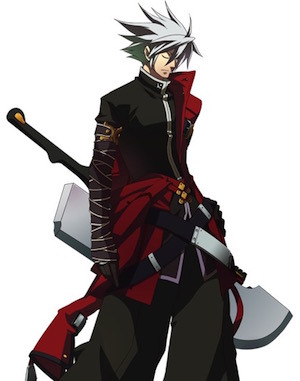 “Also, you’re underestimating the pain someone has to endure when they can’t protect someone they love. They will drag it inside of them for the rest of their lives.”

Voiced by: Tomokazu Sugita (Japanese)/ Patrick Seitz (English)
An unsung hero of the Dark War, he managed to stop the Black Beast for a year by sacrificing himself. This small window he created allowed the Six Heroes to teach humankind how to use Ars Magus, and to amass a greater and stronger following. 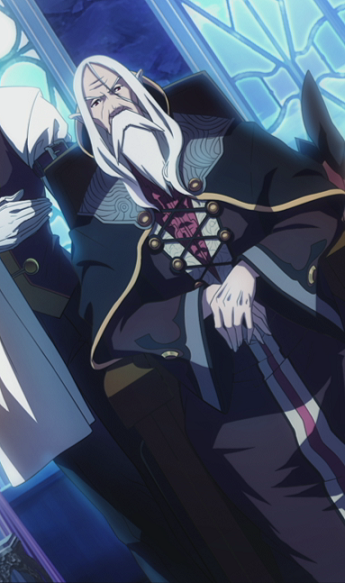 “Much like this castle, I am ensnared by the ivy. I can no longer move from here. The one who can act is not me, but the living mankind.”

Voiced by: Tamio Oki / Paul St. Peter
Clavis was the previous head of the Alucard family, said to have lived for over a millennium. He watched over the human race and helped prevent the Black Beast from destroying them, as well as sealing Terumi inside the Boundary before the Six Heroes were formed. Rachel is his daughter, and Valkenhayn served as his butler before (and after) working with the Six Heroes. He died during the events of the later Phase Shift novels.
He also appears in the Bloodedge Experience novels, as his younger self, and plays a more active role. During which, he also has another, adopted daughter named Raquel Alucard.
Gii 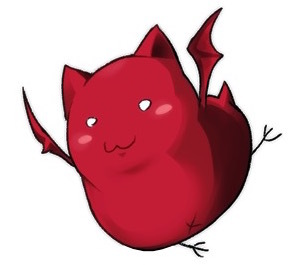 “Owwww! I can’t stretch that far! You’re going to tear me in half!”

Voiced by: Sena Tsubaki (CT-CS), Saeko Zougou (CP), Kazue Fujita (Drama CD) / Cindy Robinson
The second of Rachel's familiars. He's the red bat, and the one who always gets the butt-end of Rachel's "punishments". Has the ability to grow in size.
Homura 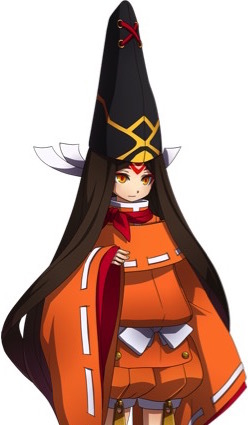 “Bang… You’ve led the people of Ikaruga well all these years. In the place of my father, I thank you.”

Voiced by: Inori Minase (Japanese) / ??? (English)
Tenjo’s child. Believed to have died in the Ikaruga Civil War, but actually survived. Bang went to Ikaruga in Chrono Phantasma in order to search for Homura.
Kajun Faycott 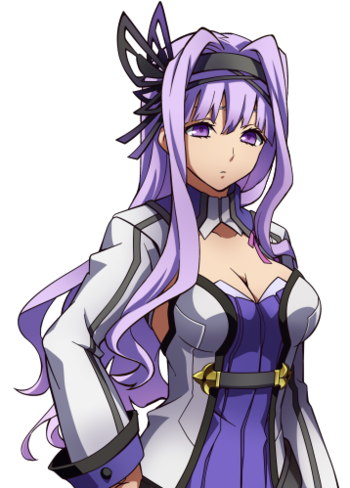 “I will be sure to support Mai in her affairs. There is no need for you to worry.”

Voiced by: Saki Fujita / Cherami Leigh
Mai Natsume's eccentric roommate at the Military Academy and supporting character in the BlazBlue Remix Heart and BlazBlue Variable Heart mangas. She also appears as an NPC in the Remix Heart Gaiden section in Chronophantasma Extend and Centralfiction.
Lao Jiu
Litchi’s adorable pet, Noel’s subject of desire and Tsubaki's subject of disgust, Lao Jiu is a little Panda of an unknown species, Lao Jiu is a fairly mysterious character in that he channel the spirits that lies in the Boundary and share the powers with its owner, in a manner of speaking Lao Jiu is a living device which augments Litchi’s powers.
It’s unknown when and where Litchi came to know and raise Lao Jiu as her pet, but it’s clear that they share a good relationship, Lao Jiu is always seen with its owner, Litchi raises it on her hair, making Lao Jiu look like a hairpin due its size and seemly quiet nature.
Linhua 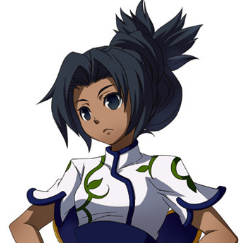 “But above? I can’t really stand those guys. Everyone up on the higher layers treats the underground people like trash. I can do without those arrogant jerks.”

Voiced by: Yukiko Kato / Michelle Ruff
Litchi's assistant. She idolizes Litchi and works to match her skills in medicine, and grow to be just like her. Despite this, she is unaware of Litchi's past, or her relationship with Arakune.
Suffers from a major case of Hero Worship toward Litchi. Her behavior would be easy to misinterpret, if she hadn't nipped that perception in the bud early on, stating she's more "reverent" of Litchi, than "fond."
Nago 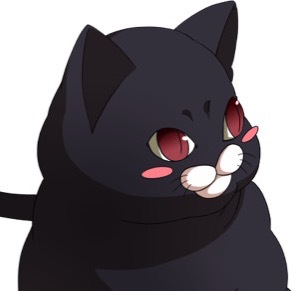 Mmmm, a hot man all tied up… Ah, it just makes me tingle! 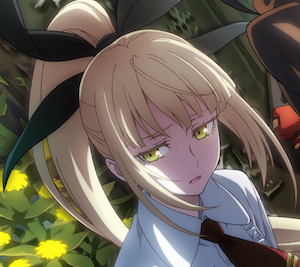 “That’s why… You must save this world’s “possibilities” and quick. You need to save your… “our world!””

Voiced by: Kana Ueda
A character from Bloodedge Experience novels who mainly serves as Naoto's partner. A goth-loli vampire in the vein of Rachel. Clavis Alucard's adoptive daughter. Has a weird habit of... getting naked (or close to it) as well as being uncomfortable (so much that she gets panic attacks) around women. Her Drive is Tempest, an ability to control wind currents, much like Rachel's Silpheed.
She first meets Naoto when she was chased by a strange, grotesque insect man; Naoto goes to save her and beat the insect man, but he lost his right arm in the process. Raquel then offers to save him from bleeding to death in exchange for him to find the Azure. The next day, he finds himself to be normal (with his right arm again) but technically dead; Raquel explains that she shared her immense life force with him, but that will turn him into a vampire in a year - unless he does what she made him promise to.
In Central Fiction Naoto comes to the present in order to find her.
Saya 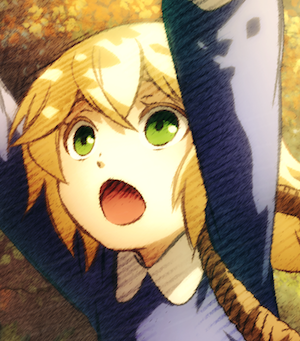 “But I wanted to be with you, brother.”

Voiced by: Kanako Kondou (CT) / Cristina Valenzuela (CT)
Ragna and Jin's missing little sister. She is the template for the Murakumo Units (Lambda, Mu (Noel) and Nu). She was taken by Terumi after the burning of their church. The Material Collection reveals that she has incredibly high ars magus aptitude and was raised in the Church to hide her from Terumi.
Takamagahara 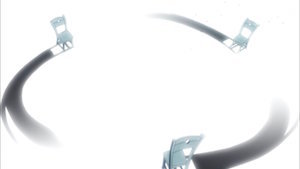 “Negative. Takamagahara is a system built by humans. Anything which has been “built” by humans can never be designated as a “god.””

TA is voiced by: Naomi Kusumi / Travis Willingham (CS), Michael McConnohie (Alter Memory, credited as Geoffrey Chalmers)
TB is voiced by: Seirou Ogino / Ezra Weisz (CS), Bryce Papenbrook (Alter Memory)
TC is voiced by: Rina Satou / Kate Higgins (CS), Wendee Lee (Alter Memory)
A man-made entity (heavily implied to be a supercomputer) of unknown origin and purpose with the ability to manipulate space and time. It actually possesses three minds/selves, which observe every possibility of existence. Though its original purpose is unknown, it works to destroy the Master Unit, Amaterasu, so that it can control the flow of space and time, and give existence a cold, mechanical sense of order.
Take-Mikazuchi

Full title of Gigant: Take-Mikazuchi note Highlander: Take-Mikazuchi in the Japanese version, a weapon created hundreds of years ago during a war hidden from history, it is the original Nox Nyctores. Nine revived it and used half of its core to create the rest of the Nox Nyctores during the Dark War. It takes a form of a coffin-like satellite that holds a humanoid creature inside it that can fire a devastating laser. It can only use its strongest ability once every 4 years. After the Dark War, it was used by Takamagahara; in particular, it used the satellite to destroy the Hierarchical City of Ibukido, which killed Mu depending on the timeline. Four years later, it was used again in order to destroy Kagutsuchi, but Rachel used Tsukuyomi Unit in the True End to block the shot, saving the city and forcing it to recharge another four years.
In Chronophantasma, Take-Mikazuchi appears as a boss in a mode called "Gigant Assault". It is fought in a large area and it possesses many attacks as listed below.
It has an Astral Heat

where the opponent is trapped in a red light. A portal appears below the player and fires several super-charged versions of Nu's swords at them from below, lifting them into the skies where four magical chains bind them in a circular energy prison. Take-Mikazuchi rises up into the skies and transforms into its Kill Sat mode as seen in Calamity Trigger cutscenes, firing its laser at the opponent and erasing them from existence as the screen turns white.
Lord Tenjo

“Please, watch over Bang… Kagura… My people… …and above all, my child Homura.”

Bang's master, and the leader of Ikaruga from before the Civil War. Was frozen to death by Jin Kisaragi, starting Bang's path for revenge.
Torakaka 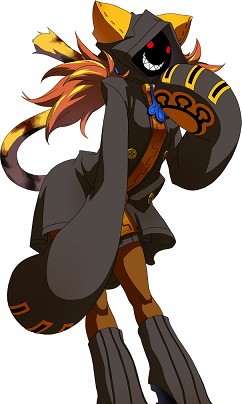 Voiced by: Kaori Yagi / Kate Higgins
Another resident of the Kaka clan. She is, naturally, Taokaka's friend and is like a big sister to her. She is a former guardian of the Kaka Village, and was in the middle of training Taokaka to be the next guardian while she went to go take part in the Ikaruga Civil War, which is how Ragna first met Tao.
During Tao's bad ending in CS, she carts her off to safety while Valkenhayn hangs back to stop Terumi, also stating that Torakaka's been working with him and Rachel for some time.
Trinity Glassfille 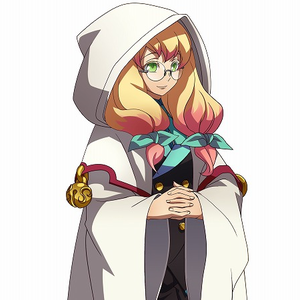 “Please… Please do not forgive me. I cannot forgive myself. If I wasn’t so weak… So foolish.”

Voiced by: Aoi Yuuki / Laura Bailey (games), Alexis Tipton (Alter Memory)
A member of the Six Heroes, Trinity was known as the Platinum Alchemist during the Dark War. She studied at the Magic Guild alongside Celica and Nine. After the events of the Dark War, she is sealed within Platinum's Nox Nyctores (which was originally hers) and manifests from time to time.
Unknown Character

“…I see. Then you shall fall into the Hell called “possibility” as well.”

Voiced by: Asami Imai
A mysterious character who appears at the very end of Central Fiction, asking Rachel Alucard if she still wants to make good on a "Promise."