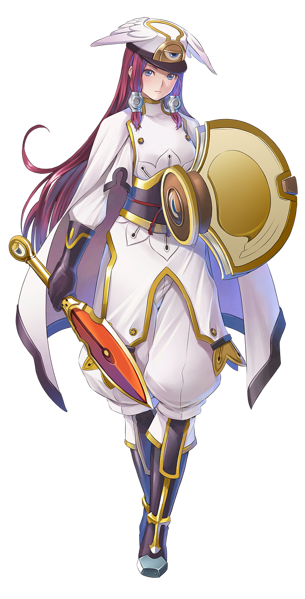 Cue "Ride of the Valkyries".
Click to see her outfit in Continuum Shift. 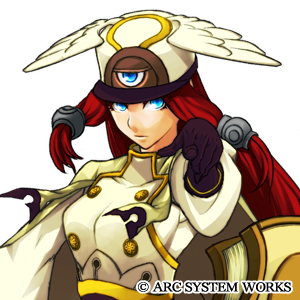 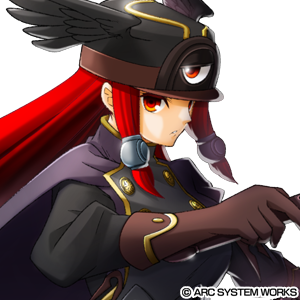 "White feathers for innocence, black feathers for darkest sin. We are the messengers and hammers of God, come to deliver righteous justice. Let sinners be punished! Let justice be done!"

Voiced by:
JP: Asami Imai
EN: Julie Ann Taylor
A fellow classmate of Jin, Noel, and Makoto from the Academy. Tsubaki comes from the noble Yayoi family. She's also Jin's childhood friend and has harboured a secret crush on him since they were young. After graduation, she served under the Zero Squadron/Wings of Justice, whose duty is to punish those who rebel against NOL. After the True Ending of the first game she was given orders by Hazama to execute Jin and Noel for knowing about his plans. And so she is sent out to Kagutsuchi to accomplish her mission, armed with an Armagus called Izayoi which steals light and uses it as a weapon. Later story developments will have her learning some awful truths which makes her go down the dark path, and her friends must save her.
Advertisement:
Her canon path reveals much of her family's history. The Yayoi family is one of the oldest members of the Duodecim - the twelve noble families who helped form the original NOL. Her house and the Kisaragi house, which Jin belongs to, have very close relations with one another. Both families are quite famous, but also infamous within the NOL. Both families have very strange ethics, which causes them to be seen disdainfully in the eyes of the other families. In the Kisaragis' case, they take in children from all around the world due to their talents and are seen as mercenaries. In the Yayois' case, however, they are the opposite - family is the most important thing. So important, in fact, that when children began exhibiting weaker ars magus aptitude were born, members started resorting to incest and inbreeding in the mad delusion they would get stronger. Tsubaki is not the first-born child of her family - she is the first to survive. The day she met Jin, however, was like meeting a long-lost relative to her, and the two became close friends throughout their childhood.
Advertisement:
Her Arcade mode playthroughs are named, in the second and third game respectively: ARCH ENEMY and Never Break Your Heart. Her story mode playthrough in the second game is named regret sin.
Her Drive, Install, fills a meter that increases the power of her attacks. In Chronophantasma, her Overdrive is Second Install, which causes her charge gauge to automatically regenerate.
In the fourth game, her Exceed Accel Shinbatsu: Mei wo Iru Ikazuchinote (Court Punishment: Thunder Shoots (Through) the Dark) / Macto Lux Kyrie has her stun her opponent with the Izayoi book. Then she turns her blade into a bow of light and then fires a multitude of laser arrows at the opponent. Her Astral, Shinsei: Hito wo Sabaku Kami note (Saint's Court: God Judges the People) / Requiem Aeternam, has her using Izayoi's power to turn her into an angel and bind the opponent in place as a statue of a goddess (the same one seen in the background of Jin's stage) finishes the opponent off by impaling them with its massive spear. In Chronophantasma, the statue has been recolored black.
open/close all folders
# - C
D - N
O - Y 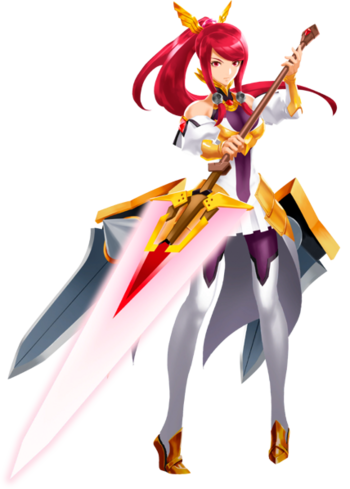 What happens when Tsubaki watches too much Gundam.
Profile

With the blade of retribution and scales of judgment, I come to deliver righteous justice! Atone for your sins!

Voiced by:
JP: Asami Imai
EN: Julie Ann Taylor
This is the true form of Tsubaki Yayoi's Armagus, the Sealed Weapon: Izayoi.
Through the Imperator's mind control spell, Tsubaki is forced into unleashing the full powers of Izayoi in order to accomplish her idol's goal of upholding the law of the NOL. Her profile, however, indicates that she will be freed from the effects of Mind Eater, and will seek the meaning of "true justice." Indeed, her arcade play takes place after she's freshly released from the Imperator's curse, and she's going around seeking answers for herself.
Her arcade playthrough is named The Awakening.
Her Drive, Scarlet Justice, lets her switch between her normal mode and Gain Art Mode, used for offensive attacks, much like Aigis in Persona 4: Arena. Her playstyle revolves around building the Zero Weave Gauge by using specials in normal mode, then using the gauge for her Gain Art Mode-specific moves. Her Overdrive is Freedom Justice, which continually builds up the Zero Weave Gauge.
In the fourth game, her Exceed Accel Banshee Lancer has her stun the foe with her sword. Then her Attack Drones start attacking the restrained foe multiple times, ending with a big cross-slash. Her Astral, Judge of Destiny, is very similar to her old one, but with a new animation: she transforms into a valkyrie with a shield and lance, as well as a different outfit than her original Astral. She then combines the shield and lance into a giant energy sword with angelic wings and feathers, before sending it rocketing towards her foe, impaling and disintegrating them.
Tropes involving Izayoi