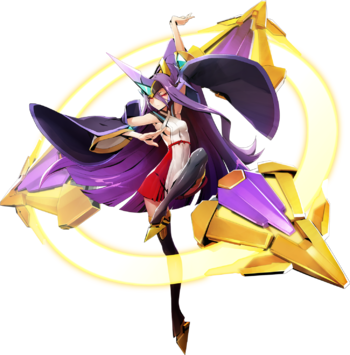 The (former) Imperator. Just as flat as her lookalikes.
Profile

I shall deliver death unto all of the living.

Voiced by: Yukana (Japanese) / Kate Higgins (English, credited as Kate Davis in Alter Memory)
Full name Hades Izanaminote Meiou (Dark Lord) Izanami in the Japanese version. The Imperator Librariusnote Mikado (Emperor) in the Japanese version — the head of the Novus Orbis Librarium and de facto ruler of the world. Only a few have actually seen the Imperator in person, those few being the heads of the Duodecim and select high-ranking members of the Library. She's shown first in CS true ending and becomes more prominent in CP onward.
Advertisement:
Confirmed as a playable character for Central Fiction in the January issue of Famitsu. She serves as the Final Boss of Act II of the game's story, titled "Nightmare Memory". She does not battle in her usual, regally-stylized Shinto priestess kimono, but changes her costume to a less restricting, more revealing outfit, with a giant, floating ring resembling a thunder god drum behind her called the Yasakani no Magatama.
Her Drive is called Sharin (Exodus Arc). By pressing the D button, Izanami activates the Yasakani no Magatama, acting as a stance switching mechanic in the same vein as Izayoi. While in this stance, the Imperator can fire projectiles at the opponent with directional inputs and the D button, and gains several new moves and abilities at the cost of not being able to block. Her Overdrive is called Zekkai (Arc Force). When activated, she gains the ability to use the moves of both her normal stance and Yasakani no Magatama stance, including normal blocking.
Advertisement:
Her Exceed Accel Nayuta (Arc Drive)/Melancholy Death involves her trapping the opponent within a seal as several skulls appear beneath their feet. Suddenly, a loud scream rings out as both Izanami transports herself and her opponent into the realm of the dead, with Izanami's face becoming skeletal as she thrusts her hand into the opponent. Her Astral Heat, Tokoyo no Yami/Eternal Darkness, involves her grabbing the opponent and opening a portal to the underworld which unleashes dozens of spirits in a hurricane, which launches the opponent into the air. Still holding on to the opponent, seven skulls appear, crashing into the opponent alongside herself and dragging them into the underworld. She then reappears on the stage.
open/close all folders
A-J
K-Y