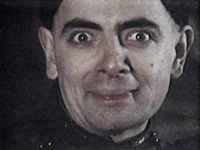 "I wonder if it was the wine..."
Played by: Rowan Atkinson
"If we lose, I'll be chopped to pieces. My arms will end up at Essex, my torso in Norfolk, and my private parts stuck up a tree somewhere in Rutland."

The Blackadder lineage begins with the slimy Prince Edmund, who plots to take the throne from his father. Unfortunately for him, he's really, really stupid. Fortunately for him, one of his descendants is not and, using a time machine, makes sure that this Edmund never drinks the poison that killed him, thus assuring he - and, in turn, the descendant - would becoming King. 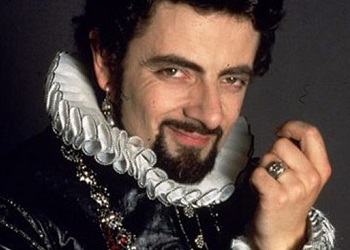 Played By: Rowan Atkinson
"Well, it is said, Percy, that civilised man seeks out good and intelligent company, so that through learned discourse he may rise above the savage and closer to God. Personally, however, I like to start the day with a total dickhead, to remind me I'm best."

A few generations later, the Blackadder dynasty has gotten some steps up the intelligence ladder, but also has fallen some steps from the social ladder. Now a courtier to Queen Elizabeth, he has to put up with her antics and avoid being beheaded. 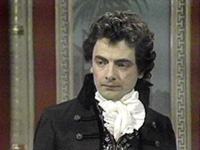 Down the social ladder and up the intelligence rung again, the treacherous third Blackadder serves as the butler to the brainless Prince George. 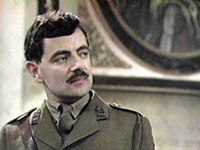 Played By: Rowan Atkinson
"For us, the Great War is finito, a war which would be a damn sight simpler if we just stayed in England and shot fifty thousand of our men a week."

The Blackadder line ends with this man. A weary and annoyed Captain in the thick of WW1, trying to find his way away from the front line before going over.