"I am indeed arrogant, but not so much that I would irresponsibly boast that I can save anyone."

The current Earl of Phantomhive, the sole survivor after the mysterious and untimely murders of his parents and the burning of his mansion. With the aid of his loyal butler, Sebastian, who appeared in his service only two years ago, he has not only maintained but strengthened his family's wealth and title, while also serving as "the Queen's Guard Dog", charged with investigating and dealing with problems relating to the criminal underworld.

See his folder here for tropes regarding him.
Sebastian Michaelis

"Even though I dislike being kicked by others, I do enjoy the feeling of kicking others."

The eponymous character. Ciel's mysterious but charismatic and highly skilled butler; he appeared out of nowhere with Ciel two years ago and is rarely far from his master's side. In reality, he is actually a demon who has made a Faustian pledge to Ciel; in exchange for utter obedience to Ciel, and assisting him in finding and killing the murderers of Ciel's parents, Sebastian will be allowed to kill Ciel and take his soul once his service is ended or Ciel dies.

See his folder here for tropes regarding him.

"A tiny mouse can run anywhere, but they are always in my sight."

The maid of the Phantomhive household. She wears Opaque Nerd Glasses given to her by Ciel that limit her eyesight and prevent her from viewing objects correctly at close-range, which causes her to be clumsy when doing her chores. Mey-Rin is actually a professional sniper and due to her sharp binocular vision, she does not require a scope to aid her.

"Cooking is an art! And art means explosions!"

The chef of the Phantomhive household. However, he never makes anything edible as he uses weaponry such as flamethrowers to cook, believing that cooking is an art requiring explosions. He's a former soldier and while terrible at cooking, he is shown to be capable of taking advantage of his surroundings, such as using fine flour to create an explosion.

"It requires strength? Since that's the case, I might be able to do it! I wanna do it! Please allow me to do it!"

The gardener of the Phantomhive household. However, it seems every time he tends to the garden, it is destroyed through an accident caused by his clumsiness. Finnian was a test subject in some human experiments that gave him Super Strength and was taken in by Ciel after he ran away from his cell. 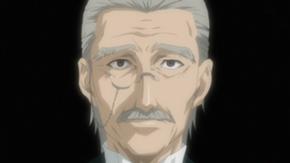 The steward of the Phantomhive household and the only one of the servants who has worked for the household since before the death of Ciel's parents.

"I'm sorry for my carelessness that could have sent you to the next world."

The snake charmer of the Noah's Ark Circus. Said to be half-snake himself, Snake is capable of understanding snakes and allows them to speak through him. He returns after the events of the Murder Mystery arc, Ciel gets him to join his staff and Snake becomes the footman of the Phantomhive household.