For characters seen throughout the series, such as the Big Daddies, Little Sisters and Splicers, see here.

For characters who originated from the first game, see here. 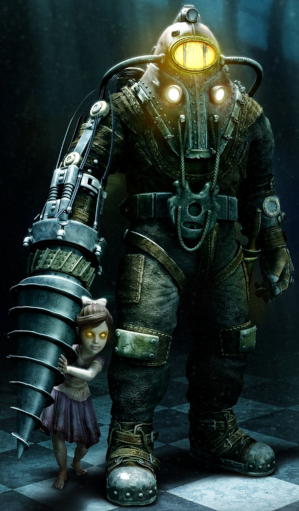 The protagonist of BioShock 2 and the Player Character, a Super Prototype Big Daddy and the first to be successfully bonded to a Little Sister, who happened to be Eleanor Lamb. Unfortunately for Delta, Eleanor's mother Sofia managed to recover her and used an Hypnotize plasmid to force him to shoot himself in the head. Delta was revived years later by Doctor Tenenmbaum to stop Sofia who has taken over Rapture and aims to do something terrible to Eleanor.

Voiced by: Fenella Woolgar
"Until ADAM, the human animal was a slave to the gene... the inner Tyrant. Lust... greed... rage; self obsession was etched into our DNA. We were not pulling the 'Great Chain of progress,' as Ryan believed - but shackled to it. But now, in theory, we can redraft the human blueprint. Serving the common interest can become as natural as breathing."

The Big Bad of BioShock 2. An idealist as obsessive as Ryan, but with a philosophy that's diametrically opposite. She believes in absolute collectivism, denouncing individuality and even sentience as a curse. She plans to use her daughter Eleanor to set the foundations for Utopia, whatever it takes.

Voiced by: Doug Boyd
"You do business as long as I have, and you learn to pick a brand name from the writin' on the wall."

A friendly, charming and somewhat amoral businessman who aids Subject Delta in his quest to reunite with Eleanor Lamb.

Voiced by: Sarah Bolger, Sydney Unseth (as child)
"Love is just a chemical. We give it meaning by choice."

Voiced by: John Hilner
"Anyone in the Plasmid business ultimately requires the use of human test subjects. It's our dirty little secret, and to be frank, Rapture doesn't really want to know, provided the end product is sound."

Another one of Fontaine Futuristics' leading scientists, Gilbert "Gil" Alexander replaced Dr. Suchong as head of the Protector Program; in this position, he created the Alpha Series and the symbiotic bond with their Little Sisters—making him indirectly responsible for the creation Subject Delta. Following the collapse of Rapture's security police, he also designed the city's automated security system. However, he eventually fell in with Sofia Lamb and the Rapture Family, assisting in their development of a "Utopian."

Voiced by: Bill Lobley
"Took real guts to find Rapture like he did... makes it easier not to crack if I sort of... imagine that I'm him. It's a good thing I can't tell Lamb about that though. She'd probably say I got a secret need to fall into his arms and make wild whoopee!"

Stanley Poole was a reporter for the Rapture Tribune newspaper. He was hired by Augustus Sinclair on the behalf of Andrew Ryan to infiltrate the Rapture Family, and gather evidence so that Sofia Lamb could be imprisoned. It all went downhill for him from there.

Voiced by: Sheryl Lee Ralph
"Ryan doesn't care and Fontaine's a damn crook, but Doctor Lamb cares. We're still people to her. She's offering free mental counseling on Sundays. When I go, I get the feeling she's got a plan for Rapture... and for me."

A lounge singer who was blacklisted by Andrew Ryan after singing protest songs against his rule, with her lover James being taken away. She became one of Sofia's most devoted followers, and was entrusted with keeping Eleanor safe when Sofia was imprisoned by Ryan. She failed in her duty when Stanley Poole betrayed Sofia and kidnapped Eleanor. Grace eventually saw Eleanor as a Little Sister being guarded by Delta, who broke her jaw when she tried to hug Eleanor, prompting Grace to believe that Delta was the one who kidnapped Eleanor and transformed her. Sofia gave her control over Pauper's Drop after taking over Rapture.

Voiced by: Richard Poe
" Andrew Ryan left us wandering confused and alone amongst yesterday's wreckage. But Sofia Lamb shows us that we are not alone, we are together, as a family."

One of the architects that Andrew Ryan hired to design Rapture alongside his brother Daniel, he was struck hard by the depression that hit the city and blamed himself for leaks in the city that killed citizens. He found comfort in Sofia Lamb's teachings, and restyled himself as "Father Wales", spreading her message as the leader of a religious cult called the "Rapture Family" in Siren Alley.

Voiced by: Graham Rowat
"But I was the black ol' sheep back there, never believin' a word o'the Jesus bollocks meself. Then Andrew Ryan says he wants Wales an' Wales for Rapture — a Cathedral with no God, befittin' the ascent o'man. Now I'm runnin' girls... and Simon thinks he's saving souls."

Simon's brother and his former partner in designing Rapture, Daniel felt none of the guilt his brother did when leaks killed several people around Rapture. He refused to follow his brother into Sofia's cult, and instead established himself as the head of the Pink Pearl Brothel in Siren Ally.

Voiced by: Ray Porter
"I can't sleep anymore. I lie awake, haunted by the watchful eyes of those poor lost girls... waiting for us to find them."

The protagonist of the "Something in The Sea" Alternate Reality Game who was incorporated into BioShock 2 by fan demand. Mark G. Meltzer was an ordinary middle aged American citizen who developed an interest in a series of kidnappings of children along European coastlines, which unknown to him were being perpetrated by Big Sisters. Unfortunately, during his investigation, one Big Sister managed to follow him and kidnap his own daughter Cindy. He then dedicated the rest of his life to getting Cindy back, becoming one of the few Muggles aware of the existence of Rapture and one of fewer that managed to travel there. By the time Delta is revived, Mark is shortly ahead of him, searching for Cindy.

A working-class Rapture citizen who joins the uprising against Ryan.

A housewife who starts using ADAM against her husband's wishes. Her daughter is abducted to become a Little Sister

A star player of the Ryan's Raiders football team, Danny Wilkins started taking SportBoost plasmids to improve his game. As plasmids are most likely to do, this results in him going bonkers, narrating all of his murder sprees like a sports announcer describing a heated match.

A fearless pilot who journeyed to Rapture as part of a grand adventure. However, when life got dull again, she turned to plasmids. Now, there isn't a dull moment in Naledi's life - even if the excitement is coming from taking away other lives.

A bourbon baron back on the surface, Buck traveled to Rapture to bail out of being arrested for tax evasion. After establishing his bourbon business in Rapture, it became a prime target for anti-Ryan militants, and soon after the attacks began, his wife Clara vanished. Determined to turn all of Rapture upside down to get Clara back, Buck turned to plasmids so he could look for her in even the most dangerous places in Rapture.

A mentalist who performed in Fort Frolic, drawing in scores of crowds with his already impressive skills being enhanced by Plasmids. When Frolic and the other theaters are shut down by Ryan, Suresh decides that he was getting bored of the stage anyways, and opts to "-take (his) talents directly to the streets."

One of two characters available from the Zigo & Blanche DLC pack, which was initially available through pre-orders. A Spanish fisherman who worked in Neptune's Bounty. ADAM abuse has warped his mind to the point where he believes the sea is speaking to him and wants him to destroy Rapture.

The second of two characters available from the Zigo & Blanche DLC pack. A French actress who came to Rapture to captivate a new audience. When the theaters closed after the riots on New Year's Eve of 1959, she grew depressed and turned to ADAM abuse to cope. When the war starts, she begins taking part in it, finding it more enjoyable than the stage.

One of two characters available from the Sinclair Solutions Tester Pack DLC. Oscar had several pet cats on the surface, but was not allowed to bring them to Rapture until he met Frank Fontaine, who smuggled Oscar's cats into the city for him. After Oscar got addicted to ADAM, he fed it to one of his cats, Mr. Boots, to make him grow tiger stripes, but it also caused him become addicted to it, and Oscar was forced to kill Mr. Boots after he tried to steal Oscar's ADAM.

The second of two characters available from the Sinclair Solutions Tester Pack DLC. A former smuggler who worked for Frank Fontaine, he was eventually arrested and sentenced to Persephone for his crimes. He befriended another inmate named Knuckles, who disappeared from his cell one night and was apparently turned into a Big Daddy. Louie struck a deal with Augustus Sinclair to be let out early if he participated in field trials for Sinclair Solutions, so he could find Knuckles. 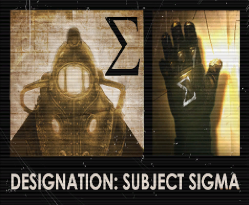 Voiced by: Carl Lumbly
"It's loss that brought me to Rapture. The loss of my wife, Pearl... The Thinker is all I've got, now..."

A brilliant mathematician, Porter worked for the allies in London during World War II, losing his wife Pearl to the German bombings. He accepted Andrew Ryan's offer to work in Rapture, building The Thinker, the ultimate processing machine, which he hoped to use to resurrect his dead wife. He was betrayed by his partner Reed Wahl and imprisoned in Persephone, but eventually escaped and teamed up with Dr. Tenenbaum and Subject Sigma to liberate The Thinker and flee Rapture. Subject Sigma is eventually revealed to be Porter, with the one guiding the player actually being The Thinker.

Voiced by: Keith Szarabajka
"In my limited time as its master, The Thinker has shown me so much. My outlook was... limited before."

The antagonist of the Minerva's Den DLC, Porter's former partner who betrayed him to take control of The Thinker alone, believing that it can be used to crack a perfect equation that can predict everything. 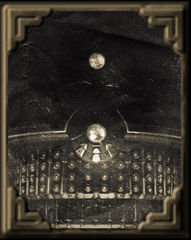 The computer created by Reed Wahl and Charles Milton Porter in Minerva's Den. It is a perfect Artificial Intelligence, maintaining the automated systems of Rapture and running Minerva's Den on its own. Porter, Tenenbaum, and Sigma want it in order to cure ADAM sickness. Unfortunately Wahl controls it, and desires to use it to crack the perfect predictive equation. It is sentient, and its true allegiance is unknown. It helps Sigma and Tenenbaum, by impersonating Porter while betraying Wahl.