Characters / Beyond the Boundary

This is the character page for the light novel and anime series Beyond the Boundary. Be wary of unmarked spoilers ahead!

A young man who loves girls with glasses, is half-Yomu, and is thus immortal. His mother is a busy Spirit World Warrior, and is often away from home. He meets Mirai when simply walking outside of their school and seeing her standing on the edge of the roof. Unaware of her powers, he mistakenly assumes that she's about to commit suicide. Their relationship begins with Mirai constantly attacking him as practice, but blossoms into a close friendship after he accompanies her on ventures to kill violent Yomu.

A young girl who is descended from a clan of Spirit World Warriors who are capable of manipulating their blood and turning it into weapons. Since this power was highly feared and envied, her clan was wiped out, and she was eventually the only remaining member. At first she constantly attacks Akihito because of his immortality, thus making him a good means of training, but becomes close friends with him after he agrees to help her fight normal Yomu.

Mitsuki is the youngest daughter of the Nase clan, a wealthy and powerful clan of Spirit Warriors, and shares the family power of creating cages, primarily defensive shields. She also uses a rodent-like youmu familiar in combat. Mitsuki is the president of the Literature Club and friends with Akihito; evidently this means she's constantly teasing him. However, underneath her initial unapproachable exterior is a Lonely Rich Kid who would very much like to have friends.

Hiroomi is the middle child of the Nase clan and Mitsuki's older brother. Much to her dismay, this also means he claims to have a sister complex, and much of his interactions with his sister result in her reprimanding him for his behavior. (They really do love each other, though). He's also friends with Akihito, with whom he gets along spectacularly.

Hiroomi shares his family's cage-erecting powers. He also fights with his scarf, which is enchanted to erase parts of the user's body.

A member of the Inami family who has very little spiritual power, and must rely on a special weapon to fight Yomu rather than her own power. She can't remember who exactly gave it to her.

A teacher at the school the main characters attend, she is a powerful Spirit Warrior with the ability to distort space. Unlike the primarily defense-based Nase clan members, her ability has many offensive uses.

An Interrogation Officer in the Spirit World Warriors Society who comes to visit the Nase family in order to monitor the Hollow Shadow. 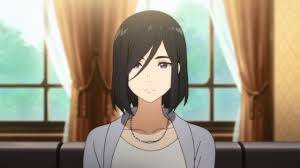 The eldest sibling and acting head of the powerful and wealthy Nase clan of Spirit World Warriors. Her ability to generate barriers are very powerful. 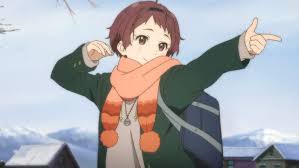 The deceased elder daughter of the Inami clan. 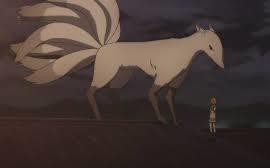 Ayaka makes a business out of appraising youmu and paying Spirit World warriors for the crystals youmu leave behind. She's also one herself, but prefers her kimono-sporting, humanoid form over her kitsune one. 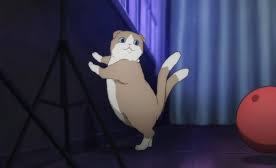 A very powerful youmu whose power distorts the space around it, resulting in the world gaining a purple tint and its outward appearance as a huge shadow, earning it its name.

Beyond the Boundary/Kyoukai no Kanata 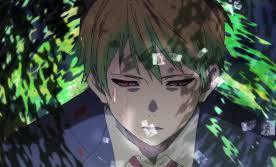 A youmu of inconceivable powers. Born of the negative feelings of countless humans, this massive entity has the power to destroy the world with ease.