Advertisement:
This page is for the original characters introduced in Sword of the Berserk: Guts' Rage and Berserk: Millennium Falcon Hen Seima Senki no Shō. Characters who first appeared in the Berserk manga should not be added, as they are covered by that work's character pages.
open/close all folders

Sword of the Berserk: Guts' Rage 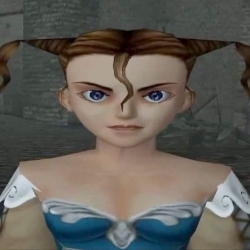 Rita (リタ Rita) is young street performer who meets Guts after he (indirectly) saves her and her troop from some bandits who were also trying to mess with Casca. Afterward, they meet Rita in the nearby castletown where one of her companions, who was infected by the Mandragora, turns into a monster and Guts kills it. When Balzac comes and greets Guts with a possible cure for Casca's insanity, Rita is taken to his castle as well - as a hostage. 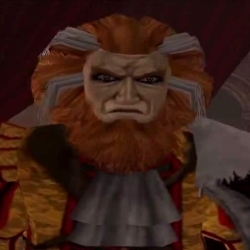 The noble ruler of a city that's come under the siege of Mandragoran creatures in recent years, Balzac (バルザック Baruzakku) claims he is trying to fight and understand them. However, he also has to contend with rebels among his subjects led by Dunteth who call him a tyrant and accuse him of conducting sinister experiments to weaponize the mandragora for his own ends. Taking notice of Guts' prowess in battle, he makes an offer to cure Casca's madness if Guts retrieves the heart of the Mandragora. 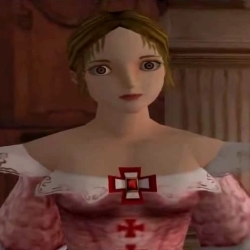 Annette (アネット Anetto) is pretty young woman in much the same state of mute insanity as Casca, who is discovered by Puck and Casca in one of the castle's rooms. She is the last loved one that Balzac has left. 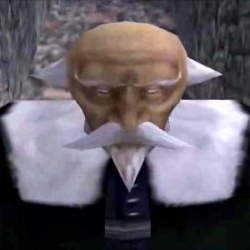 Gyove (ヨブ Yobu) is Balzac's elderly henchman who carries out his dirty work. He commands the regular soldiers, masked assassins, and the experimental mandragoran troops.

"Rita, you're still young. There will come a time when you will shed blood for your own cause. I just hope that it's something worthy of that blood." 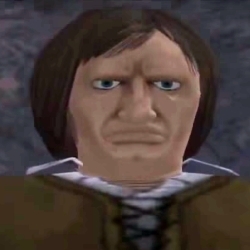 Dunteth (ダンテス Dantesu) is the leader of the resistance movement among Balzac's subjects, who leads Guts inside their hideout to explain Balzac's sinister plans and the grievances his subjects have against him. He is in a bind, however, because he and his wife have a baby boy who is infected with the early stages of mandragora possession. Guts tells him about the cure that Balzac has promised him, but Dunteth cannot stand the idea of having to negotiate with the very tyrant he's been rebelling against. It is only his wife and Rita's persuading that make him change his mind, and agree to accompany Guts to the infested village in search of the heart of the great tree. 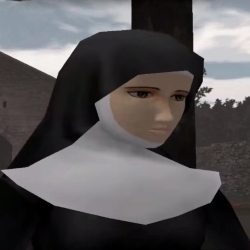 Eriza (エリザ Eriza) is a nun who lives in a village inhabited entirely by Mandragorans, and seems to be the only human who coexists with them. After replanting the mandrake that one of Dunteth's men unwittingly uprooted, she accuses Guts of killing the Mandragorans needlessly and tries to explain and defend the mandragorans' behavior to him. Recounting the tragic story of a boy named Nico whom all the villagers turned away when he was cold and starving, she asserts that the Mandragorans are innocent and harmless as long as they and their flowers are not disturbed, and entreats Guts to leave them alone. Rita objects that if left alone the mandragora will only spread and infect everyone, but Eriza insists the Mandragoran's peaceful and happy existence should be embraced rather than the lives of violence and suffering that most humans lead. After failing to persuade them, Eriza retreats to the Church. 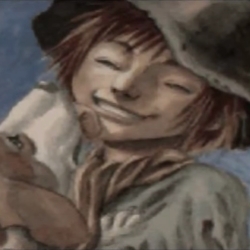 Nico (ニコ Niko) was a simple-minded young boy who lived as a vagrant in the village where Eriza's church stands, apparently with no family or companions except for his loyal dog. The other villagers never seemed to like him, often resorting to beating him with sticks and stones. He eventually became an Apostle, taking the form of a Mandragora tree. 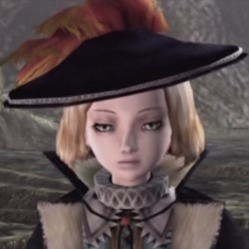 "If you can erase my world, then it can also happen the other way around."
"I give form to human thoughts. What you saw is the nightmare hidden in the depths of your heart. They are the regrets that haunt you, like a shadow follows its owner."

Charles (シャルル Sharuru) is a young noble who used to live happily in a beautiful mansion with his parents and his sister, Marien. One day, attackers burned the mansion down and killed everyone inside, except for Charles and Marien who escaped. In the ruins of their home, Charles found a Behelit that he used to turn himself into an Apostle and reclaim what he had lost, creating an illusory world of his own where he could live with Marien undisturbed. However, he either lost or repressed his memory of what he gave to the God Hand as a sacrifice. Many years later, Guts, Casca, and Puck happen upon his mansion, and Guts enters the Great Hall despite Charles' voice warning him to turn back. Charles curses Guts for shattering his world with his presence and causes the Band of the Hawk to appear before Guts and fight him.

When Guts meets him again in Qliphoth, Charles explains that the Hawks are projections of the fears and regrets inside of Guts' heart, and fights him using his magical powers after Guts succeeds in defeating the apparitions. Guts figures out based on what Charles has told him that he sacrificed his sister in order to become an Apostle, and that the girl following Charles is merely a shadow of Marien that he created. When Guts spells it out to him, Charles refuses to accept the truth, transforming into his butterfly-shaped Apostle form as he screams that he's going to kill Guts. Guts mortally wound him in their battle, and Charles dies while slipping back into the illusion he created in his mind.