Voiced by: Mariya Ise (Japanese), Trina Nishimura (English)
The sole initial member of the Half Priced Food Lovers Club, she serves as Satou's guide through the world of half priced food brawls. Her turf is Hocky Mart on the east side.
Hana Oshiroi

Voiced by: Aoi Yūki (Japanese), Felecia Angelle (English)
A friend of Satou who also gets roped into the Half-Priced Food Lovers' Club by Sen along with Satou. A novelist whose specialty seems to be yaoi.
Yuu Kaneshiro (Wizard)

Ayame Shaga (Beauty by the Lake)

Voiced by: Emiri Katou (Japanese), Morgan Garrett (English)
Satou's cousin, known as the "Beauty by the Lake". Her turf is Ralph Store on the west side.
Ren Nikaido Two Dogs (w/ Satou)
Voiced by: Kazuyuki Okitsu (Japanese), Ian Sinclair (English)
A fighter for half-priced food from the east side. He was formerly The Dragon to the Monarch and leader of his pack of goons, the Gabriel Ratchets. Has a thing for Matsuba.
Kyo & Kyo Sawagi (Orthros) 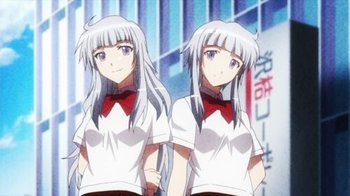 The elder, long-haired one fell in love with Sen because she defeated Monarch. 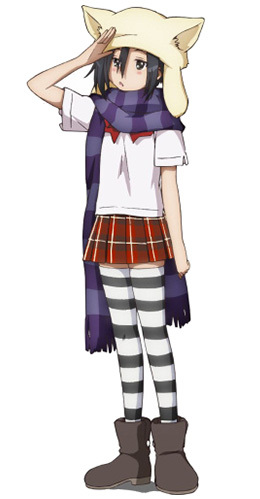 Voiced by: Ayana Taketatsu (Japanese), Lindsay Seidel (English)
A perpetually unlucky kid who studies in Ayame's school, so much so that it spreads to other people. She is completely oblivious of her own bad luck.
Tadaaki Endo (Monarch)
Voiced by: Hiroki Yasumoto (Japanese), Chris Rager (English)
A large man who is obsessed with becoming the strongest brawler by inheriting the Monarch Butterfly's position, forcefully or otherwise, and defeating the Wizard's successor.

Voiced by: Ai Kayano (Japanese), Tia Ballard (English)
Ume is the Class Representative of Satou's class and Oshiroi's childhood friend who's a bit too possessive of her. Fond of abusing Satou in retaliation for any perceived slight against Oshiroi, no matter how small.
Kiku Matsuba (Monarch Butterfly)
Voiced by: Sayaka Ohara (Japanese), Caitlin Glass (English)
A veteran wolf who retired after she got married. She is now currently the God of Discounts for Ralph Mart.
Club of Heracles
Voiced by: Akira Ishida (Japanese), Clifford Chapin (English)
A wolf from another town responsible for the downfall of Orthros three years ago. Rather than beating the twins in a fight, he reasoned that they were so strong that they were disrupting the balance of the brawls. His solution to this was to simply let them walk up and take the bento they wanted, and then begin fighting after they left.
Mikoto Uzu (Wolfsbane)
Another member of the Half Price club. Only appears in the prequel manga.