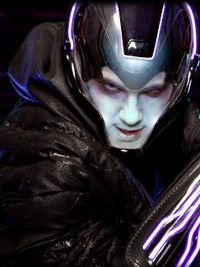 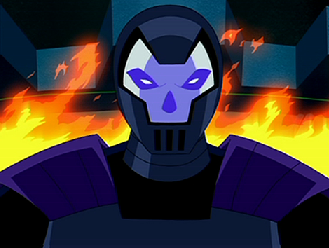 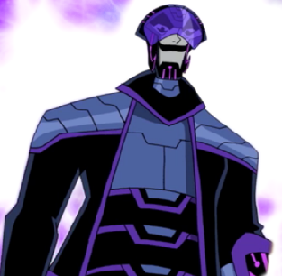 Played by: Christien Anholt (Race Against Time)
Voiced by: Yuri Lowenthal (Ultimate Alien), Judd Nelson (Omniverse)
"The only predictable thing about me is that I'm unpredictable!"

A villain who was first introduced in the live-action movie Ben 10: Race Against Time. Eon's origin is... complicated, in that he's been given two entirely contradictory ones across his few appearances.

In Race Against Time, a live-action adaptation confirmed to take place in a non-canon Alternate Universe, Eon was presented as a Chronian, a Human Alien whose species was trapped in a different dimension and who was attempting to bring back his species through an artifact called the Hands of Armageddon to invade Earth. Since he himself was no longer able to activate the Hands, he captured Ben and forced him to turn into him, hacking the Omnitrix so his personality would take over. Ben, however, was brought back to his sense by Gwen, and then seemingly defeated Eon by throwing him through the Hands of Armageddon.

Another version of the character appears in the Ultimate Alien episode "Ben 10,000 Returns". He comes from an Alternate Universe but travelled into the Prime Timeline, where it's revealed he has been travelling through timelines chasing alternate versions of Ben. It's eventually revealed that he is actually an alternate version of Ben 10,000 who went evil and started travelling to absorb all the alternate versions of himself, turning them into his minions and intending to create a single timeline where he would be the only Ben Tennyson. He is eventually defeated when Ben and his future self destroy the Hands of Armageddon, supposedly erasing Eon from the timeline. This version of the character reappears in Omniverse (albeit with more similarities with the movie version in his design). After Paradox trapped him in the Prime Timeline (particularly the past, present, and future), Eon attempts to get his hand on the scientist's Chrono Navigator, leading to a complex episode where 11-year-old Ben and 16-year-old Ben get their places switched.

You are different than the other drones. Stronger. Together, we could rule everything.
The Hive Queen, to Nanomech

The villains from the second live-action movie "Alien Swarm". The Hive is an army of living, techno-organic, bug-like nanochips with the ability to both infest people in order to take over their minds and fuse together to form various structures. They were discovered by Plumber's member Victor Validus, but the others refused to believe him, and they ended up taking over him. Eventually, the Swarm was stopped when Ben used the sample of their own species, Nanomech, to reach the Queen inside Validus' brain and apparently kill her. They eventually come back in Ultimate Alien, where it's revealed that the Hive Queen Ben killed was actually a decoy, while the real one hid inside Validus' daughter (and Ben's childhood friend) Elena. Eventually, Elena's personality fused with the Hive's mind, causing her to become crazy and turn into an Ax-Crazy Yandere. 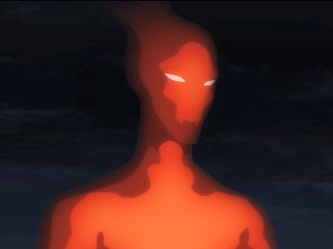 "why there is so many brothers"
Voiced by: Michael Emerson
Alpha is the original control nanite created by Cesar but sent to an empty dimension, where he started attempting to merge with organic lifeforms in his pursuit of a stable body. Unfortunately, that universe turned out to be the Null Void. He found a host and forced a return to Rex's world, accidentally taking Ben with him and setting up the crossover.